Comedian by Maurizio Cattelan, is it an artwork? This is the question that many people have wondered, as many as who were to Art Basel Miami Beach (ABMB) as those who found out by the press or social media. Along with this, the question comes straight to mind about the piece’s price, how is it possible that a banana, perishable, reach USD120,000? And, not only that, was sold in more than one version?

These questions can be answered in history, in Duchamp’s theories about what is or isn’t art; in the idea that depends on where it is, i.e., whether it’s in a museum, or just because it’s there it’s a work of art? Or does it really need to generate reflections on humanity, on social problems, on the political context, on the economic crisis, inequality, injustice; to generate questions, ideas; that we manage to glimpse, even for a few moments, that there is something beyond what we see every day, that we can aspire to something different. Well, in this regard, let’s analyze Comedian on the basis that a piece should aspire to the last points mentioned here and leaving, clearly, the technique aside.

Contextually, Comedian positioned itself in one of the most important art fairs in the American continent, Art Basel Miami. A fair that, for a large part of the artists from the same region, is absolutely unreachable, as is the case with the galleries that are located there and, in general, only work with renowned artists. Very few Chileans, in fact, have managed to be among their panels in recent years, not counting Matta. From there, the Italian artist’s work already has great merit, as it is not easy to reach this fair space that sets trends for the market -especially Latin America- during the following year. How is it known? It is enough to simply see the evidence: in 2018 the fair left its spectators shocked when they saw that among the works found there, painting, a return to color, figuration and abstraction prevailed. What effect did it have? The fairs in 2019 followed their example, the gallery owners understood that it was time to diversify their stands and instead of the sculptures and installations that were taking over the world, they took back the painters and nailed their works in every panel they could in the fairs in Spain for ARCO, as well as in ArteBA in Buenos Aires, ArtBO in Bogotá and, clearly, this year in Untitled and again in Basel Miami.

The Italian artist, on the other hand, has great merit and this is perhaps one of the reasons for the value of the work, added to the gallery that represented him in ABMB. The works of Maurizio Cattelan have a high commercial value in relation to the works of our continent, among them we can find The Toilet made of 18 karat gold, valued at more than 5 million dollars[1]. He has participated in exhibitions in museums of the stature of the Solomon Guggenheim Museum in New York, the Louvre Museum in Paris, the Museum of Contemporary Art in Los Angeles, the Museum of Modern Art in New York and has participated on five occasions in the Venice Biennale, among many other exhibitions. And, clearly, there are already collectors eager for his works who are surely interested in each new piece of the Italian artist. He has a part of the market insured, his works usually generate controversy and monopolize the media, both massive and social networks, so it is not new that a work of such a renowned artist, in such an important fair, reach these prices. 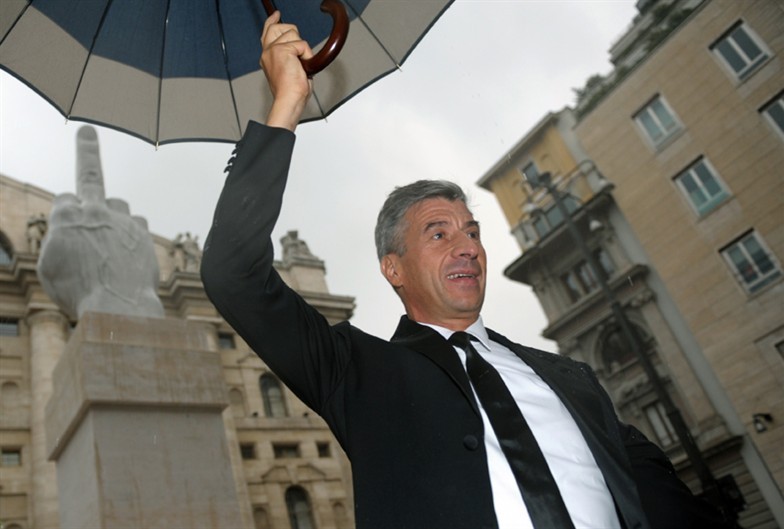 But, beyond the artist and space, we can question the work itself, what could a banana represent? Let’s start with the easiest and most comical idea, its phallic form. Practically everywhere in the world the banana is associated with the male member, so seeing it hanging on a wall with an “ordinary” adhesive tape could lead us to think about being a man today, a role that is increasingly questioned by its dubious existence in a social context where feminism is becoming massively global and in which the man seems to have no place. Has anyone ever heard about movements like #Metoo #Niunamenos or the new trend that has generated #LasTesis? On a historical level, the existence of testosterone and phallus have always been responsible for women being tormented, harassed, abused and raped. Who hasn’t ever read or heard a man say that “it couldn’t be controlled”? These impulses, now, seem to be hanging from a wall with ordinary adhesive tape, about to fall, about to be sold, about to go down in history as a moment of decisive change that we need to recall.

Practically everywhere in the world the banana is associated with the male member, so seeing it hanging on a wall with an “ordinary” adhesive tape might lead us to think about being a man today.

Mr Cattelan, Knock down that wall

Now, the banana is not merely an object with sexual connotations, it was also the symbol of the Latin American continent for centuries, or even today? We will always be banana-producing countries and in Miami they have always known this. Miami is the most Latin American city there is, speaking English is absolutely unnecessary and as one driver commented, “even those Americans who live there have a Latin accent. The notion of “banana-producing countries” comes from countries that cultivated bananas as one of their nation’s strong incomes and so in the 19th century they were subjected to various forms of corruption and exploitation linked to the strong economic domination of this fruit product, of which the United Fruit Company owned a large part of the market and therefore exercised great power in Central America until the end of the 20th century. For this reason, with the passage of time, the concept was adapted to refer to the Latin American countries that have strong corruption problems, socio-political-economic disorders, high levels of poverty and, evidently, third world, can we think of these countries today? Has the notion of “banana-producing countries” changed? What is happening at this moment in our region?

And voila, we have reached the highest point that some art critics and historians will take years to deepen. How can it be that a piece that was only presented as an irony toward the art market, comes to make sense with the current Latin American crisis in a city as Latin as Miami? Yes, the continent is experiencing a radical socio-political-economic crisis. Many blame Donald Trump’s policies, which would be to see the United States doing what it wanted with its backyard-banana countries; others blame Nicolas Maduro, who would again see the left trying to take over a territory that seems legitimate to him? And we go back to the Cold War conflict as if we were going back in time to see how we continue to cultivate those bananas that today are hung on a panel at one of the most prestigious fairs on the continent; Latin America, ad portas of entering the market; of making a presence through its historical icons; of generating changes that can be radical and fundamental for society; of a revolution that seems to be affirmed with an ordinary adhesive on a U.S. wall, which when it finishes, will it simply be able to tear down this wall?

Perhaps, just perhaps, these ideas are too literal for an artist with as much recognition as Maurizio Cattelan. And, probably, it is because of this that was replicated in different fairs in the city, by different artists in different forms and formats; or perhaps it was only because it is an entertaining parody of what art, life and today’s society are, that it is replicated in different formats, techniques and -clearly- without content. Not for nothing, Comedian has the name of the dramatic genre that makes you laugh with happy endings.