Coinciding with the week of art in Madrid and the opening of ARCO Modern Art Fair, Cuban critic and curator Andrés Isaac Santana proposes to us SoloGood. An exhibition organized around the dialog between the work of three important artists from Costa Rica, Montserrat Masalles, John Paul Fauves and Aimée Joaristi. We publish here a few words by the curator accompanied by an excellent text by the prestigious Spanish critic Fernando Castro Flórez.

When we stop being alone

Any attempt to write about humor inevitably ends in an atrocious dissection or, worse still, in the height of boredom.
Academics seek to understand laughter when what we are familiar with is the grimaces, transformed into masks that we cannot take off so as not to reveal that perhaps there is nothing underneath. We have, it is true, stored appointments to”salt and pepper” the indigestible stew. Schiller always has to be within reach, even if only to avoid having to assume what he thought; for example, the letters on the aesthetic education of humanity seem to suggest that emancipation requires a game that is perhaps the most serious. The saturated “I” (when the Shakespearean sentence that time is out of joint is fulfilled without drama or poisoned swords) knows how to follow rules and knows the appropriate toolbox that structures a language game that invites us to swing between the like and the ”hahahaha” of the social network. I don’t want to be a doomsayer and neither a reincarnation, pathetically as it should be, of Laoconte (devoured in this case by his “followers”), but to confirm that the contemporary homo ludens is “petrified” in the boredom of a just-for-fun.

In the midst of the epidemic of the anodyne posture, Andrés Isaac Santana (a critic who does not know discouragement and who is still capable of maintaining an extraordinary enthusiasm when he writes or is moved by the confrontation with the real presence of the works of art) curated an exhibition with three Costa Rican artists:  Aimée Joaristi, Monserrat Mesalles and Lefauves. SoloGood is, in the words of the curator,”a crossed dialog” between those artists whose common feature is “a playful relationship with art”: “the proposal focuses on that area in which the work becomes a locus of entertainment and expansion, beyond its conceptual-semiological density”.
It is the first time that we can contemplate in Madrid a meeting of such prestigious Central American artists that, as Andrés Isaac Santana points out, would come to exemplify some of the most important processes of current art: deconstruction, appropriation and recycling. 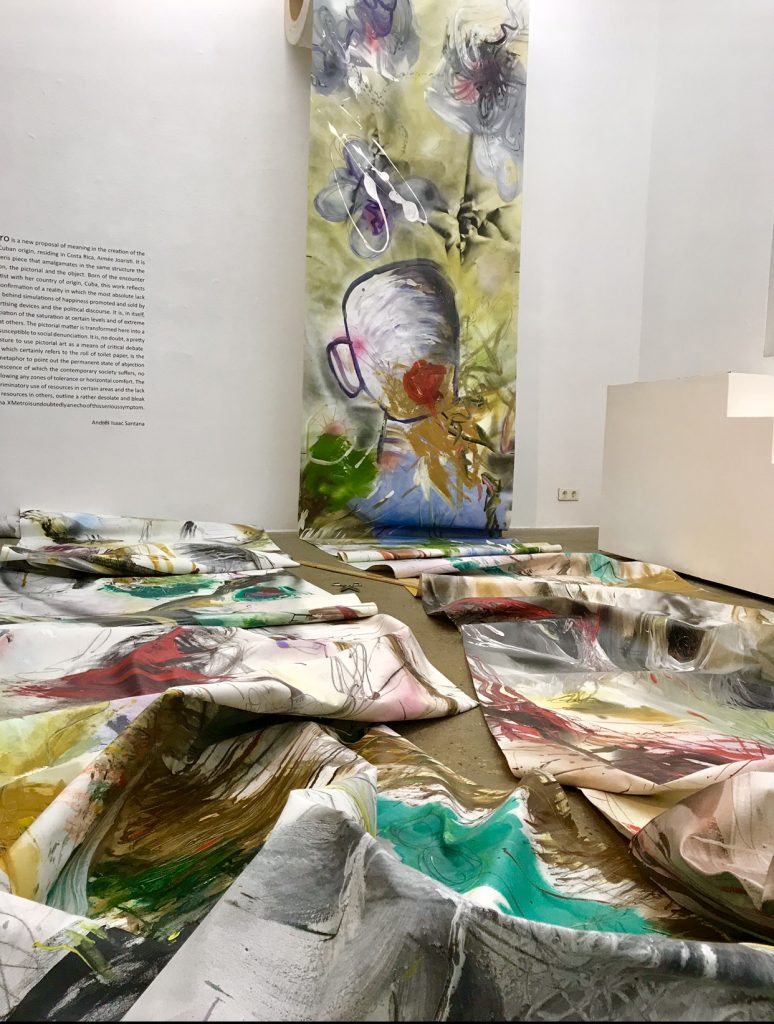 If Aimée Joaristi displays a powerful abstract painting, Montserrat Mesalles turns the objects into”funny” characters and Lefauves proposes a post-pop figuration that has a lucidly provocative tone. Beyond the”funerary” discourse (marked by a truly acritical “technological Darwinism”) about painting, Aimée Joaristi and Lefauves assume their passion without alibis, avoiding the anguish of influences, convinced that art is a modulation of obsessions. Gestures and chromatic sedimentations (in the case of Aimée) of impressive vigor, large-scale paintings that”expand” beyond the usual format or”erotic” metamorphoses (perpetrated by Lefauves who has something of a polymorphous perverse twist) of Walt Disney’s characters, appropriations that saturate the “Warholian Mao” with a shattered Mickey Mouse, works, that go beyond fashion to impose an untimely and radically contemporary imaginary.

If the cartoons mutate from children’s fun to the disturbing masquerade of Lefauves, in the case of Monserrat Mesalles she displays a poetic recycling that goes beyond the surreal objet trouvé or of the duchampitis that assumes the ready-made as mere rhetoric of pedestalization. One hundred years after the Fountain signed by R. Mutt, when the only horizon we are contemplating is that of the “society of the spectacle”, we must demand artistic processes that are not complicit in anesthetic aesthetics. The three Costa Rican artists in the SoloGood exhibition would come to dismantle both the self-absorbed (solitary) position and the criteria for validating inertial actuality (a way of being “good” that should be in the wake of “what one wears”), inviting them to okupar (occupy) other spaces, showing unequivocal features of enthusiasm, revealing that hospitality is fundamental in art. Andrés Isaac Santana dares to write that this exhibition invites us to”enjoy”, aware that this incitement to play and to seek aesthetic pleasure is, in a time of chronification of yawning, a provocation. SoloGood offers us magnificent works to enjoy and for this only one thing is needed: to be ready to “let yourself be seduced”.

SoloGood, proposes a  – crossed, superimposed and emphatic- dialog between the work of these three Costa Rican artists of international projection. Each one, in his own way, substantives a type of playful relationship with art, especially in the execution of its artifactual dimension. The proposal focuses on that area in which the work becomes a locus of entertainment and expansion, beyond its conceptual-semiological density, locked in the thickness of other people’s discourses.

Two features or signs stand out, in a kind of identity claim, from the general set of his works. On the one hand, the principle of deconstruction-appropriation-recycling; on the other hand, that drive that leads them to formalize a visual artifact of clear, strictly contemporary aesthetic connotations in which the substantive register takes a playful approach.
The three, in different ways, are eloquent repositories of the aesthetic and discursive lines that diagram the cartography of 20th century art: The informalist abstraction as a reactive gesture and visceral register; the deconstruction of the pop icon and its postmodern perspective in relation to pastiche and parody and, finally, the rescue of the Duchampian ideology focused on the recovery of the object and its elevation to an appealing aesthetic status. 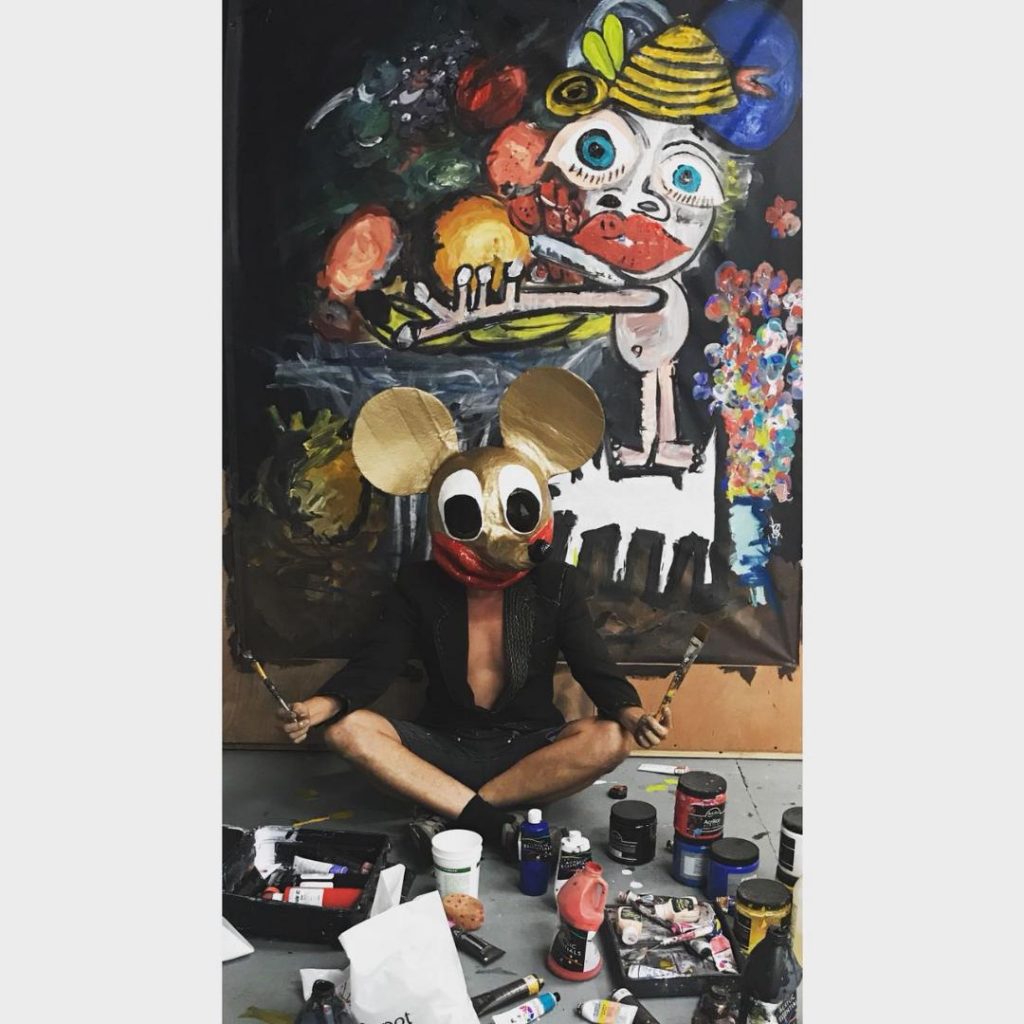 SoloGood, beyond any hard conceptual pretension, wants to reactivate a staging in which the indexes of enjoyment and the comfort of complacency are recovered. This project is more interested in the soma than the seme, emphasizing the visual quality of the works and their levels of seduction. It is of interest, more than anything else, to foster this immediate link between the artwork and the spectator, tilting the hegemonic place that the text acquires (critical or curatorial) in the understanding of the contemporary aesthetic proposal.

Aimée Joaristi is one of the most renowned abstract painters – with an informalist accent – on the Central American scene. Born in Cuba, she has spent her entire life outside her native land, in a kind of permanent exile. She has been living in Costa Rica for many years now,where she centralizes a large part of her pictorial production, backed by the prestigious Klaus Steinmetz Contemporary gallery. The most salient feature of his painting is anger. A way of proceeding in front of the support that turns her into a beast of matter, thus, her pictorial exercise acquires a performative and confessional character . Her work has been exhibited in many fairs, biennials and collective exhibitions of Latin American artists beyond its borders. She has exhibited regularly in Costa Rica, Cuba, Mexico, Guatemala, Spain, Ecuador, Germany, Chile, Latvia and the USA.

Montserrat Mesalles was born in San José, Costa Rica, where she currently lives.
Her work is an exceptional case in the objectual dramaturgy of artistic practices in the Latin American context. Her work focuses on the recovery and restitution of the value of objects that accumulate in industrial cemeteries. These objects, in their strict condition of works of art, enjoy a discursive duality: on the one hand, they respond to the statements of amusement and aesthetic distraction; on the other, they support a call to attention in the face of the paradigms of contemporary ecological discourse and all policies of sustainability and conservation. Mesalles is not a sculptor in the traditional sense of the term. She is, by far, a maker of great metaphors, an architect of new dreams, an artist who assumes -in the first person- the essential commitment of art: to be a voice that speaks and challenges the strange dynamics of this world of ours. Her work was shown at the last edition of the Venice Biennale, in the Personal Structures program: Open Borders.

John Paul Fauves was born in Costa Rica in 1980. Considered a enfant terrible of painting, he is said to be a beast of interpretation and execution of it. His post-pop figuration of a playful inclination – with a provocative tone and air – leads him to gain very large groups of followers in Instagram and other social networks. Convinced of the power of the image and of its iconographic appeal, he undertakes a maneuver of appropriation-emptying-extension of the reference that always plays in favor of the work, of the massive taste for it and of its fixation on the retina. Fauves is a kind of perverse polymorph that intervenes, as in an erotic dance, the characters of Walt Disney causing symptomatic displacements and allusions in the simultaneous game of masquerades. Magazines such as Vogue and Forbes, have welcomed in their pages the work of this young artist who is, without doubt, one of the strongest pictorial bets of this geopolitical area, called the dubious strait.