For human beings there are several ways to move from one place to another: an automobile, an aircraft, a ship or their own feet. The only variant that keeps the same is all that happens during the trip from A point to B point, to that experience we call it “trip”. The trip encourages the reflection, the sighting, and the acknowledge of the way is, by itself, an act of recollecting images. From the impressionism, the relation between the artist and the landscape is strengthen, but it doesn’t end there, the contemporary art also find its place in the non-place of moving.

These reflections are the result of self-absorption during the journey to Matucana 100 by bicycle, I am addressing the exhibition Las enseñanzas del cerezo of the Colectivo MICH (International Museum of Chile), a group composed of: Simón Catalán, Pilar Quinteros, Sebastián Riffo, Héctor Vergara and Carolina Herrera, who propose an experiment that tries to return to position the practice of drawing in the current panorama of Chilean art.

The MICH route traces a transversal axis joining the coast, valley and mountain range, as a primitive line that affects the geographical representation of our country in the world map. The unexplored territory serves as a creative detonator and the direct relationship of the body with nature encourages an intensive doing. It teaches us new approaches to drawing, understanding it as a graphic language that builds reality.

The show is highlighted by the diversity of pieces, the most common as the drawing to the wall share space with video and sculpture. As if it were a huge workshop with projects that are in the process of research.

The first thing that comes to mind are a couple of moles of great presence that at the same time are soft and organic. They are located suggestively next to a cube that serves as support for more drawings, the challenging interaction between the organic form and the geometric rigor seems to be giving us a classic drawing lesson. These pieces provoke an ambiguous feeling between camping tents and rock walls, composed of cooked fragments to generate volume. In this case, the drawing seems to be absent in the format, however, a second look reveals that the constructive system of the seam is similar to the drawing, the line that joins two points. 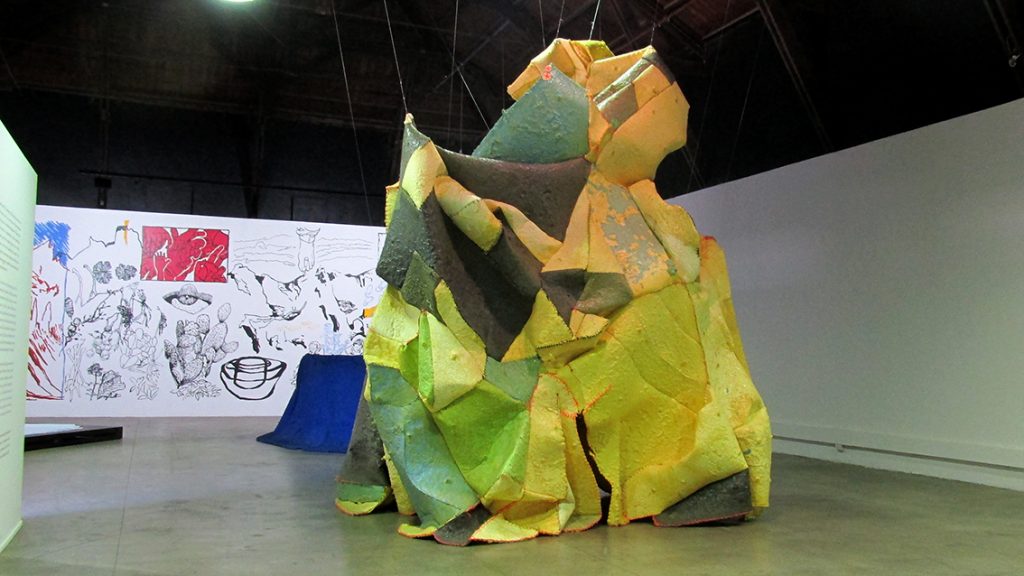 On the floor there is a large format book that brings together sketches made during the trip, a more traditional approach to the territory, such as a rudimentary map or the record of organic findings. The strokes seem more methodical than expressionist, more like a physical map than a Rorschach test. It is worth mentioning the gesture of the manufacture, the traditional binding and the drawing as a link between the hand of the artist and the work.

Going through the same landscapes that a traveling painter like Rugendas could have stepped on, collecting material as a self-absorbed and solitary work, in this case it becomes a collective experience, which provides a wide range of views and conversations. MICH is defined as an autonomous management project that takes care of affective and effective bonds among its members, the collective consciousness is represented in the sample when we can identify different gestures. In the walls of Matucana 100 a series of drawings dialogues in the virtual space of the white background, a kind of exquisite corpse formed by portraits, botanical drawings, geographical reliefs, etc.

The convergence of lines of work between the artists are not the only ones present in the room, the exhibition opens to the public with the help of “Tables of drawing”, which were held in 4 sessions where the modality allowed dialogue and participation of new aesthetic, cultural and generational visions. The workshop where these sessions are held is part of the exhibition, however, while the drawing tables are not made it seems almost private, at rest until the presence of people activates it. 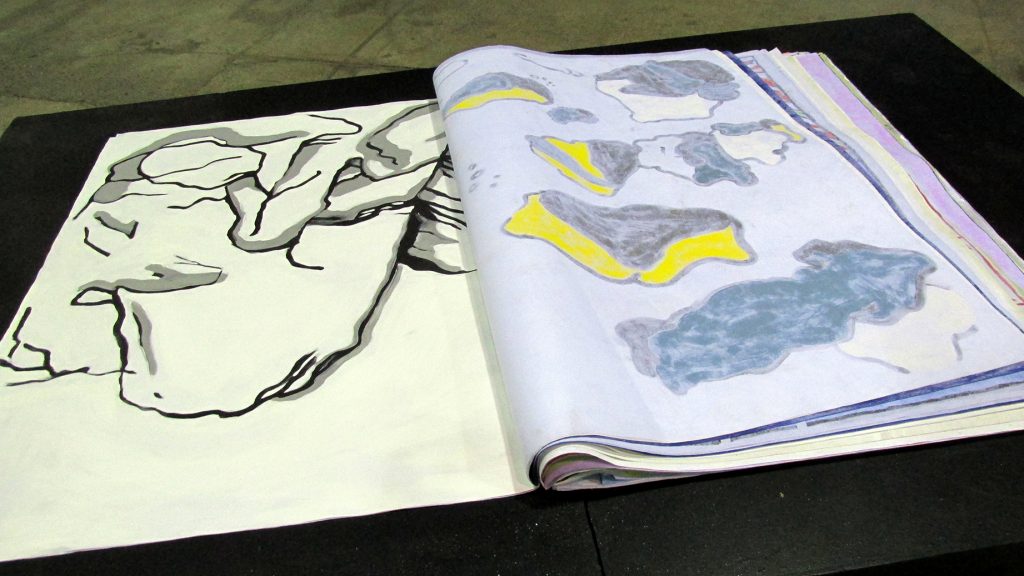 After traversing the exhibition for a while, the white walls of the museography become more seductive and begin to look like a blank page. The drawing teaches us that the union of two points through a line can represent the whole world, so how can we stop this primitive impulse so human? Perhaps imprinting a trace in a cave, tracing the shadow of a loved one projected on the wall, tracing the plans of a Baroque church, drawing nature outdoors or graffitiing through the streets of the city.