Of white hair, fearful and earthy clothes asked: Can I come in?… “yes! of course, welcome” answered the boys in the entrance. She was so surprised that, as it is said, she smiled from ear to ear, and she, who is about 70 years old entered as an exctied child, she even tripped. Then I knew that it was a good place. The chimkowe, which means “meeting place” does not come from Mapudungun exactly, it is rather probably a linguistic mixture, considering that Peñalolen is one of the communes with the most Mapuche origin people.

Between the seat and the central court there is a capacity for 4500 people. It was full. Before the show started the audience had already met and, in a way, embraced each other. On a giant screen, through which they would later transmit the show to those further back, they showed the faces of the audience, mostly children, who, after the impression of seeing themselves, greeted, kissed, smiled and celebrated, causing tenderness and laughter until a Mapuche flag reached the screen, then the hug became stronger and protest songs echoed on the walls.

It began, the applause was not long in coming for the historic Inti Illimani and the great scenery behind its back, it would be unfair to say that only the children were surprised, many mature faces stunned, many adult smiles uncovered. The testaccio market sounds, a colorful house and above it a calaca in the center, paper mills and flowers among them, then Malè enters, the little Haitian girl managed by the cast of the theater company La Mona Ilustre. The colored flags hang, the seagulls come alive, or at least move, and the lights harmonize and content the place throughout the show depending on the song that is played.

It was in 2010 when the band released the album Travesuras, which translated into Creole takes the name of the little girl: Malè. Joyful rhythms, Latin American and children’s lyrics characterized the new album, which fortunately was heard by Paula Barraza, director of the work and who from that moment thought of the project, with the intention of bringing children to the catharsis that music achieves in a concert. My mom and dad, Quinteto del tren and Drume negrita were some of the songs that moved and managed to shake the feet and hands of the audience.

Playful, the little ones begin to come close, and of course, I must admit that I was envious of having a father, mother or grandfather holding your hand on the edge of the stage, where the colorful and fluctuating puppets mixed among the musicians and among themselves. Giant figures, with thick strokes and vibrant colors, funny, elusive and generous! Between the black Diablo fish, which had nothing in black, and the bird inspired by Mexican alebrijes, they exchanged their legs as they flew and jumped around the stage. 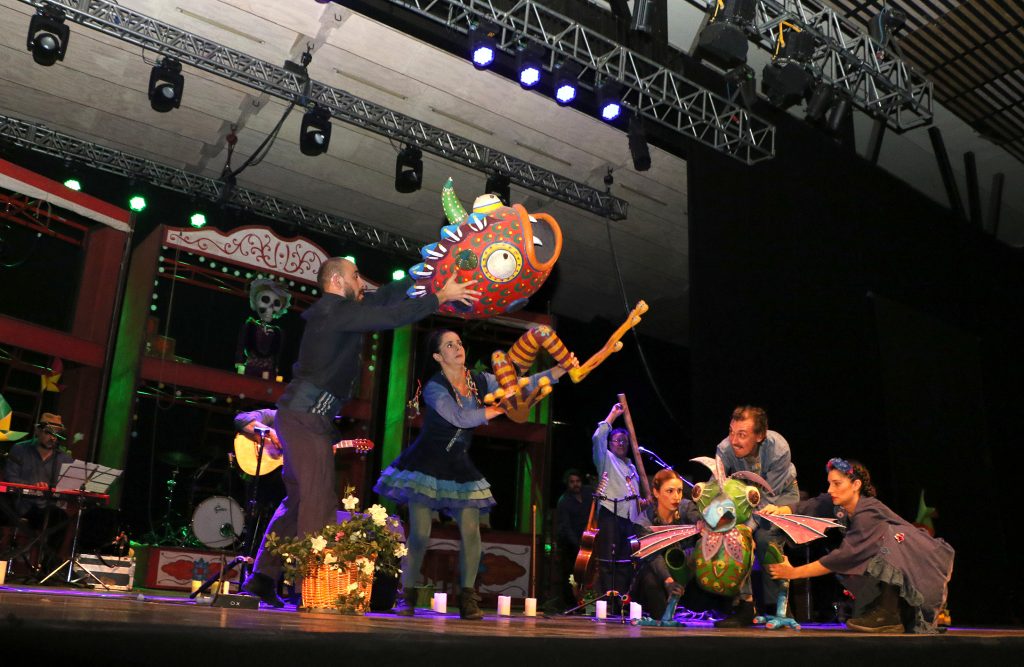 Horacio Duran takes the microphone and referring to Malè talks to the audience: He explains that she is not from here, that she is very far from her home, and that like her, it is important to receive those who come, to welcome them with love and to take care of them. Thank you.

In the middle of the show and with a sweet and emotional rhythm, the calaca comes down from the big structure and she realizes that every time she plays something, that something stops, either the mill or the music itself. With grief she touches her heart, because in spite of being a skeleton she has one, so she is sad, her long hands pass under the holes where her eyes would go, she sits on the edge of the stage and with her dress she tries to wipe her tears. The laughter stops, because the sadness moves to the seat. Then Malè arrives, picks her up and together they go for a walk, where joy takes up the space again behind amusing Chinese shadows. The little girl is amused by death, there is no reason to fear it, if she is even a good dancer, she does not leave the stage without first taking Horacio by the hand, caressing his back and dancing. 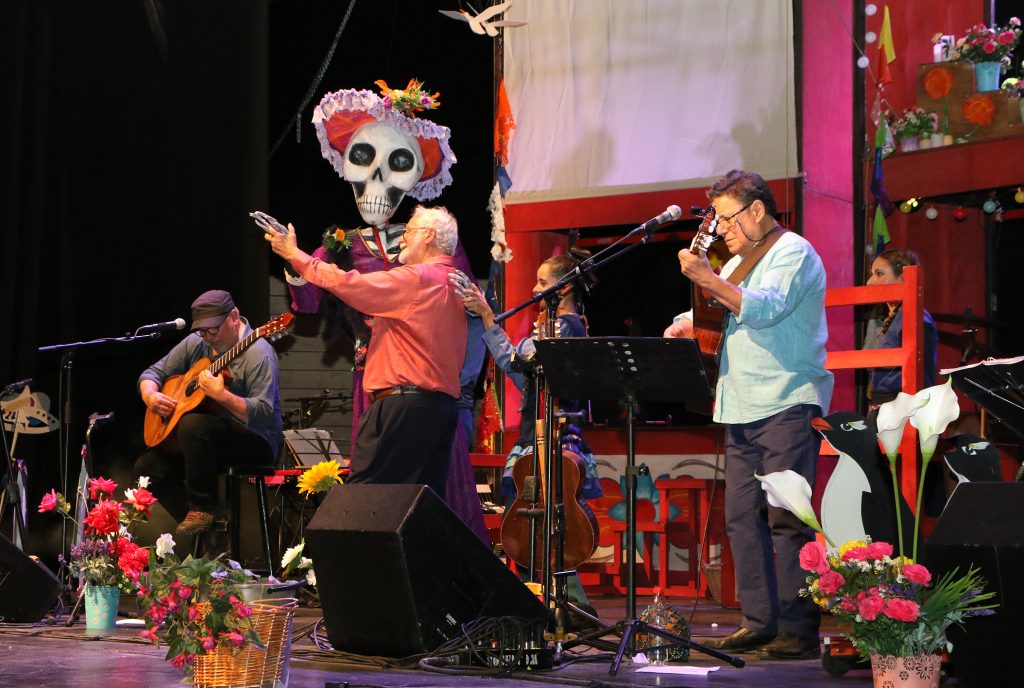 The concert is about to end, it’s been a little over an hour and then it starts to sound… How could it not sound, so expected and acclaimed: The people united. How to describe that moment, here I go. The little ones raise their colored handkerchiefs while the adults raise their left fists, the light turns the stage pure red and the voices of Inti Illimani are warm with the strong clamor of their listeners, now she shares: “The united people will never be defeated!” In front of me, a mother and her teenage daughters raise their fists, to my left a man in his forties wipes the tears falling from his face. The last song ends and in front of us, the whole cast bids farewell, and for them we all stand, because there is no other way to applaud such a powerful performance, to celebrate that feeling and even if it sounds cliché, the union.

We get up from our seats, the chants of the demonstrations continue the show and the looks that cross are now different, they are close and welcoming. And I must admit that although I have tried, with all my tools, to express how fun and exciting this opportunity was, there are no words that can describe what it is like to be there. A show worthy of touring the country, worthy of all the spaces it could occupy and elaborated for the whole family.