Theater is one of the most affected arts by the quarantine, but today online alternatives are available to fight the lack of stages. On the one hand we have Escenix, a streaming plaftorm of theater that amounts thousands of users in its first day, on the other hand Municipal Delivery, which brings stagings of Municipal Theater to home. If we add Ondamedia and the free access to its catalogue during quarantine, the ways of spend this time of isolation are funnier. 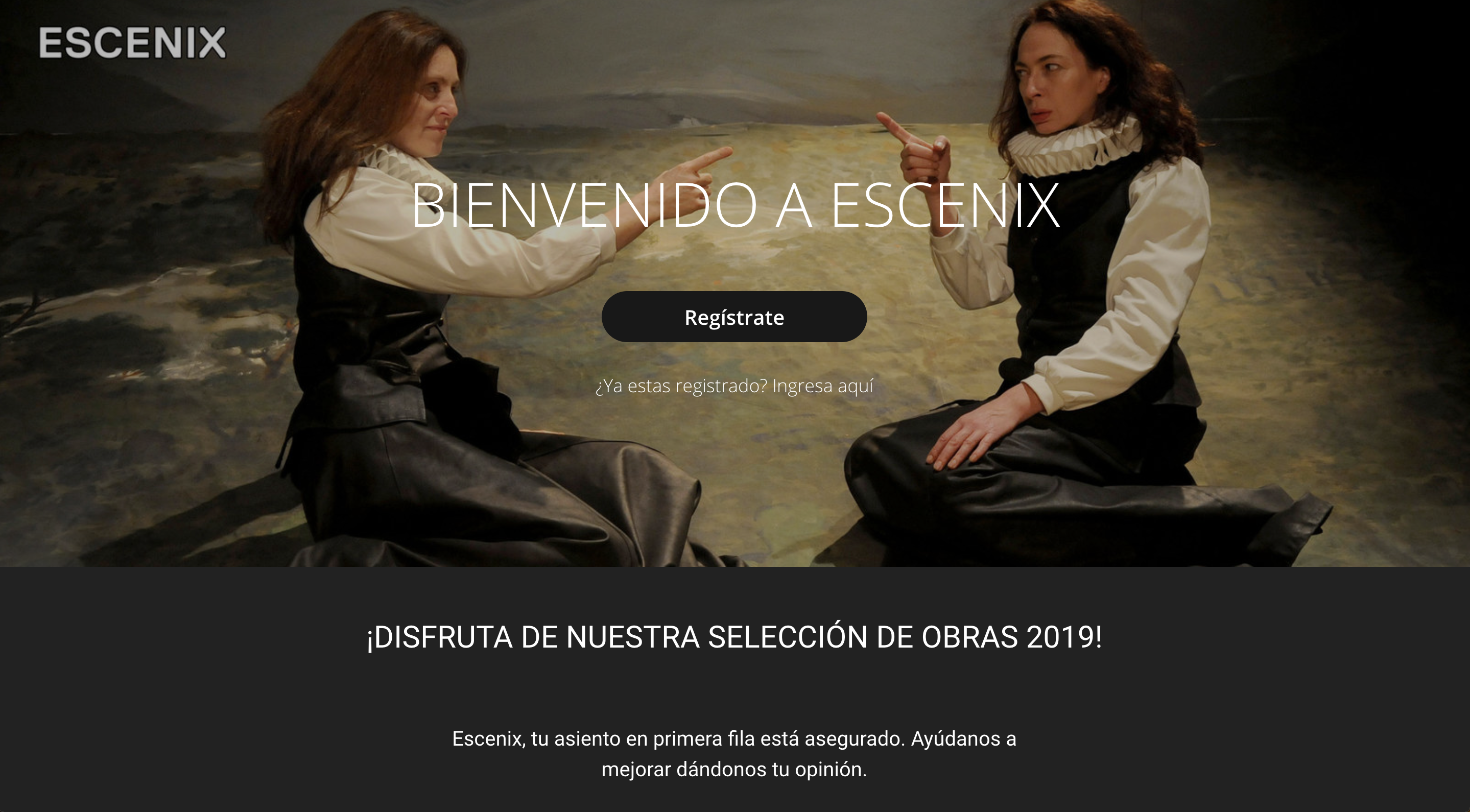 
“The Netflix of the Chilean theater” to that its creators point out, Natalia Rivadeneira and Esteban Larraín, with this service of online streaming plays. With free access and an award-winning catalog, Escenix begins its functions this Friday the 20th, and the first hours of operation of the site have already registered thousands of users. The offer of creations by Chilean companies premiered in 2018 and 2019 that can be accessed from the escenix.cl, site is also available for mobile phones (iPhone and Android). Among the works already available are Xuárez, Greta, A la cabeza del ganado.

In this respect, Patricia Rivadeneira says “Escenix is a streaming platform whose vocation is to bring shows to homes in the best possible quality, so that users have an optimal experience, bringing them closer to the performing arts, generating new audiences, allowing the repetition of works that moved you or that you did not manage to see. We want Escenix to also become a heritage archive and, furthermore, to exchange works with other platforms in the world. Ours, by the way, is among the best for quality of registration and edition”.

On the editing section, Rivadeneira delves into the promise of 4k quality and several cameras to adapt the format of the theatre to that of the screen: “Esteban Larraín, is a filmmaker and founding member of Escenix, and personally deals with these aspects that are relevant and that make the difference in a website that offers its archive materials. I hope the difference is understood.  We are the Netflix of the performing arts, that’s where we aim to be”.

What is the contribution of streaming platforms during this quarantine?

“Unbelievable how the pandemic made cultural centres active and find ways to accompany their audiences online. I think that without art the quarantined world would be hell. This quarantine accompanied by art and culture delivered online, or whatever, makes the difference between horror and reflection. Between barbarism and civilization” says Rivadeneira.

Regarding the closure of the Municipal Theater by the quarantine, Carmen Gloria Larenas, general director of the country’s main stage, said that “since last Saturday, we took the decision to suspend all activities in the main hall, which included opera, ballet and concerts, also the Arrau hall and guided tours. This is to contribute in the best possible way to avoid spreading the virus, both among our workers and among the public that could eventually attend these shows”. 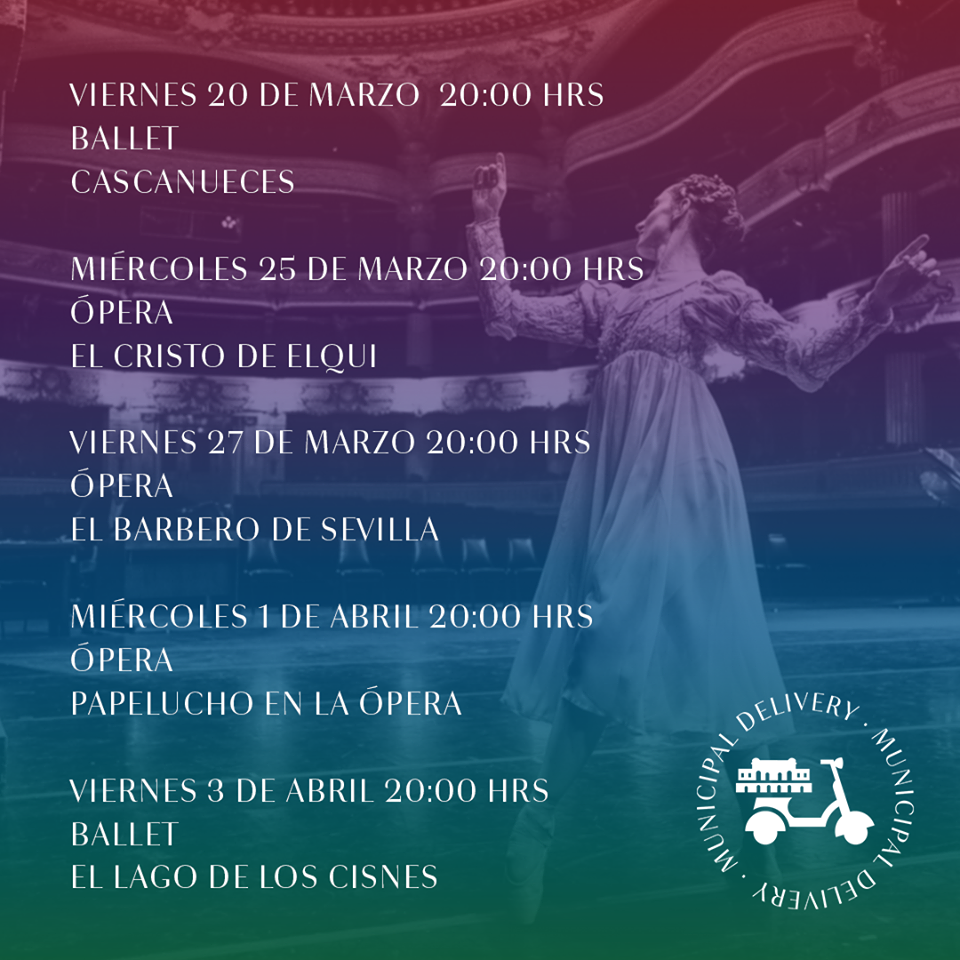 Each of the scheduled performances has a day and time of release, but can be viewed at any time during the week following the release. The first show is scheduled for this Friday 20th and is The Nutcracker, starting at 8pm. The programmed performances include: the ballets The Nutcracker and Swan Lake and the operas The Christ of Elqui, The Barber of Seville and Papelucho in the opera. The titles will be premiered on Friday and Wednesday at 8:00 pm. Larenas says “Today our concern is to keep the theatre alive, because we are a living theatre and, in spite of this quarantine, we have prepared a digital season that we have named Municipal Delivery, and which will have as its main objective to share, free of charge, with complete families, both ballet and opera productions and Small Municipal”.

What other ways are you prepared for this quarantine?

“We will also have activities on the digital platform so that children can learn, for example, to make origami swans and we will have a section, which will feed our own artists, with music recommendations, books. There will also be small interactive videos with a lot of humor, with a lot of energy, with quality. We sincerely believe that culture is now a factor that brings people together and connects them, we are going to take advantage of all the technological possibilities that allow us to be in contact with our audience and also, perhaps, with an audience that could not come before”, says the general director of the Municipal Theatre.

Well known is Ondamedia.cl website where you can find audiovisual productions from Chile and the continent, which has a catalog of over 1500 pieces between short and feature films, as well as documentaries and conferences on science and humanities. The site used to operate with 8 free “tickets” per month, but given the quarantine that was decreed in the country, the platform has been extended to include all the virtual functions that users want to attend. They can find movies like A Fantastic Woman, Ema or The Wolf House.

With these three streaming options, #stayathome and let’s stop the coronavirus with culture and entertainment.

Opera | Faust: this is how the soul corrupted ones suffer