Mis días sin Victoria (my days without victory in Spanish), the Argentinian play performed in the context of StgoOff, the Chilean Festival of Performing Arts and music, it is a visual and sensorial experience, which from the discomfort it approximates us to the nature of human body and lovelessness. During 90 its director and main character, Rodrigo Arena, along with Micaela Ghioldi, who plays the role of Victoria, she is called by her real name during the play though, tour through a passionate night between them, when Rodrigo -right now a trans man- was a lesbian woman still and Victoria a dancer woman with a heterosexual boyfriend.

A musical introduction makes the audience happy and confident, and ends up chanting the classics that a fictional band sings for the characters who are still in love: “And so the days go by / And I despair / And you, you answer / Maybe, maybe, maybe”. They hold hands, their bodies get closer and closer as the song comes to an end, and at that last moment they kiss. Rodrigo’s monologue begins while an accusing light, similar to that of an interrogation, points directly at Micaela’s serious, rude and disinterested face. After a few minutes he begins: “My days without Victoria is a diary about a aply I never did, about a story I wrote. In April 2014 I met Victoria…” 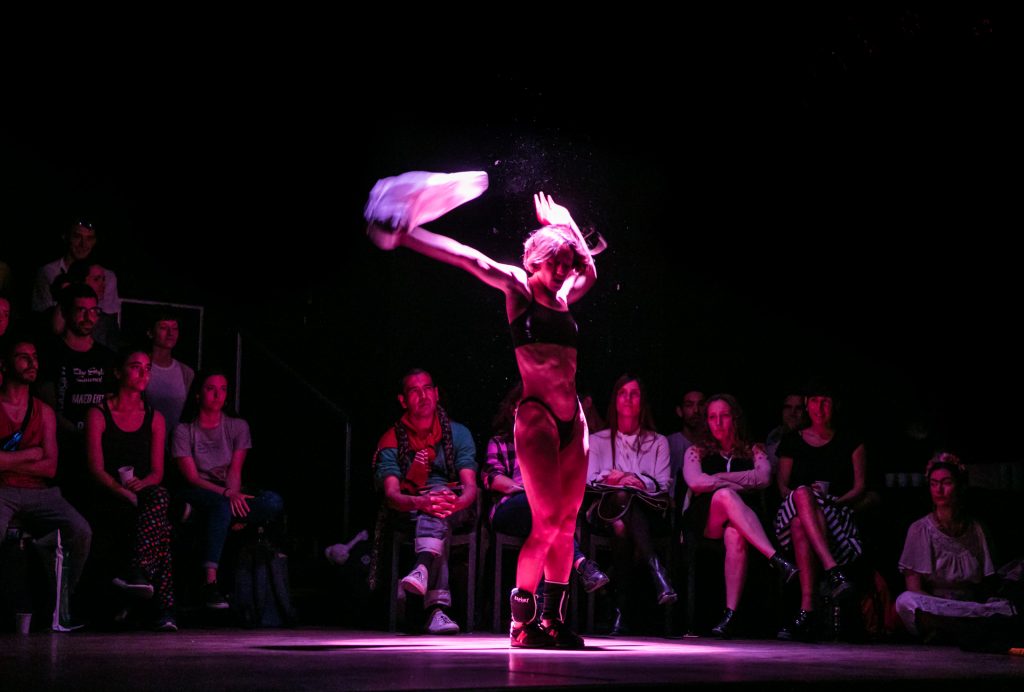 48 straight hours of fiction, lots of wine and Soda Stereo band triggered the passion. The raw soliloquy ends with a harsh order: “Micaela please, do the dance that Victoria did that night”, sounds Monday morning and Micaela dances until she is left in her underwear, thin, with a toned body that is about to show what she is physically capable of.

They’re changing the lights. Classical music. Both in tutus. Rodrigo tells a poem. The demands of ballet are compared to military training. Submission, humiliation and discipline. The absolute distance between dance and art is emphasized based on a difference: art forgives what dance judges. 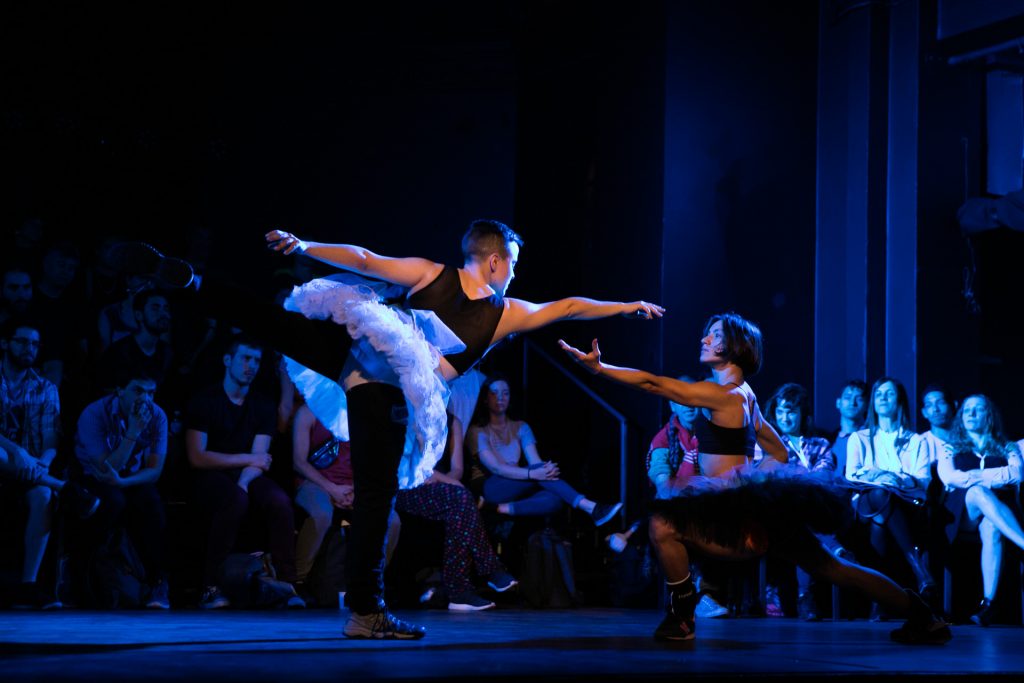 It was necessary for Rodrigo to clarify that there was consent for the movements, or rather blows, that the public was witnessing. And Micaela’s physical skills were observed on stage, she jumped, doing pirouettes, and fell like a potato sack, to the ground, again and again, she didn’t stop, she only increased the difficulty of the acrobatics as Rodrigo asked her to. He spoke of death and love, but the impact of the body against the ground and his perseverance – which could be interpreted as masochistic – distracted from the words through the microphone.

People, aren’t they? In love with romantic love, lovers of pain, they do not avoid suffering, but rather perfect their technique in the face of drama, preparing themselves for the next fall by knowing, and wanting it not to be the last. 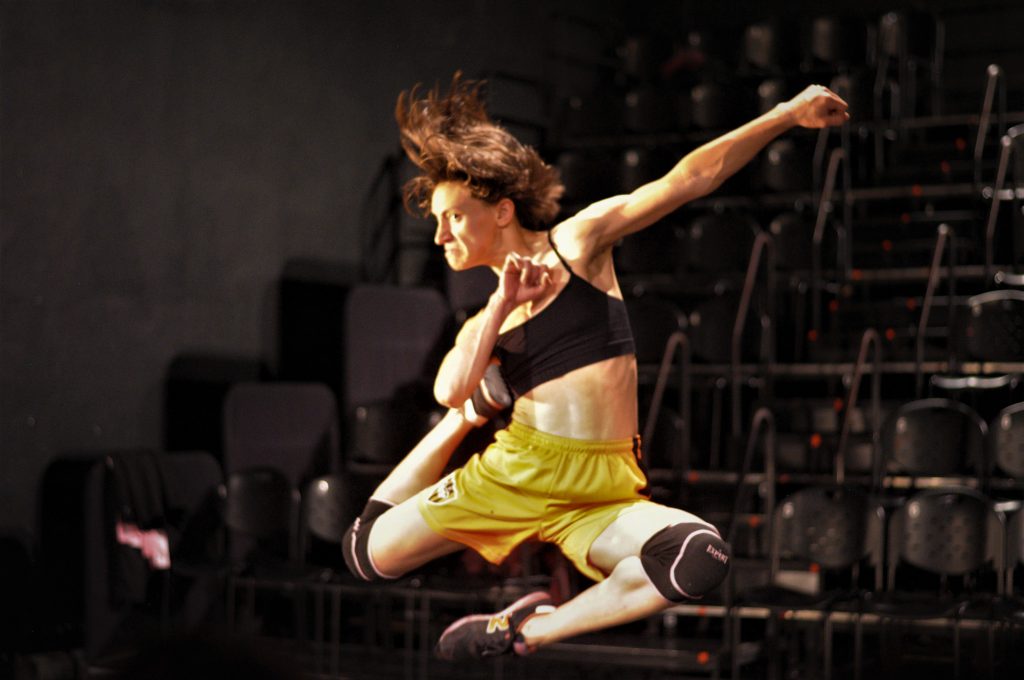 Rarely do words stop, one of those was when Rodrigo shed his clothes displaying his confinement: his woman’s body. He is bathed in red paint that later functions as a lubricant for the modern dance sequence based on the Graham technique, The Fall of the Heart, while Lady in Red sounds. It reads touching, it’s actually kind of ironic. The contractions and clapping do not begin without an invitation to the audience for those who want to live that expression of art, freedom and of course, nudity. How many thought of participating until they heard the word “nude”? Four more bodies appear on stage, all of them bathed in red, crawling and rising again and again. The body no longer produces morbidity or shame, it is a resource of the story like the lights or the musical selection, in which, by the way, there is Anglo rock from the 80s and some more recent cumbia rhythms. Maybe that’s why the lights take on so much personality: the red light has never had such intensity. 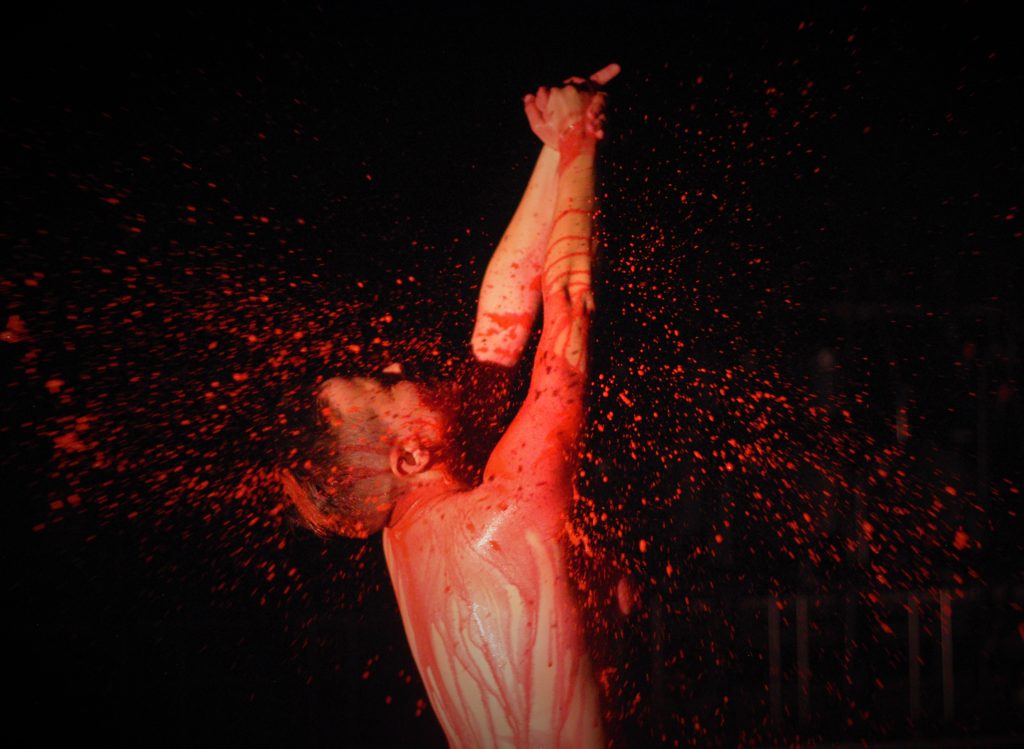 In black, tight and thin fabrics Rodrigo returns from the break with a new theme: His hatred for self-proclaimed contemporary artists, accompanied by a bit of sarcasm. Scenes like these complete a work that says more than it shows, although it’s hard to believe, not for nothing was its director awarded the Best Director prize by The Biennial of Young Art, to assist the Director’s Lab at Lincoln Center, New York. Frida Kahlo is also part of the story, and in reality each character, highlighting Micaela’s acting work, makes sense, just as each word Rodrigo says, which although it causes laughter, blushing and impact, fulfills its objective: to touch on themes such as suicide, fatness, sexual dissidence and lack of love.