“To see a World in a Grain of Sand And a Heaven in a Wild Flower, Hold Infinity in the palm of your hand And Eternity in an hour” (William Blake).

I recall a “hiding place”, which was not hid at all, but effectively makes me find shelter in the vastness of what is minute, when I walked into the garden, with a magnifying glass, just like an explorer would open that dimensional window to enter into a world where the daily rush wouldn’t prevent that my childhood were accompanied with these marvelous universes, which inevitably I recalled when I traversed Microinfinito by Philip Klawitter (1985), an installation that is exhibited at Sala de Arte CCU, in the context of the 14th Biennial of Media Arts: The fourth world, and visually registers life in the microworld, creating a reflecting space about what we don’t see, but it’s there. 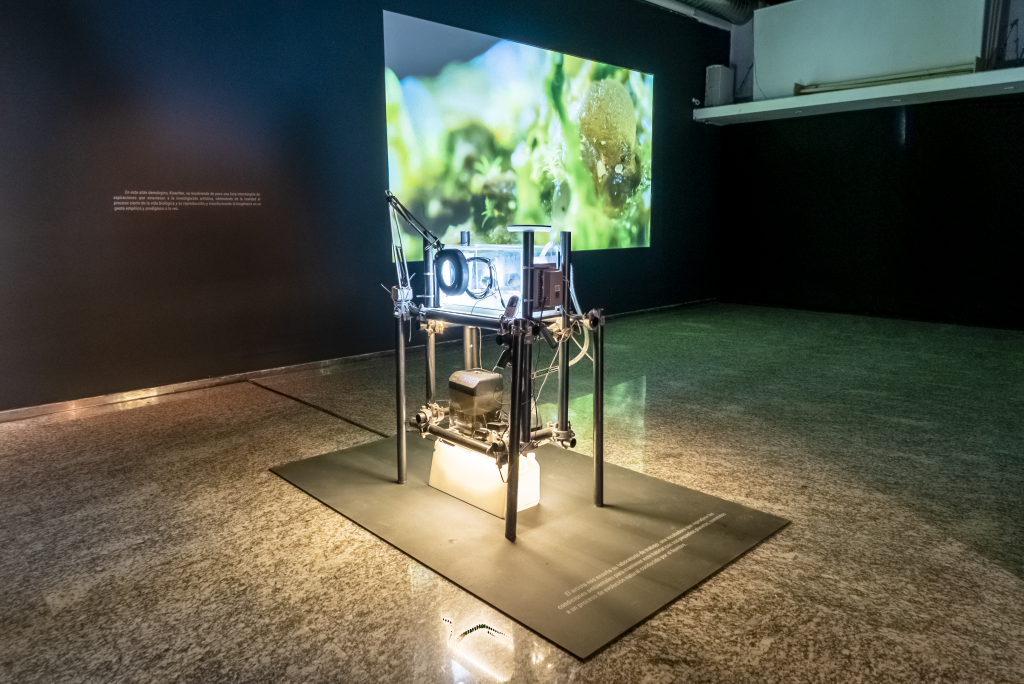 Questioning the dynamics of life – on scales – that the senses are unable to perceive is undoubtedly one of the mysteries that this author unveils when combining biotechnology, engineering, architecture and art, to build living sculptural machines, in an attempt to examine and make visible structures that are indispensable and that in themselves form a unique sensory atmosphere, where the visitor recomposes his internal scale and dimensions a parallel universe, which he does not know completely, but which he discovers in its real magnitude from three large axes or installations, composed in the first instance by the micro plant incubators: Panspermia and Biogenesis, where we try to “reproduce the origin” from basic life traits, that is, through mosses, fungi and tiny organisms that emerge in the form of organized cells. Understanding the cell as the minimum unit of independent life.

Tiny manifestations, impregnate these microhabitats with movement and vitality, which give an account of the spontaneity of the molecular processes; from inoculation, understood as a way of grafting information into the environment, to the emergence of other microorganisms and interconnected life systems, which in turn evoke the biggest in the smallest, referring to the hermeneutic principle of “as above so below; as below so above”. A reversibility that also recreates the fractal quality of the universe, by homologating in an analogous way the cosmos, making the smallest thing similar to the astronomical in a game of perpetual imaginaries. 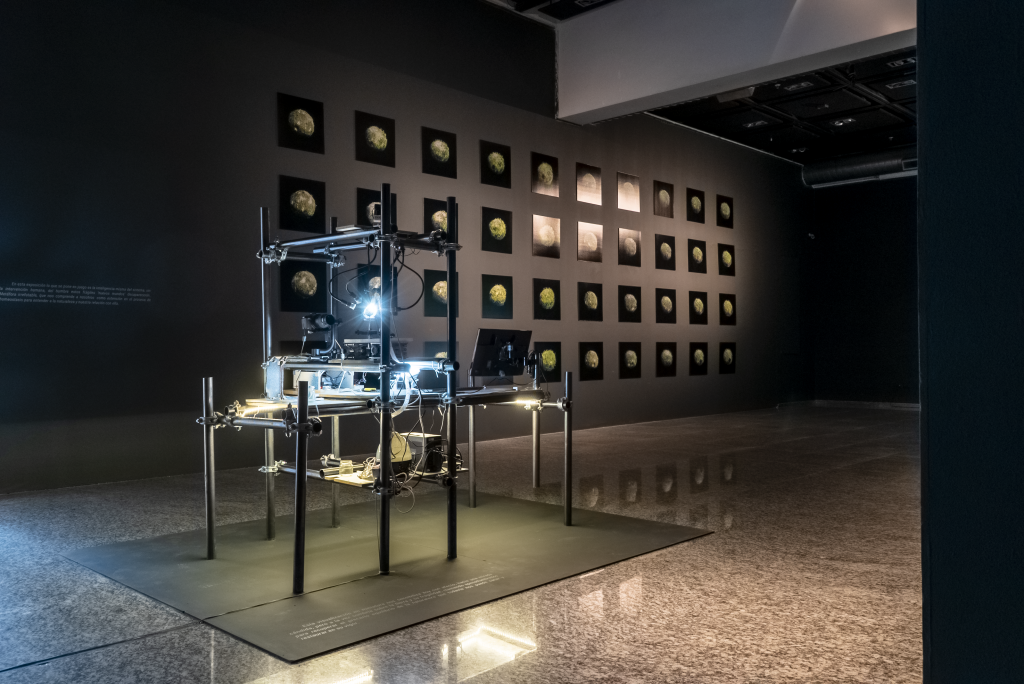 To complete the painting with Microinfinity, he proposes a visual record of 40 images that Philip Klawitter captured over 147 days, where the visitor, going from the micro to the macro, notes “the path of existence”, through a passage that underlines the need to reflect on the passage of time and its effects on all the organisms that make up this micro-macro universe, which, as Arturo Duclos, its curator, points out, “What we assume here is not only the atlas of a new world, created on a micro-scale by the artist. It is the metaphor of the postmodern Faust anchored in the utopias of the 21st century”.

Thus, Microinfinito, in addition to the acute biological, philosophical and even holistic analysis, proposes a penetrating examination of the “non-visible” worlds, broadening the perceptive spectrum, zooming in on the origin, and very especially on how nature, in imposing its terms, confronts us with constant change. For this reason, even though this is a work in progress project, it should be seen as a significant contribution that in itself helps us to understand, through “awareness”, the multidisciplinary character that art possesses, since it is as mutable and infinite as these universes where the dominant aspect is precisely its most characteristic feature: change, which to the surprise of many, operates from the simplest to the most complex beings as an inescapable capacity, as proposed by anthropologist Patricia May –
“Just as the tree moves through spring, summer, autumn, winter to return to spring, so all transformation is cyclical at any level”. 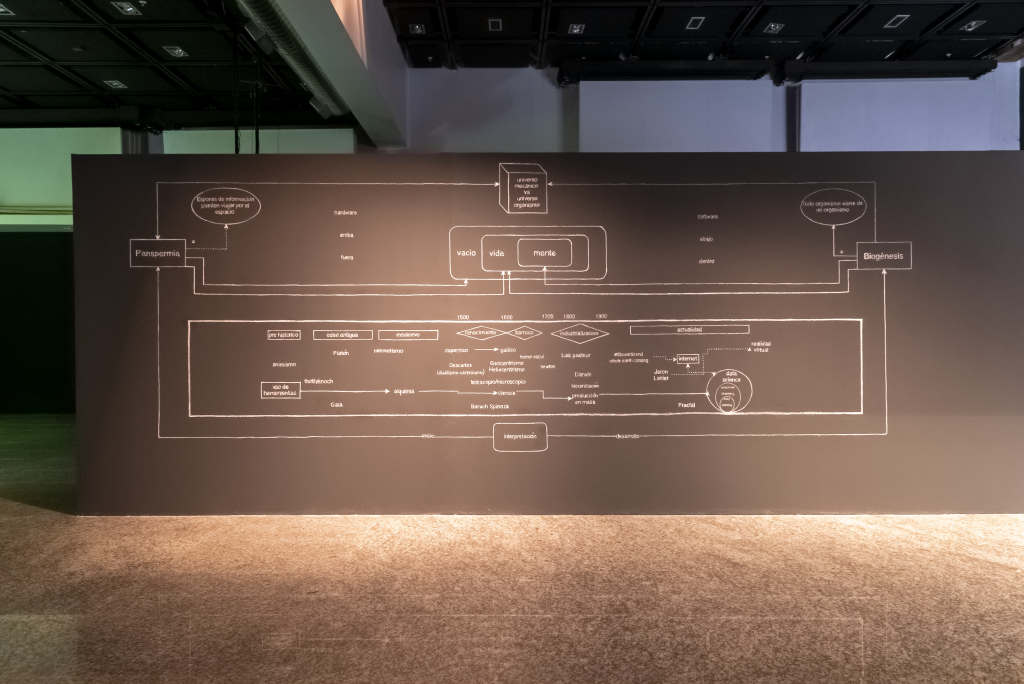 In short, that evident contrast contained in this primordial abyss that is life, is present in Microinfinito, where above allegorization and the consequent introspection, it indicates to us the modes of relationship that living beings have with their environment, and how each form of life, however small, possesses a simile, which manifests itself through this ambivalent reflex, and which stands out precisely because it metamorphoses into this counterpoint with the cosmos and the conformation of these microplanets, which are nothing more than the verification of the minuscule in the immense. One immersed in the other and vice versa.