It is like entering into a friend’s apartament, ring the dorbell, somebody opens the door and in no time, before you, pieces make you part of the space. They are not in order either disordered, they only do not comply the formalities, but with a purpose. Anyone is welcome to watch, interpret, be part of the discussion. The pieces seems to be ordered by color, but not that much. All of the rooms are occupied, even the office and the bathroom, because houses are like that, no place for unsightly, no private place, all is open to shelter and protect the feelings that this exhibition brings.

130 artists responded to the call from Isabel Croxatto Gallery. They had to send only one work, one that they felt corresponded to the theme, to what is happening today, to what has been happening since that October 18. But the date of creation of each work is not limited to that eternal October, and although some works were created for the exhibition, others some years ago. It is when the skin is bristling, when the motto “it’s not 30 pesos, it’s 30 years” becomes palpable, and there is no doubt that art is often premonitory, or rather, does not keep silent. 34 artists were selected by Isabel Croxatto along with Elisa Massardo, journalist and editor of Arte Al Límite, and José Manuel Díaz, a Chilean collector. They did not read names, they did not know stories, the selection was made only by observing each work. 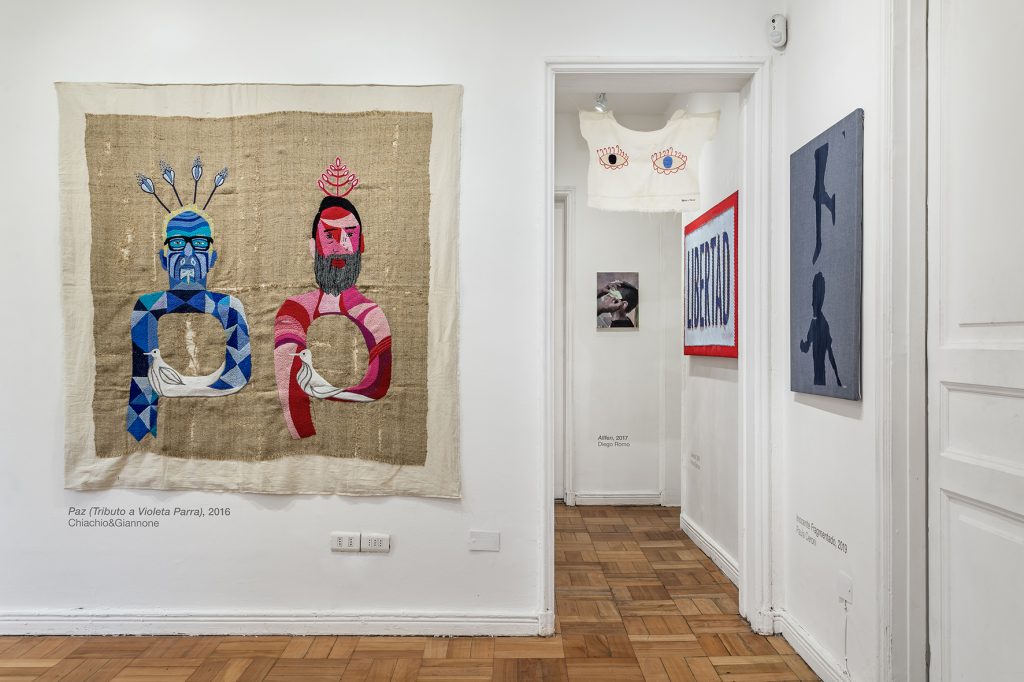 The view is almost immediately directed to the colour and texture of Chiachio&Giannone‘s “Paz (a tribute to Violeta Parra)”, the couple of painters who exchange their brushes and oils for needles and threads, a thousand-year-old technique, a political action. Like this work we also find “Los valles del paraíso” by Loreto Carmona, who embroidered on a sack of potatoes reflects on the rural, the mestizo, the village. Fabrics and more fabrics, threads and more threads: “Libertad” by Andrea Barros, “Inocente fragmentado” by Paula Ceroni and (Escudo) by Paloma Castillo. Ludic, a language that belongs to the traditional and that, as a resource in contemporary art, gives friendly forms, cheerful colors and a feeling of belonging that manages to connect in a unique way the appreciation for the details with the rescue of the ancestral.

How many have fallen with a mutilated eye? “19.10.19” by Valentina Bravo, in a symbolic way, brings to mind the despair of the first days, the disenchantment for a homeland that is not able to sustain us. The painting is heartbreaking, in the same way but even more literal “Descenso” by Christel Vega. The wrinkles, shadows and glitter, the movement of the damaged and blood-soaked hand make it look photographed. Damage, injury, perhaps that is why they share the same room with “Enfermedades Preciosas” by Cecilia Avendaño, which invites us to interpret, through digital post-production, the vermilion paintings on white lace that dress the back of a woman with her face in the dark. In front of her, a man, “Autorretrato” by Héctor León, with his face illuminated but covered by what seems to be a scar, fragments the whole work. 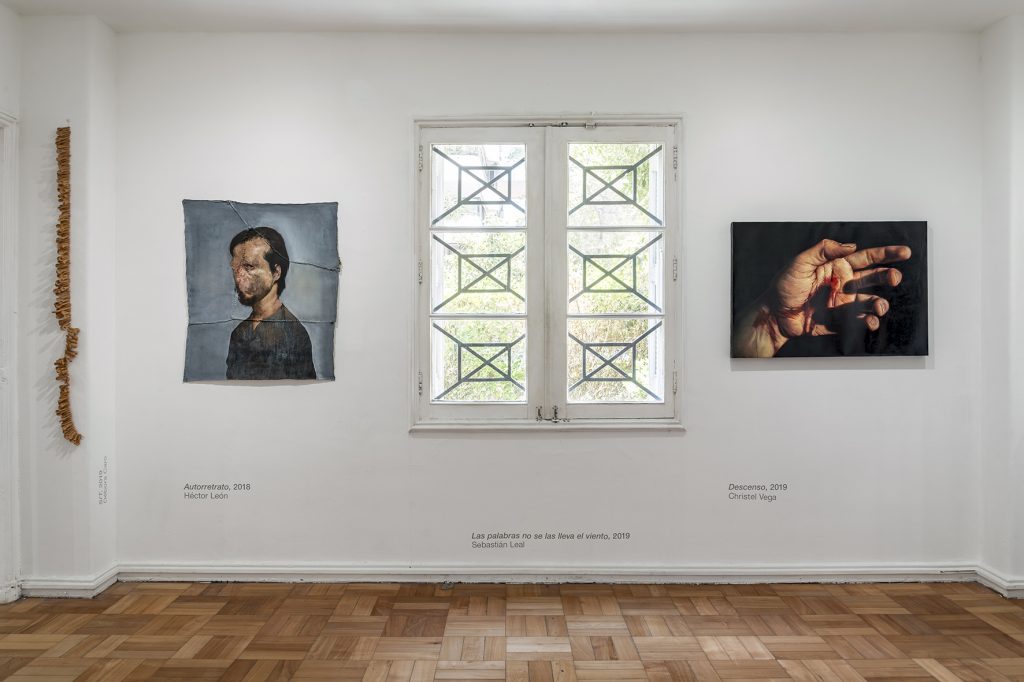 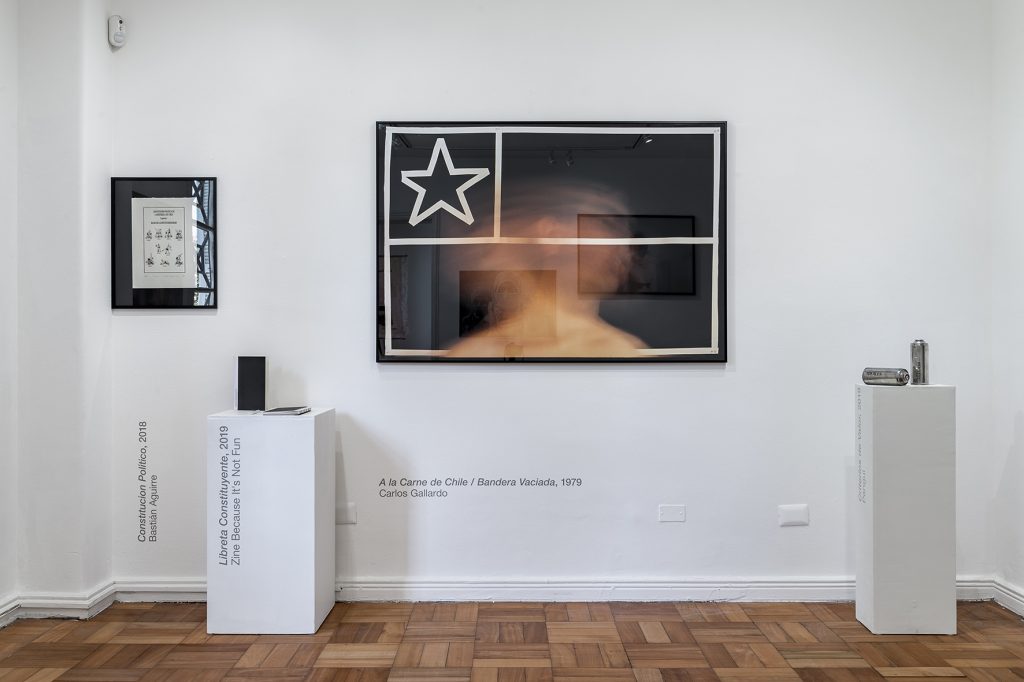 In 1979 Carlos Gallardo created “A la carne de Chile/Bandera vaciada”, popularized -probably without intention- during the last protests, counting on multiple perceptions of its meaning, as much as the amount of stones in front of it. “Words are not carried away by the wind” by Sebastián Leal: blood, fear, impotence, collaboration, support, help. Next to it is “Criteria of Value” by Pangui. Two sprays that seem to be teargas bombs, but it is not necessary to explain the differences between them, as their uses and effects differ as the reason for the force. The value of CLP135,450 corresponds to the compensatory money for people with a mutilated eye. In the same room, the old lady collects flowers. “Tragedy” by Andrea Breinbauer is an oil-painted wooden model. What a pity, that flowers are the only thing available, the only thing, that with care, they are enough. 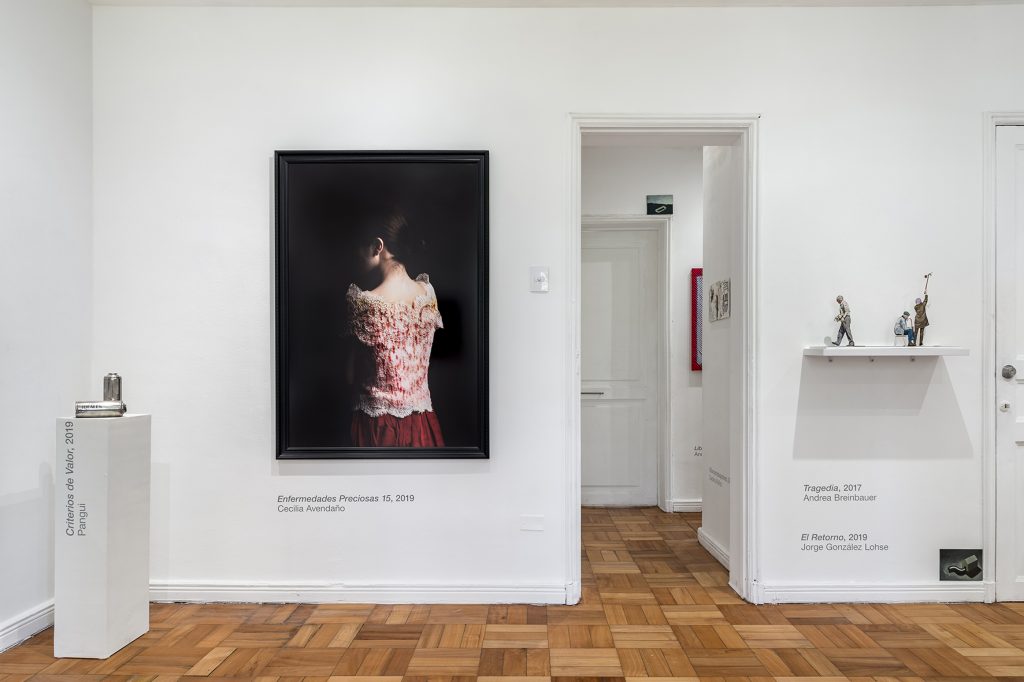 In the next room the environmental emergency is present. In the bathroom, the injustices are accompanied by “Partial view” by Andrés Vial and “Antropología del servicio” by Juvenal Barría. The photos correspond to landscapes of Chile cut out from the well-known educational supplement Icarito. The post-its on them fulfill the function of blocking the view, because anyway, due to the climate crisis and human intervention, the places no longer look like this. Arbitrary, the damage that nature suffered like the limitations imposed on Martuca, the nanny, Juvenal’s alter ego, who after telling the employer about her dream of studying, receives as studies the improvement of her work as an employee. Barría creates around classes, gender, from the intimate to the political, that is why “Pera de Angustia” is also in this exhibition, hiding details in the territorial areas closest to the military regime, where also the huaso, symbol of the patriotic pride, takes shape from the Queer. Because there are those who continue to live in dictatorship. 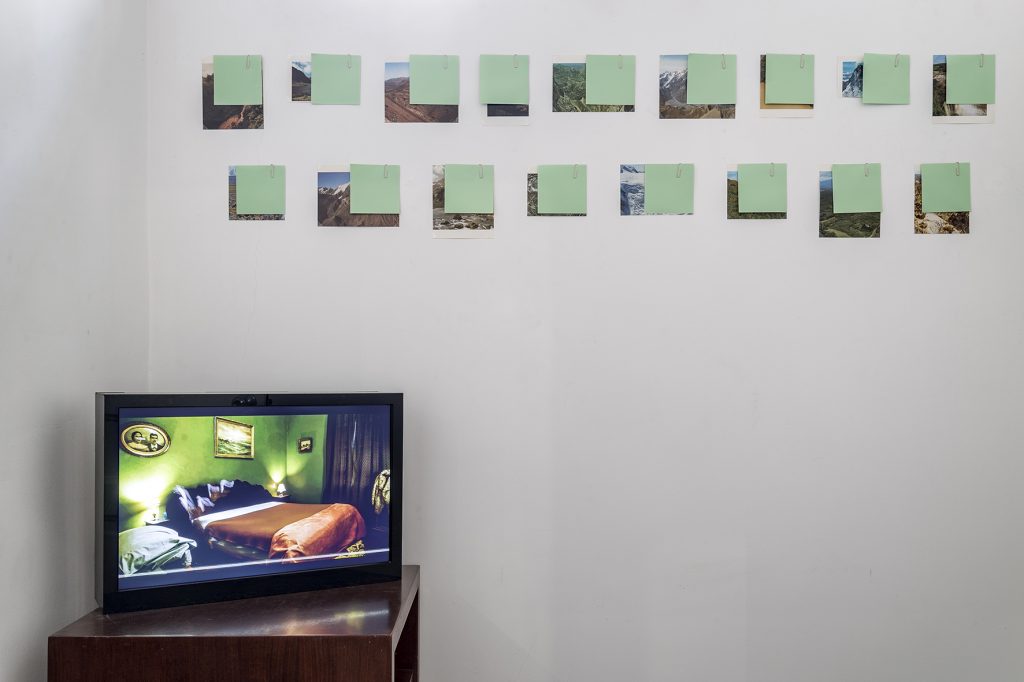 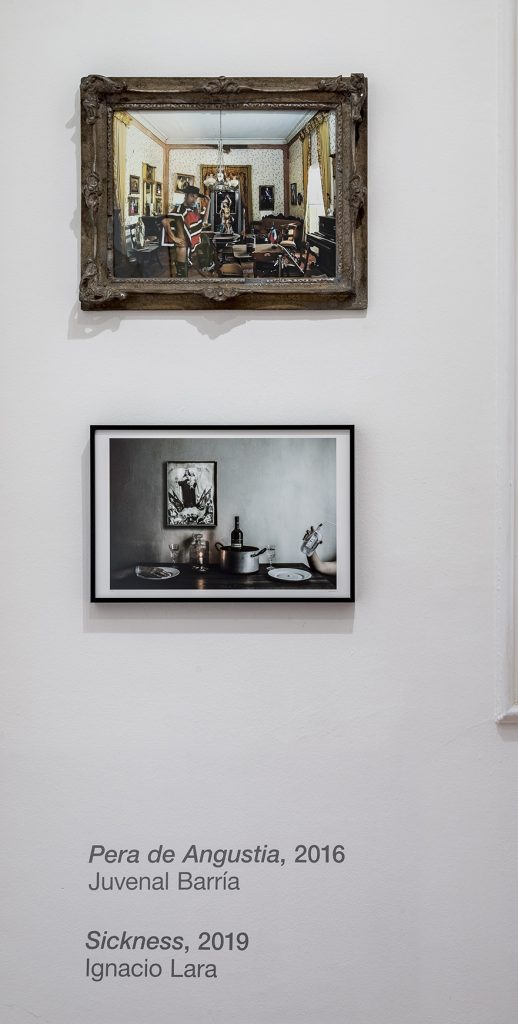 The same technique of the Pera, the photomontage, is used by Ignacio Lara in “Sickness”, where a patriotic and religious picture -because when they have not gone hand in hand- with recognized faces of the national politics, exalted, are confronted with the disease. Sickness drinks, cooks, eats and lives among those who do not fit behind glass, within the framework of supremacy, the privileged.

Returning to the tour, in the office and on the corner, Fernanda Nuñez’s “Fabricated Memory” shows controversial scenarios such as the Sename, a classroom, the office, the subway, the AFPs… the same scenarios that occupy space on banners and chants during demonstrations, but it is preferable to delve into the chosen positions as a possible trigger, a domino subject to the interpretation of those who observe it. Next, another scene, “Territorial Assembly” by Johans Peñaloza, destruction and defense, the controversial barricade in colors that make it look negative. So its natural state is… positive? Just a play on words, without the intention of shocking those who believe in the other way. On your right, a girl hugs a boy while pointing out the storm. Do you recognize her nose? Victor Castillo‘s caricatured paintings become part of The world in no time like the children of the national scene. His title, “Here comes the storm,” does justice to the idea that the little spectators will be, when it comes, part of the storm.

Records of reality, “The four faces of Dignity” by Cristian Velasco and “New Normal” by Carlo Maccheroni, are works that, having captured moments, leave the truth in front of our eyes. A square taken by the police. A lady with her face covered to buy eggs. Only a few can imagine the relationship between one and the other, or perhaps there is no relationship at all and they were placed there at random, the dialogue opens up and the exhibition fulfils its function of being a blank piece of paper ready for the pencil to draw interpretations. 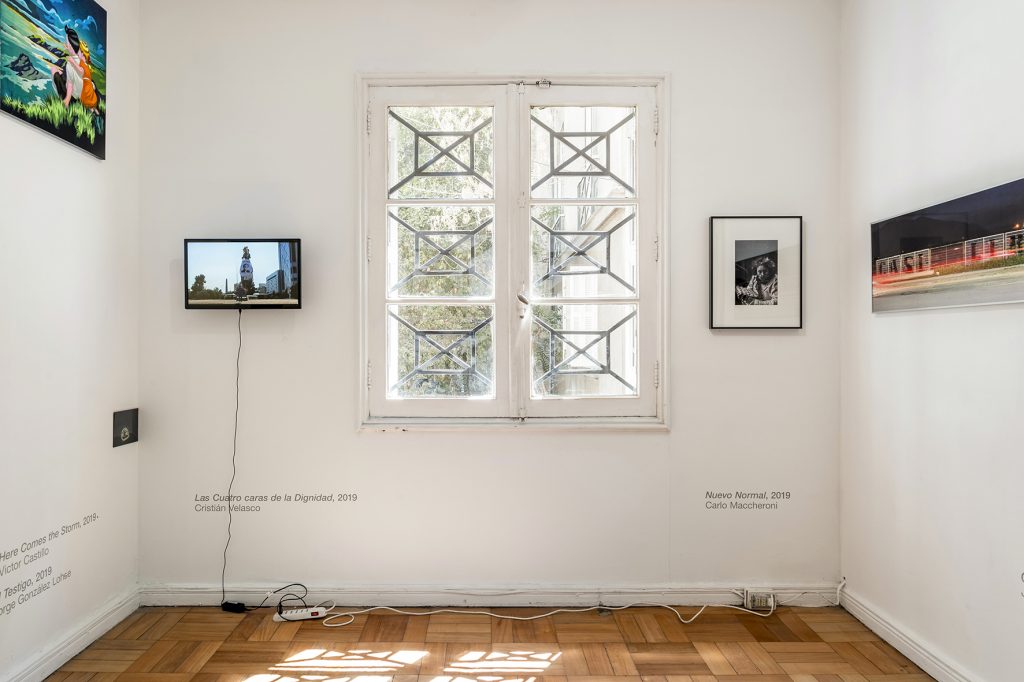 The bars of “Almost Free” were cut by the same artist, Jonathan Ramirez. The work is self-explanatory. Behind that wall, video performance by Germán Tagle, held in 2016 at Matucana 100. This is the first time that the video is presented in Chile, showing the interaction of the audience with Germán’s work, evokes one of the rawest performances of recent times, by Marina Abramovic, “Rhythm O”. There is something in the human being, that if freed, becomes impulsively and shamelessly attached – perhaps thanks to anonymity – to hate and the unusual extreme of aversion.

Many works have been left out of this chronicle, many ideas and correlations, many pieces of the puzzle El Mundo Al Instante by the Isabel Croxatto gallery; the decision to limit has no other intention than to invite the reader to go, to feel what he sees, to search in the depths of his memory for his own connections and interpretations, and to criticise them, because if there is anything this exhibition achieves it is self-criticism in the face of a reality that is no longer silent. The artists freeze time with their threads, brushes and cameras. Where do we decide to be while this happens?