“Learn without arrogance and let yourself be overwhelmed over and over by the astonishment, which is what moisturizes the brain and soul” -Cristian Cambronero

Creations filled with color and turn into something wonderful from every point of view. Like a building that looks no longer like others due to its visual aspect, improving greatly that space and generates interest in people who see it.

This is how the artist from Quito, Roberto Rivadeneira, is managing to amaze many people in the world with his art. Roberto, who is also known by his artistic name URKU, which means mountain in Quichua and which he chose when he started painting in the streets, because he did not want to use his real name. That is how his research for the words of native Ecuadorian people, led him to find that the word Urku identified him very well. 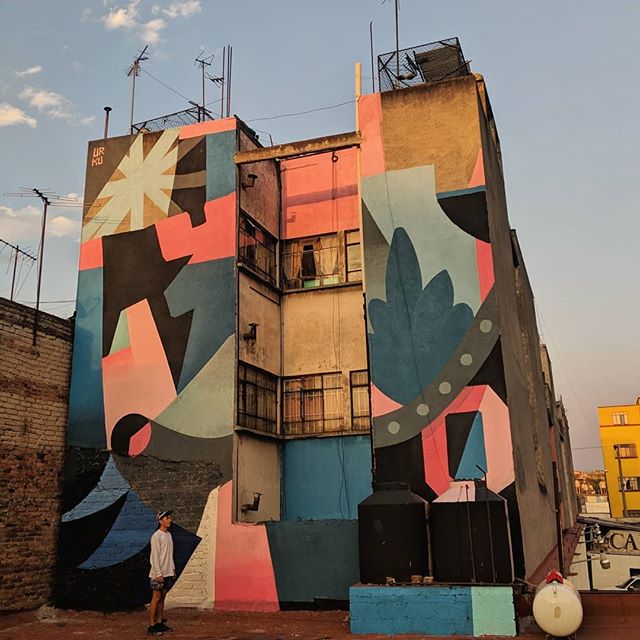 Defining his style as semi-abstract contemporary art, which varies and adapts to different media such as canvas, paper, murals and objects. His work is deeply influenced by 20th century painters, contemporary culture and everyday observations between cities and societies; an open invitation for viewers to adapt and interact within space and atmosphere.

The artist, currently living in Berlin, expresses that his taste for art has always been with him, but it was at the age of 20 when he had the opportunity to work on a project with an Australian painter, that he realized his passion. Roberto was studying design and communication in Sydney, Australia. “Those days in his studio really spoke to me and I realized that what I wanted to do was paint; and well, from there I haven’t stopped.”

Roberto is a painter, illustrator and visual artist, who has also developed in recent years as a muralist. His interest in street art has accompanied him since he was a child. His beginnings were at the age of 14 or 15 when, together with his friends, he began to make stencil and graffiti, showing that at that time he was not very good, but step by step that little interest in the process between art and society grew.

The murals of URKU can become so impressive in size and style. It is impossible not to admire some of his works that are in countries like Ecuador, Chile, Brazil, Mexico, Spain, Portugal, Serbia, Germany, Austria, Turkey, Greece, Bulgaria, Cyprus, Israel and Australia.

The messages in his works are not very clear and punctual, because he seeks to generate a visual aesthetic through colors and composition, thus capturing people’s attention; without the need for something clear to be perceived, there being that open interpretation.

At the end of 2015 Roberto traveled to Germany (Berlin) to work as a designer, after three and a half years of full time work he decided to leave it and devote himself completely to art, which was a great challenge for him, but so far he has achieved a very prosperous result.

Roberto says that he is very lucky to live in Berlin; to be a spectator and to be able to absorb that artistic scene that is everywhere. The exhibitions, the performances and the parties every day and on every corner. “Unlike the contemporary art and mural scene in Latin America; in Europe and especially Germany abstract painting predominates. So I feel that this has incredibly affected my work and what I seek to produce”

Your inspiration can come from anywhere, from a cup of coffee, an exhibition of archaeological pieces, to the landscapes in front of the mountains. Changing the social and visual context also helps him a lot in his creative process. Roberto takes advantage of the trips he makes for work to absorb new ideas and quickly capture them in his sketchbook. “When I go to do a mural or a painting in the studio, I go back to see my past ideas, I absorb a little bit of my drawings and how I think these compositions can change and adapt to a space”. 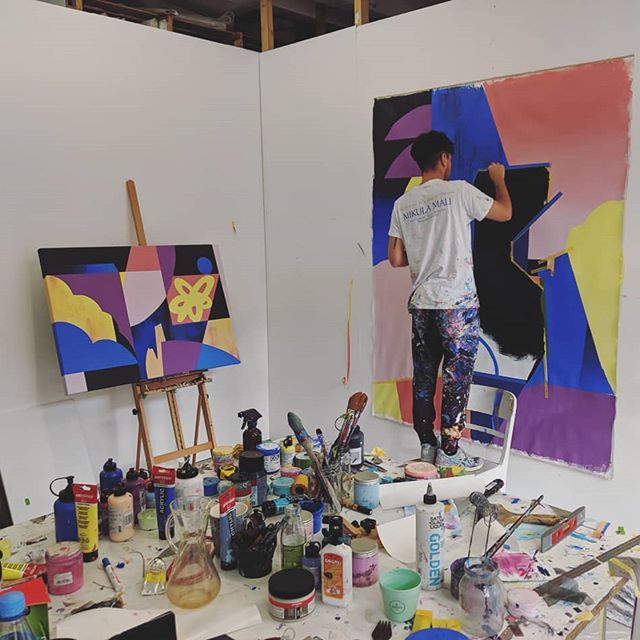 One of the things that URKU enjoys most when painting and making art is the feeling that is generated in him when he is creating something new, either in a mural or in his studio. In that process he feels that he falls more and more in love with life. One of his favorite phrases, with which he feels very identified is: “Art is the greatest form of hope”, by the German painter Gerhard Richter.

Roberto recently held an exhibition called Casi Despierto (Almost Awake), in his hometown Quito, in which he exhibited his perception of real motifs in imaginary spaces.

Casi Despierto refers to the moment between deep sleep and wakefulness; known as the hypnagogic state, which is that transition in which we perceive images and associations between the real world and our dreams. Through paintings and semi-abstract objects the artist made an allegory to the concept of being “Almost Awake”, representing his vision to the constant change of images based on our perception of time and space.

For Roberto this exhibition was a pleasant experience: “It was really very special for me, as it is to give back a little bit of my vision of life and experience and show back in the city where I grew up. It was very emotional to have so many friends and family from a long time ago. On the other hand, the exhibition was very well received and I feel that the public took a special interest in it. “Having a personal exhibition is a big project that requires a lot of work and dedication. For me, this was a specific objective I had for some years”.

And of course his visit also left new murals in the country. “Whenever I come to Ecuador I like to travel a bit, fill the car with paint and try to get spaces in rural areas of Ecuador.” Several of its murals are in Quito, Ballenita, Canoa, Mompiche and Puerto López.

From his point of view as an artist, URKU, he has realized that in Ecuador urban art is growing a lot. He likes to see the process of having several new artists willing to interact in space, he also finds interesting the way in which social acceptance towards urban art has increased, but he is also convinced that there is still a long way to go and to achieve a culturalization in society, so that muralism and contemporary urban art have the positive impact that each artist wants to leave.

For the moment, the artist from Quito wants to continue promoting his career with new projects; with bigger murals, with more extensive galleries, generating an aesthetic and visual system. His work will be marked in the future, no matter where he is in the world.