The independent editorials have always been the driving force of the fair, literature, illustration, and other diffusible disciplines through books, however this year La Furia del Libro has a new driving force. It is one of the few fairs which kept standing after the social outburst, many places closed, many activities were put back, but this version goes stronger than ever thanks to the new program which is part of the discussion.

We talk with Simón Ergas, editor in La Pollera Ediciones and general producer of La Furia del Libro fair, who will explain the reasons and new guidelines of this 10th version that will be carried out on December 21 and 22 at the Gabriela Mistral cultural center (GAM). One of the changes will be that this year, the party (which used to be for general public) is going to be a quiet event, ony with the space member. For the organizers, to be able to make this fair is their most important celebration.

How was the national event incorporated within the fair and for what purpose? What is the desired contribution?

La Furia has always been a fair focused on emerging literature and poetry. Unlike commercial literature, it has always attracted a bold reader in search of new readings, rather than being driven by marketing. We thought then that this dynamic, this meeting between publishers, authors and readers could be put at the service of what was happening, otherwise there was no point in doing it.

We saw many events being cancelled and that leaves a strange feeling. The first few days I was lame and couldn’t go out to march until one moment I grabbed my crutches, went outside and felt the energy of what was happening. It helps you talk to people and get rid of the confusion a little bit. Being with more people you can experience your thoughts, in that sense, the discussion that can be generated in La Furia can help dispel the confusion, that’s the idea. 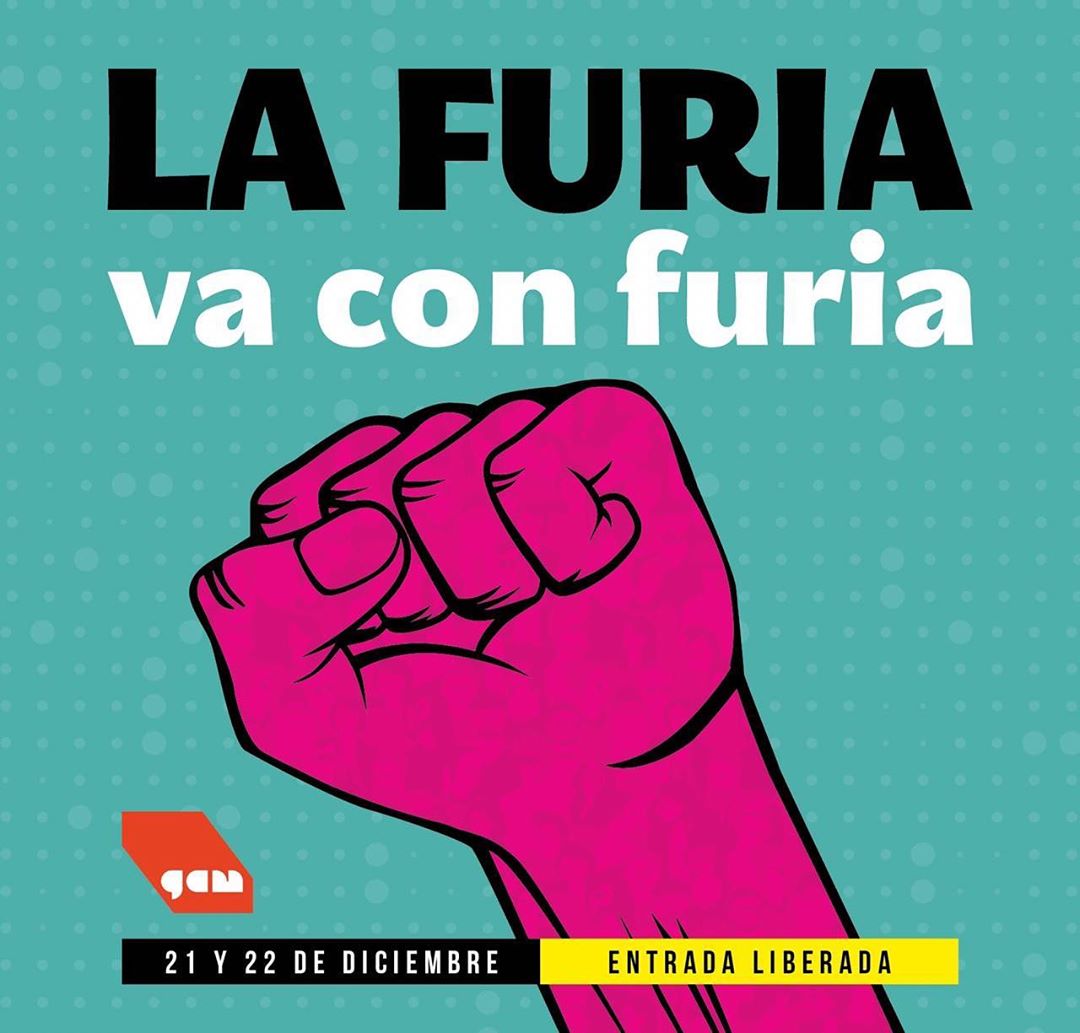 In this respect, and based on the note you wrote “Act of Independence: the question of TV”, why is this fair necessary? Do you think it is similar to the new citizen spaces that have been created after the contingency?

That’s why the existence of the town hall is necessary. At the beginning of the protests we celebrated meeting, and that’s why these spaces are needed to share with different people, to spread the ideas we have, especially if we want to build a new country and reflect on how we want to do it.

There are similarities with the Sunday concerts held by the GAM or the Museo de la Memoria, to make it so we discuss two important national events: the protests, which do not have to stop, because the system is paralyzed and allows to question everything. But we also need to promote the other side, the construction of something new, the proposal, and we believe that on this side La Furia can contribute.

Every year there has been a furious reading, on Sundays, the last two hours, like an open microphone for poets. Each one has 2 minutes and you can register by facebook, it is always full and very different poets arrive. It’s very entertaining. We will soon launch the call as the angriest reading ever.

“I started reading Don Quixote looking for something far from reality, but it’s the same, it’s about a guy who wants to be a knight errant at a time when knights no longer exist, that is, the world advanced but his head stayed behind…”

When making the changes in the programming, did you consider interaction from social networks? What will happen with the previous programming?

Yes, we asked what they wanted, that they proposed people and it was very useful for us to put together the new program. The publishers also reacted very quickly and none of them complained because their star book was not going to be released as promised, they tuned in. The previous show died (hahaha) well, that’s where it left off. There are books from the previous program that still fit, but it was entirely reformulated.

What role do books play at a time like this?

Well, I couldn’t read for a month, curiously I started reading Don Quixote looking for something far from reality, but it’s the same, it’s about a guy who wants to be a knight errant at a time when knights no longer exist, that is, the world moved on but his head stayed behind. Every time I describe him, people ask me if I’m talking about Piñera. That’s an example of what classic books can give you.

Before anything else, most of us were already thinking about the demands of the social movement, but I was surprised. I don’t think anyone imagined this outbutst. Suddenly it’s hard, you find a lot of people who want to go back to normal and that doesn’t exist anymore. The books on display at the fair have the grace of being very contemporary. There are classics, of course, a publishing house has a line of patrimonial rescue from where we get unpublished classics, but there are also very young writers publishing and interpreting the current Chile, in fact, I would not be surprised if in many of the books all this had already been stated. 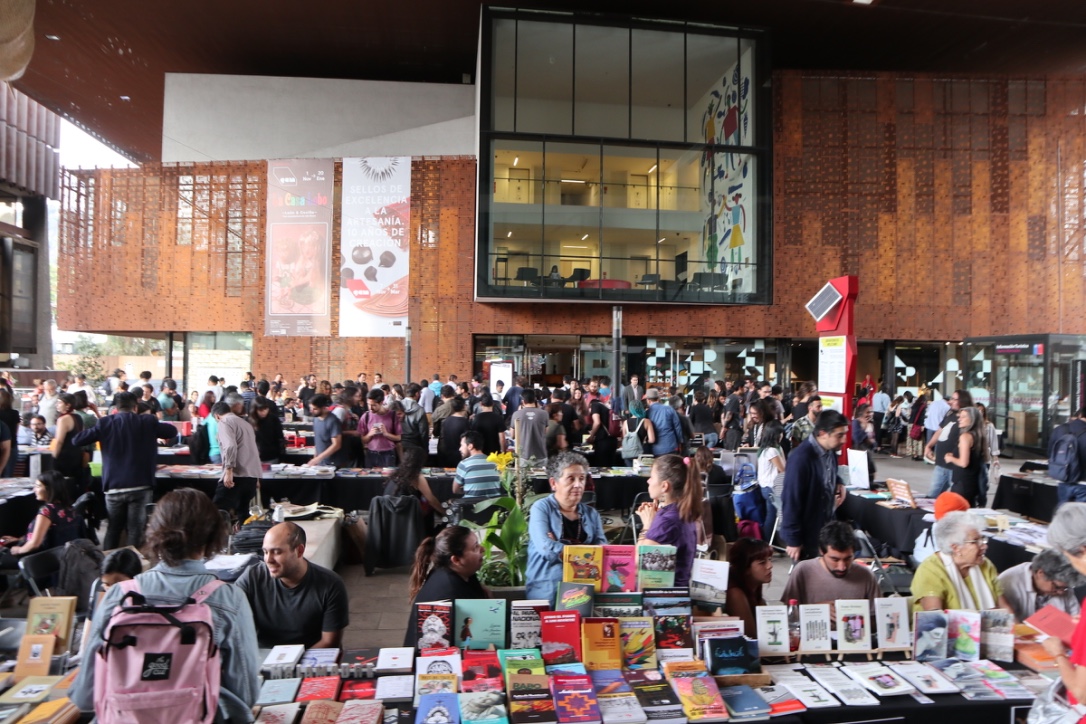 Even though The GAM, through its Twitter account, has reported more than one fire in the Great Hall, it has not been looted like the great commerce and anyway the fair will be held in the place, why and what safeguards will they take?

Everything we see is mediated by commerce, and that makes you feel that nothing is yours. The other day my aunt asked me why we don’t like the Costanera Center, being that it’s our big building, that people love New York and it’s full of buildings. Well, because it’s a mall. No wonder the looting is aimed at banks or pharmacies, but a cultural space is not bad for anyone and belongs to everyone.

The burnt-out part of the GAM is the one that was abandoned two or three years ago. The company that had put out to tender that part went bankrupt and the construction was left behind. The times that it has been burned is because people come in to get materials for barricades. They have not joined the GAM and it has been respected. One side of the fair is for that sector, but we are already working together with the risk preventionists to stay further away, just in case.

We will have an activity directed to the refounding of the emblems of the city and its symbols, the sculptures and the graffiti. Many people say, and they are right, that the city is destroyed or uglier, but it is an appropriation of the city, they are making it theirs. They are spaces that are defined by commerce and now they give it an identity. This is the kind of subject we want to discuss in La Furia and invite the personalities, who have been protagonists in this short time, to contribute with their point of view.

La Furia has always been a fair focused on emerging literature and poetry, unlike commercial literature, it has always attracted a daring reader in search of new readings, rather than being driven by marketing.

Is it convenient to take children to the fair? Will they have a space within the fair?

GAM changed their schedule because they know how the street works, their schedule doesn’t work on Thursday and we were going to cancel on Friday. Saturday and Sunday they are open all day, which tells us that they are confident that it can work. La Furia has always had a children’s space, in a square where the children’s editorials are next to the illustration ones, so as always, Saturday and Sunday before 1:00 pm there will be activities for children.

(be aware/to the web of La Furia for more information)