“It’s not wrong to be pretty,

what is wrong is the obligation to be”

Just like the stars are part of the cosmic illusionism, many of our diseases are result from an imaginary exacerbated by the aesthetical stereotypes transmitted -as a virus- for generations. A pernicious symptomatology which brings a somatization that the visual artist Cecilia Avendaño (Santiago, 1980) make visible through these Enfermedades Preciosas (beautiful diseases in Spanish), which thanks to the collaboration with Isabel Croxatto Gallery, arrives to CCU Art Hall, Andrea Jösch as a curator.

A perennial research project in which Cecilia has also had the support of artists, actors, curators, designers and experts in botany, who for almost five years have contributed to a work in which she tries to demonstrate – through a mixture between classical portraiture and digital post-production – how susceptible we are to contracting more serious and invasive diseases than the pathologies that traditional medicine tries to heal. These, being positioned in our unconscious, are not only kept in a larval state, but are also entrenched as a socio-cultural symptom that conceals an abject reality that in practice is sublimated, but that even so in Precious Diseases is installed from the provocation, once it evidences part of the aesthetic demolition propitiated and processed through the media, which is counterbalanced in the fact of ennobling the figures of its protagonists with a subtle puerility, but dissonant botanical imagery.

This implies a new mode of representation, where the artist reconfigures the identity from discomfort, which generates a breakdown of symmetry and disfiguration of canons idealized for centuries. In this way she manages to give way to a new lineage, created under the influence of an anomaly in which its carriers are liberated from the moment in which the artist uses the disparate as a direct impugnation to a society that entitled and standardizes.

A dodgy look that becomes a language shared by 19 images where it unravels a series of ailments that everyday life conceals. A veil that from its conception incubates an underhand precarization marked by aesthetic barriers and conventionalisms which collapse from an elaborated “meta-narrative”, through the hybridization of vegetable elements that ultimately become an experiential-sensory journey specified by the artist herself: “It is an in-depth reflection on the pathological need to connect with the natural principles that govern our vital principles, and of strangeness in relation to the machinery of concealment that constructs “adequate images” for life in contemporary society”. Added to all these factors is the fact that it truly externalizes that which is hidden and stigmatized. 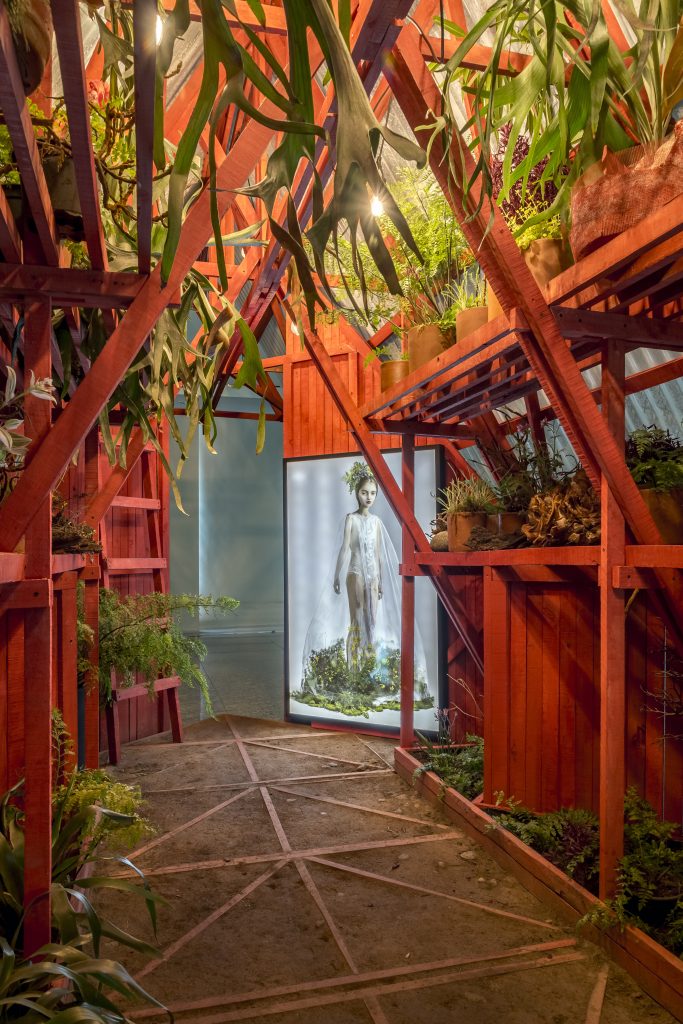 Although it is also a return to the origin, as much to the primordial of our roots with the botany, as in the fact to turn the look to our own nature and to accept what we are with our surroundings. In contrast to that, it also amalgamates that other less kind face linked to an artificial ritual that Avendaño masterfully contrasts with the insertion of that plant bud that progressively takes hold of each muse that inspires this aesthetic introspection with which it reveals this secret drive in which the residual and the playful come together, as basal components of a project that -obvious to photographic intervention- is driven by memory, of whom it also reconciles with the atavistic, creating its own codes and transforming them into a germ capable of disrupting the patterns of beauty with its proposal. To this he adds other models that are not accepted and channeled, not from the ornament -as it seems- but from the meticulous exploration of those who auscultate to the exhaustion of a theme full of ambivalences, where the whole scale of value with which it is expressed is challenged and manifested.

It is key to understand then that in Precious Diseases, the artist, beyond opposing the banalization of beauty, emits an alert signal with which she seeks to become part of the discussion, by proposing a model of representation that privileges an image not consensual, but created between pruritus and charm.