“A painting is not an image of an

experience; it is an experience”

The avant-grade artistic currents that changed the European visual arts entered into Latin America as part of a strong renewal current; however, these movements didn’t enter as homogeneous styles, they were adapted innovatively and personally by individual artists who devoted their efforts to the creation of particularly American shapes of Modernism, as it is the case of Lucio Fontana (1899-1968).

Argentine sculptor and painter, born in Rosario, Santa Fe and trained in Italy where he spent most of his life. His artistic evolution is considerably prolific, since he successfully ventured into some of the artistic manifestations of that time. In 1934 he joined the Abstraction-Création group in Paris. In 1939 he returned to Argentina, abandoned abstraction and began to devote himself to figurative sculpture with an expressionist tendency. In 1946 he founded, in his country, the Altamira Academy and unveiled the White Manifesto. This programmatic thesis would be the prelude to what would later result in Space Movement; and it is precisely this artistic proposition, which has enshrined it in the conglomerate contemporary universe of contemporary art.

In 1949 he made the first buchi (perforated canvases) and then developed the Concetti spaziali series, in which through perforations and incisions of the canvas, he exposed the contemplation of space, and this on the surface, in an immediate and completely opposite way to everything illusory effect. From then on, his work will be marked by this distinctive seal, which sustains “the need to integrate all physical elements (color, sound, movement and space) into an ideal and material unit.” [1] Most of its fabrics are monochrome and refined dyes, rhythmically torn with a safe and elegant gesture with the idea of ​​suggesting an endless space behind the canvas.

Spatialism is framed within informalism and, to some extent, can be considered as a variant of material painting. This manifestation is characterized by the search for a free art of all formal or objective content. Fontana postulated a “free art of all aesthetic artifice”, which led him to investigate the spatial possibilities of painting; For this, he created spatial effects through the material discontinuity of the canvas: the space is defined by a series of fissures, cuts or holes rhythmically printed on the surface of the work, usually monochromatic. In this way the canvas connects with the surrounding real space that bursts into the context of the painting. Spatialism announces the easel painting crisis and validates the entrance of the third dimension, through holes and cuts.

To achieve a radical transformation in the artistic field, according to the Manifesto of this manifestation:

A change in essence and form. The overcoming of painting, sculpture, poetry and music is required. A major art is necessary according to the demands of the new spirit. Matter, color and sound in motion are phenomena whose simultaneous development integrates the new art. [2]

Fontana plastically expresses these ideas with his famous tagli nella tela (cuts in the cloth) and his buchi (holes in the cloth). In both series there is a common factor: chromatism. The fabrics are painted a single color, spread evenly throughout the surface. The canvases are tensioned to the maximum and arranged on the frame. At that time the artist hits a punch or knife on the surface and gets the holes.

These indentations – which in their time attracted attention for their novelty and their apparent absurdity – are, at the same time, signs capable of fixing the line of the drawing, the compositional footprint, with the same precision and the same improvisation character of the brushstroke. 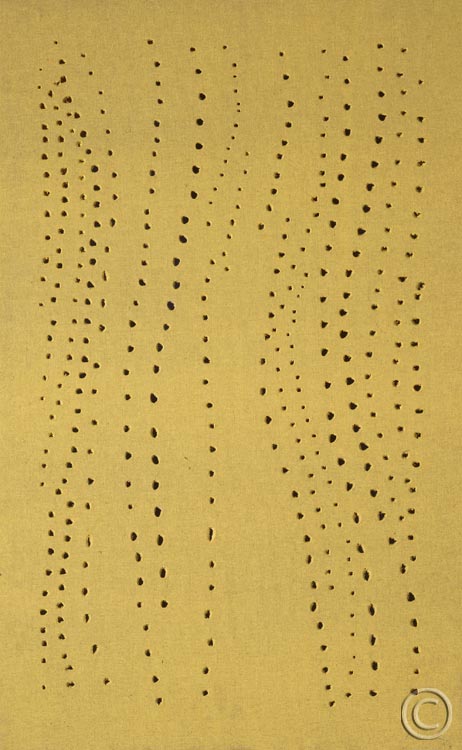 These spatialist works allow the viewer to approach the concept of the unlimited. These brands, which constitute the artist’s gesture, manifest his permanent search for the definition of space. The constant lacerations interrupt the two-dimensional spatiality of the fabric: breaking its continuity ends the idea that it had and has the painting, that of an illusory surface capable of harboring a fictional representation. The originality and value of his work are centralized in the discovery of that other space within the pictorial plane:

My art is completely devoted to this purity, to this philosophy of nothingness, which is not a nothing of destruction, but a nothing of creation, do you understand? And the cut, really, really, the hole, the first holes (…) was just one dimension beyond the picture, the freedom to conceive art through any medium, through any form. Art is not painting, sculpture only; art is a creation of man (…) [3]

Mastering space, measuring with the infinite, putting a face to the invisible have been the most heartbreaking obsessions of Lucio Fontana. Considered one of the most innovative temperaments of the modern Latin American world, he came to find a language of spatial integration, which is still spoken, and in which he defends a philosophy of movement and dynamism in space:

The artistic era of colors and paralytic forms comes to an end. Man becomes more and more insensitive to images nailed without a hint of vitality. The old still images do not satisfy the desires of the new man formed in the need for action, in coexistence with mechanics, which imposes a constant dynamism. The aesthetics of the organic movement replaces the exhausted aesthetics of fixed forms. [4]

One of the fundamental mechanisms of contemporary art is the cut (understood in this sense as a reliable break). But there can be no cut without a surface; there can be no creative negativity without some form of positivity. The cut is the radical opening, the matrix of everything possible, the wound that can never be closed. The cut is a signifier that no meaning can close, the very space of utopia.

Fontana’s art, among others, is an art that opens, that executes cuts on the surface to open the possibility of an arrival. Like any authentic chimera, the cut tells us nothing about what is to come. Utopian art is openness, but openness that can never be closed; it is a radical absence, not a postponed presence; and any attempt to fix the content of the cut is a way to restrict it. It is not intended to say, to find a unique and unique logic in creation; but that she herself be a space where an infinite number of unexplorable paths is proposed.

All mean, all show, all say is a repeat, a common place that has already been traveled. Utopia, the non-place, is perhaps the only territory open to contemporary art. Absence is the only mark of an ever renewing presence. The cut is the condition of the possibility.

On the other hand, these tears in the painting give the painting a third real dimension, placing it at the height of the sculpture, an innovative element that will powerfully influence many similar experiences later. But there is more, the “open wound” on the canvas seems to open a black hole through which the concretion of the painting is lost and a window to infinity is opened. In this regard, the author commented: “I pierce, the infinite passes through there, the light passes, there is no need to paint” [5].

Fontana builds territories of passage that ask for them to travel through them and proposes the monochrome as a livelihood for the trip. “I tried to put several colors on the canvas but the cut does not support them,” Fontana confessed, explaining why he created compact works from a chromatic perspective. He created a monochrome niche in conceptual art, ahead of a decade, to its official birth established by art historians with the first exhibitions of Monochromes Exhibitions by Yves Klein. 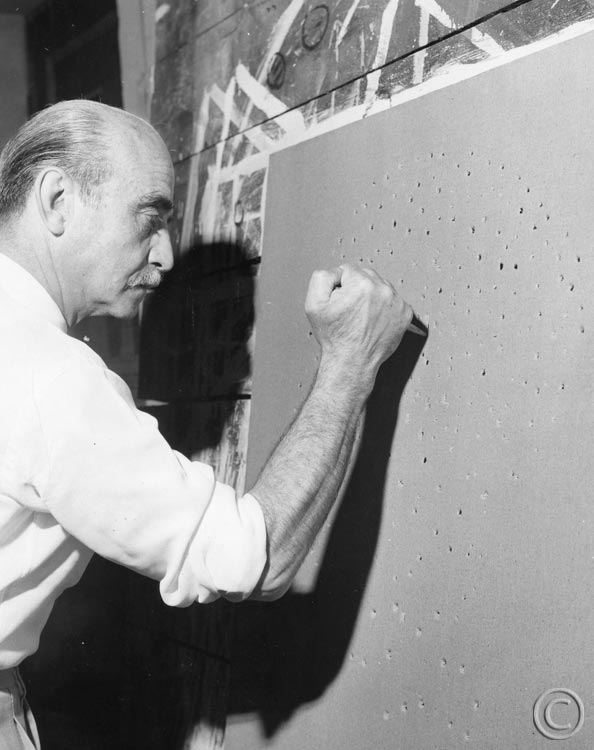 Formally Fontana’s work does not present marked complexity; laconically we could describe it as follows: perforated monochromatic canvases, with indentations and perforations synchronously performed; but this does not detract from the absolute relevance to the work that, with an extremely personal language, addresses the real through metaphor, distancing and fragmentation. He appropriates, with great mastery, a material conception of painting that validates his work.

It is a new vital project that goes in search of an artistic community of “our times”, but what makes it potentially universal is its propensity for creative freedom, a demystifying language that annuls all possibility of statism, an inclination for otherness in the form and in the significance. A work that advocates a fundamental artistic law: freedom in art.