20 days of protests that have freezed most of the cultural activities set in Santiago and the whole country, at the beginning for the schedule and public transport restrictions, now it is due to the amount of demonstrators who meet and the risk of looting or space destructions.

Most of the cultural institutions have just suffered aesthetic damage in their facades and have been respected as artistic expression places. In this scene, we ask theaters and cultural centers located in the middle of protests, to know in which wahy they have face their program during that time and how some of the activities has been taken up again.

From the Municipal de Santiago, Leonardo Pozo, the general manager, says: “The cancellation of the shows is due to the safety of the workers. We have a duty to deliver functions to the general public and fulfill our social obligations, that also has to be balanced with the safety of the workers and, in that sense, we decide to suspend all our functions. In the field of caring for clients, we think a lot about the safety of the client that is coming, of the spectator that comes to the theater and in that sense we did a survey and we realized that the clients also preferred not to come. And what did we do in the meantime, while we canceled the theater’s functions or activities? What we did was work internally in the development of the next functions, the most immediate today is Fausto, we have been working every day with deferred hours and monitoring the situation of the city in terms of seeing the security and thus we were preparing the day Today we are close to the premiere of Faust. Prior to that, on Thursday 7, we have the function of the general rehearsal, which by the national context we decided to open it to the public and that has helped us to maintain the moral and also the mission of the theater. We hope, once these incidents happen, resume the activity in a normal way.”

“Sometimes fiction anticipates reality, not because we are fortune tellers, but because the theater has that ability to observe the world, question it and metaphorize it.”

The general coordinator of the Teatro Finis Terrae, Amalá Saint Pierre, reflects on the role of dramaturgy, noting that “sometimes fiction anticipates reality, not because we are fortune tellers, but because the theater has that ability to observe the world, to question and metaphorize it. That is how one day before the social outbreak, we premiered our own production “La apariencia de la burguesía”, written by the outstanding playwright Luis Barrales and directed by the visionary Aliocha de la Sotta. The work, freely inspired by a work of the Russian Gorki prior to the Russian Revolution, speaks of a Chilean middle class family trying to overcome a crisis while outside a political and social revolt… The day after the premiere, that omen became flesh. Unfortunately we could not give it to the public since the State of Emergency and curfew were almost immediately applied, forcing most of the Santiago’s theaters to call off their functions. This has generated an invisible consequence for the public: the unemployment of the artists who have not been able to work at night and large losses of the theaters that many of them will not have how to solve at the end of the month. This is why our responsibility lies in bringing our theater back to life and dynamism in the cultural sector that has been greatly affected. And if we can contribute to reflection and dialogue with a work that points to contingent issues, then we feel it is necessary to reopen our theater.”

The communications manager of the Centro Cultural Estación Mapocho, Camila Aliaga, also points out that the operation has been partial: “We as a cultural center keep the opening to the public from 9 in the morning with free entrance, we have from Monday to Sunday the sample of Foto prensa organized by the Foto prensa from 11 am from Tuesday to Sunday, the installation is also available Toda siempre es poca by Pía Salas, along with the photographic documentary Agua para todos by the Peruvian Briam Kim Espinoza. Although the operation of the Mapocho Station has run smoothly these days of social mobilization we have closed at 5 pm on average as a security measure for our workers and visitors, on the other hand the activities of the general public have been reagendadas in mostly for 2020 we still maintain the Asech entrepreneurship fair that will be held this November 6 and due to the contingency we add to our calendar the Cabildo del libro, which will be held on Saturday November 9, where we convened with Editores de Chile to this citizen meeting, in addition to November 22 comes the Chilean Pulsar Music Fair, which turns 10 years old, and in parallel during this week we have rehearsals of the opera Don Giovanni that will be presented on November 21 at the Regional theater of the Maule, that has been the dynamics of the cultural center and how the activities have worked”.

Roser Fort, director of the Centro Arte Alameda, says that “(we are) in a cultural space located in the middle of the zero zone as they call it now. Yes we have been affected by the mobilizations, but we are part of the work of the mobilizations. We have re-adapted, we have changed our schedules to be more participatory, we have performed free functions so that we have debate and reflection and we are also optimistic, we feel that this call to mobilize generates optimism so that there are important changes in our education, health and that we all have more access to the culture that is what enriches this society, we invite you to review our programming and continue participating, come on, you can!” 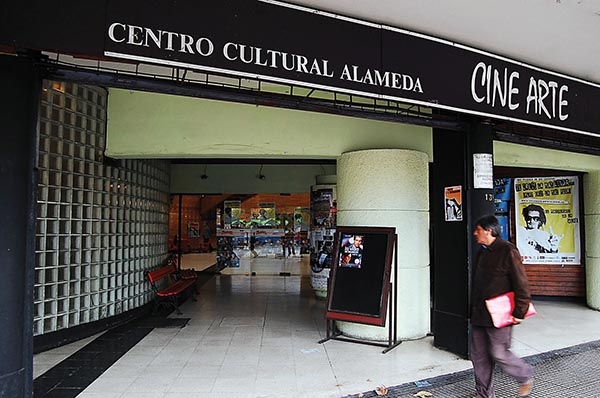 We feel that this call to protest generates optimism so that there are important changes in our education, health and that we all have more access to the culture that is what enriches this society.

In Barrio Bellavista, Leo Lobos, coordinator of the 20th Century Yolanda Hurtado Workshop, states that the space “has affected its work routines and cultural programming, as a large part of the people and institutions of Barrio Bellavista. Theater programming scheduled until January has been called off and we have had to reprogram and reassign priorities. We have canceled the Inauguration of the collective exhibition of 15 contemporary Chilean watercolorists, curated by Elby Huerta and Ismael Allendes, until further notice. Our cafeteria is offering service from 10 to 16 hours every day, in a climate of uncertainty and lack of security for our team. We also wanted to continue with our assembly work and rehearsals of the Malformados theater production, which we hope to release on November 13. We believe that social demands are fair and that the authorities must resolve on the underlying issues that have caused this social uprising, for the good of the whole society”.

With these statements, and a quick review of the billboards of other institutions, it is clear that the culture has sought ways to adapt to the mobilizations so as not to give all the work behind some lost presentations. The invitation is to review the schedule and plan visits to keep alive the spaces of artistic expression that will be needed to overcome this difficult moment.

*For this article we tried to get in touch by different media with Gabriela Mistral Cultural Center, Universidad de Chile Theater and Teatro del Puente Theater, however, they haven’t answered until now.