The book Filtraciones (Leaks in Spanish) by Federico Galende does not pretend an art book, under the author himself: “it is a book which makes art the sign of many open spaces in which it is urgent in Chile to fill one day with an open public conversation”. In its more than six hundred pages, a series of 45 interviews to various agents of art history in Chile, among artists, philosophers, writers or critics are included.

The title Filtraciones corresponds to the idea of ​​a conversation that flows freely between the cracks of the official history, each interviewee comments from his experience after a certain period of observation and reflection. The interesting thing is that there is talk about an already constituted scene, in fact validated, but that is not exempt from myths. Galende prefers the conversation as a journalistic tactic, since the informality and ease of this leads to more personal reflections (which may bother his interlocutor) even act as triggers to strengthen the memory, seeking to exhibit it and not rebuild it. 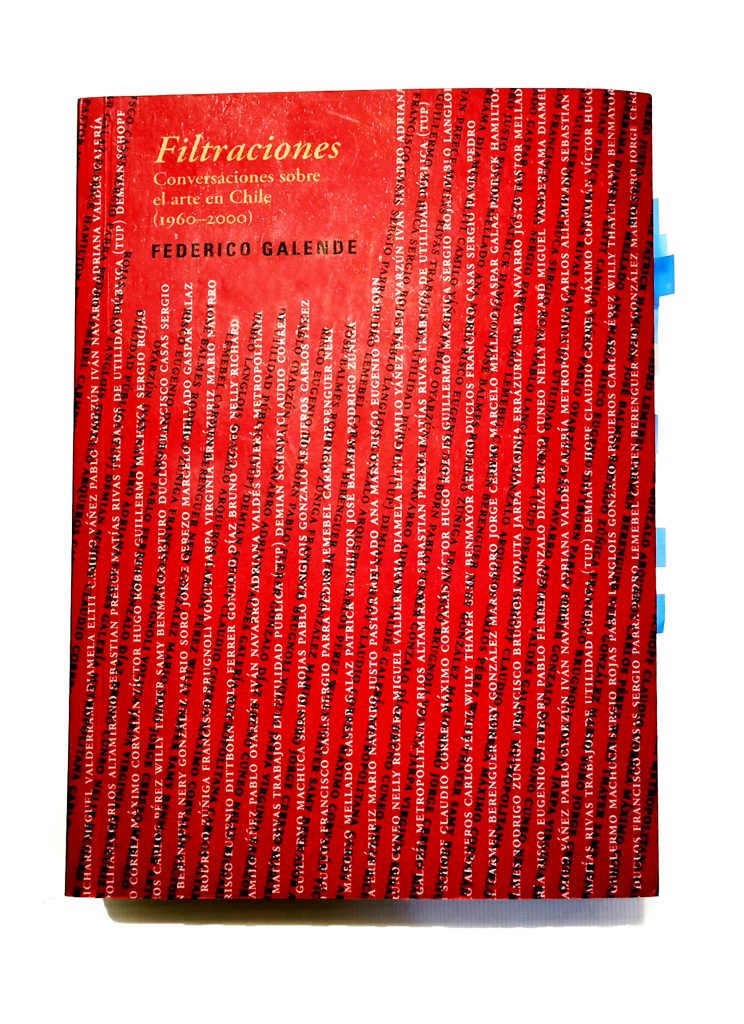 The period covered by these interviews is between the 1960s and 1990s, covering a large part of the artistic crises that have manifested in Chile. The idea is that the political of Chilean art is reduced to the dictatorship, however, this trap does not include other important crises such as:

the policies of the school of Fine Arts and its dismantling, crisis of representation against muralism and posterism, serialization of engraving, photography, new media, experimentalism, conceptualism, cultural management, the art trade, among others.

The book is divided under three fundamental moments, the first has to do with the years in dictatorship, the closure of universities and the new authors who invaded the Chilean theoretical territory, such as: Barthes, Foucault, Derrida, Deleuze, Kristeva, Guattari, Benjamin, Sontag. We are presented with the “problem” of painting that, paradoxically, does not begin its crisis at this time but was something that had been happening before the putsch, inside the School of Fine Arts. Galende tells the story of the entrance to the university of Samy Benmayor: “He had just finally entered the art career of Chile, he buys all his supplies, stands in front of the blank cloth with the briefcase containing the acrylics, the brushes and the rest of the utensils and then he hears that the painting has died..”

In this period the end and the return of the painting were contemporary, the representation and crisis of the model coexist with ephemeral and objectual art. In this context, the exhibition Delachilenapinturahistoria by Eugenio Dittborn takes place, giving a twist to the traditional Chilean art: “Modifying in its interior the relationship between the manifestation of the visible and the structure of the decible.” Within all the artistic experimentation where it is worth mentioning artists such as José Balmes, Gonzalo Díaz, Carlos Altamirano, Carlos Leppe plus the groups such as TAV (Visual Art Workshop) with engraving or CADA (Collective Art Actions) with their interventions in the public space, is that it appears Margins and institutions of Nelly Richard. That ends up applying the term “Advanced Scene” to all those heterogeneous practices. Of course, some artists recognize themselves in this concept but others in front of each other become separated. In Filtration we can read or re-read about these disputes to realize that the official story tended to clear this scene, presenting it already digested. 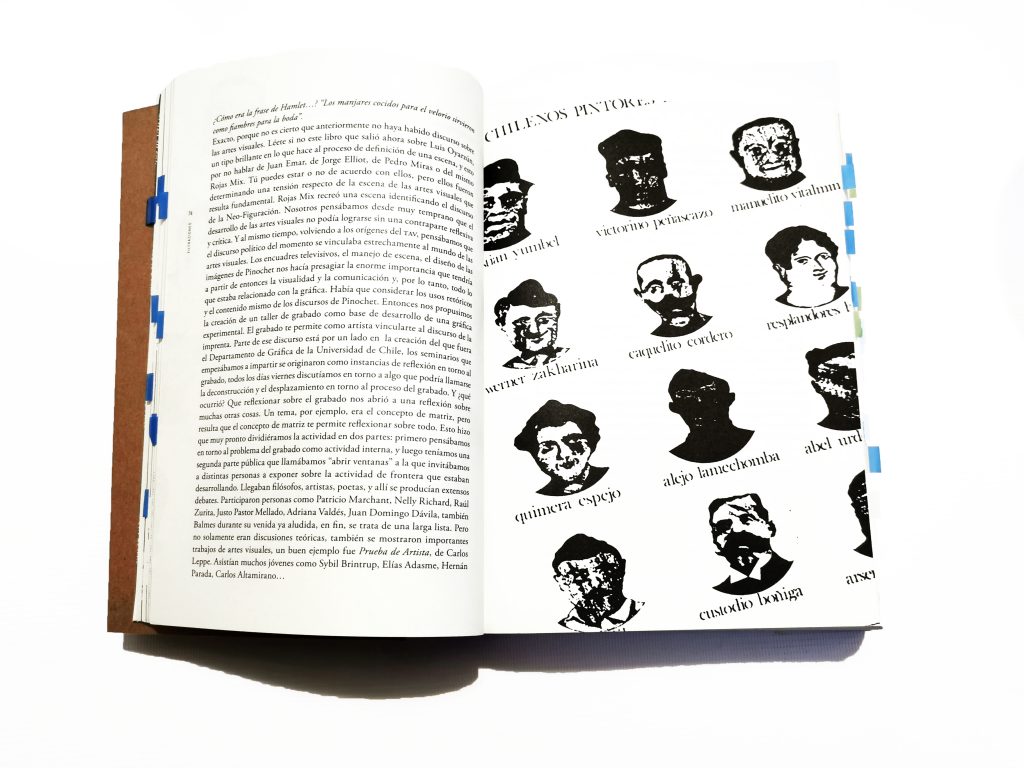 The second moment is the period of the return to democracy, it was understood as a kind of generational change of artists, Galende comments that they read themselves as: “catastrophically optimistic and happily nihilistic.” And that they were moving away from the suffering concept of trauma. The disappearance of the curfew begins to move the artistic discussion from the academy to the bars and ditches, the university (such as University of Chile or the Catholic) would also lose its hegemony: “I had arrived to make crafts a framing and privatization device of art, but overlooked the artisanal need for art to be made public and deterritorialized.”

Guillermo Machuca tells of his ignorance regarding modern art in 84 or 85, appealing to his education at the University of Chile: “We were with Langlois in a Bellavista neighborhood bar, past midnight, and in one of the bar’s walls there was a black and white photograph that showed what for me was nothing more than the portrait of an elegant European transvestite of the beginning of the century (…) it was nothing less than one of Marcel Duchamp’s famous versions of Rose Sélavy.”

Mario Soro also proposes his critical look at the past, particularly the dictatorship of the significant of the Advanced Scene: “A work like Leppe’s exuded these hybrids with enormous force but was not recognized by the speech. (…) The Advanced Scene never acknowledged another moment that was not the semiological frame of reference, and that was so from the beginning.” But he ends his interview by confessing that he felt some sympathy for the Advanced when he entered the Catholic. 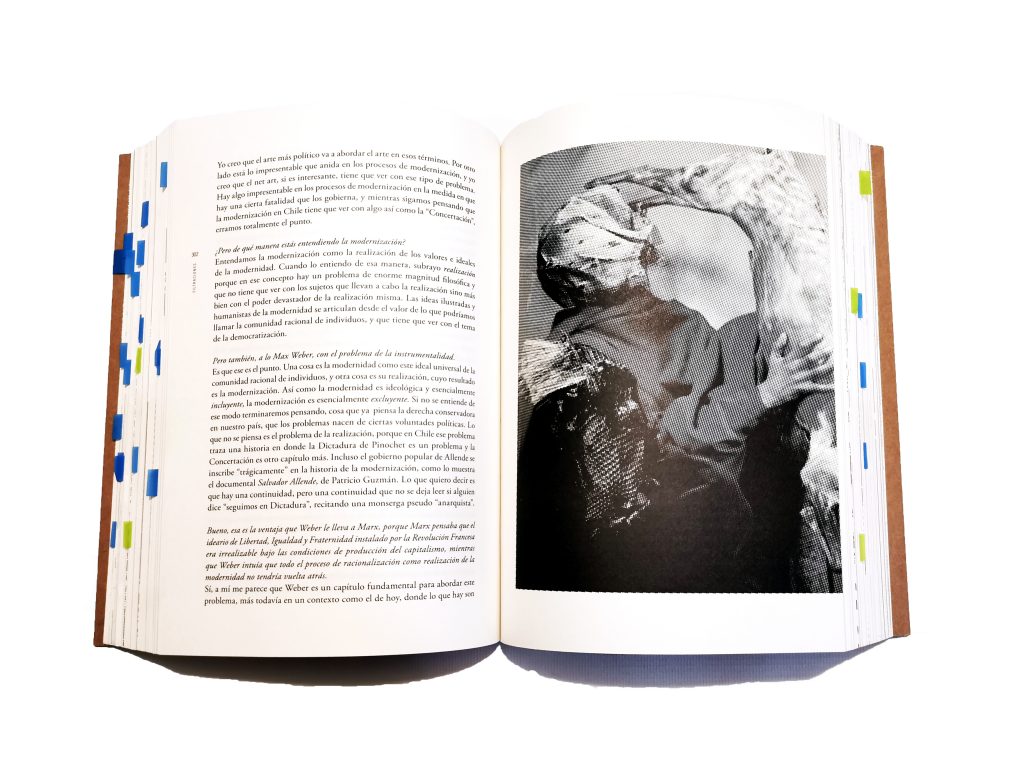 The third and last part of the book is about current affairs, where Chilean artistic practice has been commercialized for a long time in the private sector but it is also exhibited in international fairs or biennials. Galende in his conversation with Patrick Hamilton proposes his own generational chronology of Chilean art: “the first refers to the fall of the committed artist and the emergence of the Advanced Scene, where trauma is a kind of currency; the second refers to the newest generation of the 90’s, and the third is this, the youngest, where something like the artistic career arises.” To which Hamilton replies that his generation manages to get rid of the Advanced: “Like all manifestos, like Breton’s, for example. The rest does not matter, who belonged, when they fought, what work was more representative of that speech, all that doesn’t matter because it remains in anecdotal condition.” 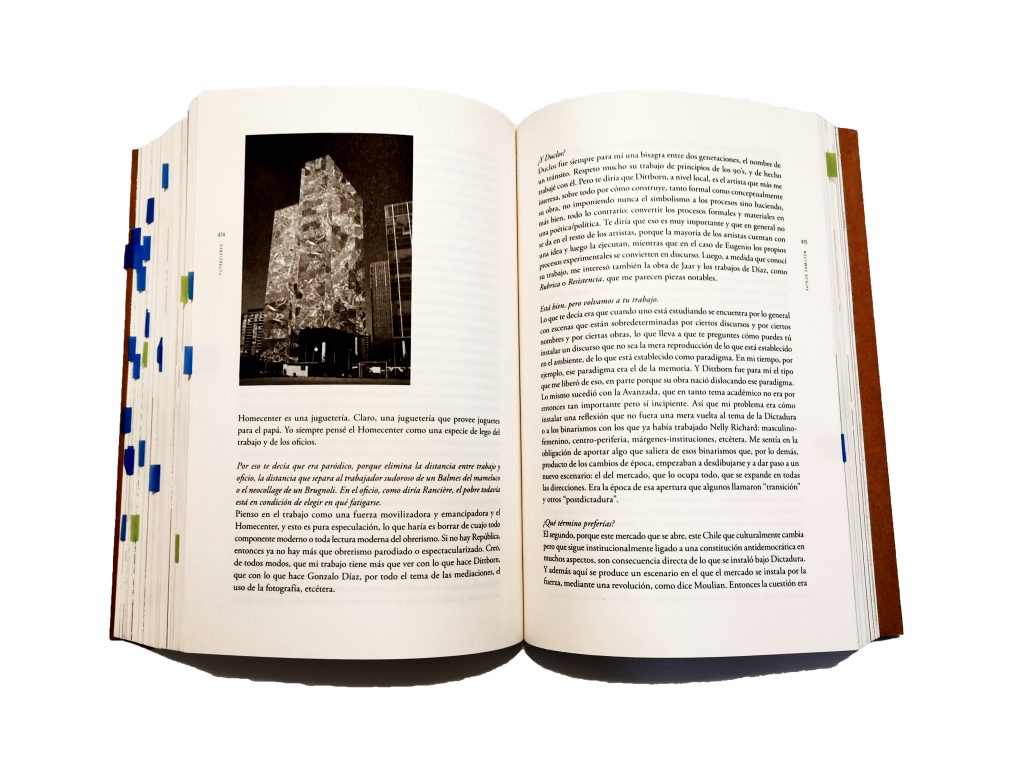 Finally, this series of conversations invite you to rethink history, to criticize what we are given for truth. In these times where post-truth is meme is when each reader has (and exercises) their right to build their own opinion. Pedro Lemebel with his characteristic sense of humor defines this idea very well: “Because I didn’t read the first book of this pod, they told me that there is the breed. And we would be the ballast. Between caste and ballast. Good title, right?”