Ema surprises and captivates. She is young, mother, dancer, wears her hair white. She is repentant about giving her son back to the adoption center. She wants him back and the world denies her call. What does the world know about Ema if it never has seen her burn? She is going to show you that the decision and a firethrower creates the fascination needed to do whatever she wants. The new film by Pablo Larraín has showings at the Cineteca Nacional in Centro Cultural Palacio La Moneda.

The density of language astonishes minutes from the beginning of the film, the strong marriage discussions that are promised in the trailer of the film are delivered from the beginning, when Ema and Gastón discuss the possibility of asking their son back, or conceive another son, although for Gastón paternity is not possible for medical reasons. The option to be parents was to adopt, and when they could they had the child some time and returned it. The recriminations are raw, as seen in the following dialogue:

“-Ema: When are we going to have a child?

-Gastón: We had a child.

-Gastón: We had a real child. And you throw him like a dog.”

So far with the information that the trailer gives us about the main motive of the film: maternity denied. Ema dances and burns. She fascinates the dancers of the dance company where Gastón is the director, questions the authority of her husband, seeks the social worker in charge of her son’s case to insist that they return the child. Mariana Di Girolamo plays this repentant mother of giving up her progeny, Ema, who has a complex, fascinating and sexy plan to have her son back? Is that the boiling jet that comes out of his flamethrower, the unstoppable and overwhelming will? How complex is the plan and what is the goal? The dosage of the information that Guillermo Calderón, Alejandro Navarro and Pablo Larraín made for this script makes this film a thriller, a search for an answer that keeps the viewer’s attention throughout the show and that even extends beyond the term of the projection.

“-Gastón: He burned your sister’s face”

The child is also a being that escapes from normal. He put the cat into the refrigerator, set fire to the hair of his aunt, Ema’s sister. Gastón, Gael García Bernal, recriminates every word of the son to the mother, to demand the family they promised to be, to show the love of a mother who could not demonstrate when had the child in her care. How to be a mother without being a mother? There is an interesting exploration of the protagonist’s sexuality, a display of sensuality and shameless coquetry that subvert the order of the traditional family to turn the attention and sexualities of a network of people towards the framework established by Ema. It is said that Chilean cinema depends on showing nudes, alluding to careless or insignificant reasons to introduce nude scenes, but the narrative conduction of this film and the careful treatment of the image during the orgy scene make the moment of a naturalness necessary for history. The result is sexy and overflowing with music, dance, light. There’s fire.

The search for culprits for the tragedy of her denied motherhood leads her to take in her hands a weapon of war capable of throwing fire, is it a way to join her incendiary son or is it just for the pleasure of feeling powerful? Real says, part of the soundtrack of this movie “If you give fire to my fires that does not give you power” and this is a kind of response in Destino, from the same band E$tado Unido, which seems a look from the people who witness to Ema as if she were an experience rather than as a person. The power that Ema emanates is given from his name, which is rooted in “strength”, and does not depend on a husband or a weapon to manifest.

Another point in favor of this movie is the dance company. The choreographies designed by José Vidal give life to this experimental dance body that descends dancing down the hills of Valparaíso. Already in the promotional image of the tape you can see the sun contrasted with the silhouettes of Ema and Gastón, this is the sun, an intense sun that keeps visual similarities with an ovule, from the choreography that opens a tape where music and dance are part of the context necessary to understand the empowerment of the protagonist with respect to her body. The knowledge of the bodily limits and the reflection on the sense of art print a force that is manifested in each choreography of the film directed by Pablo Larraín.

Showings in Cineteca Nacional at 6:15 p.m. 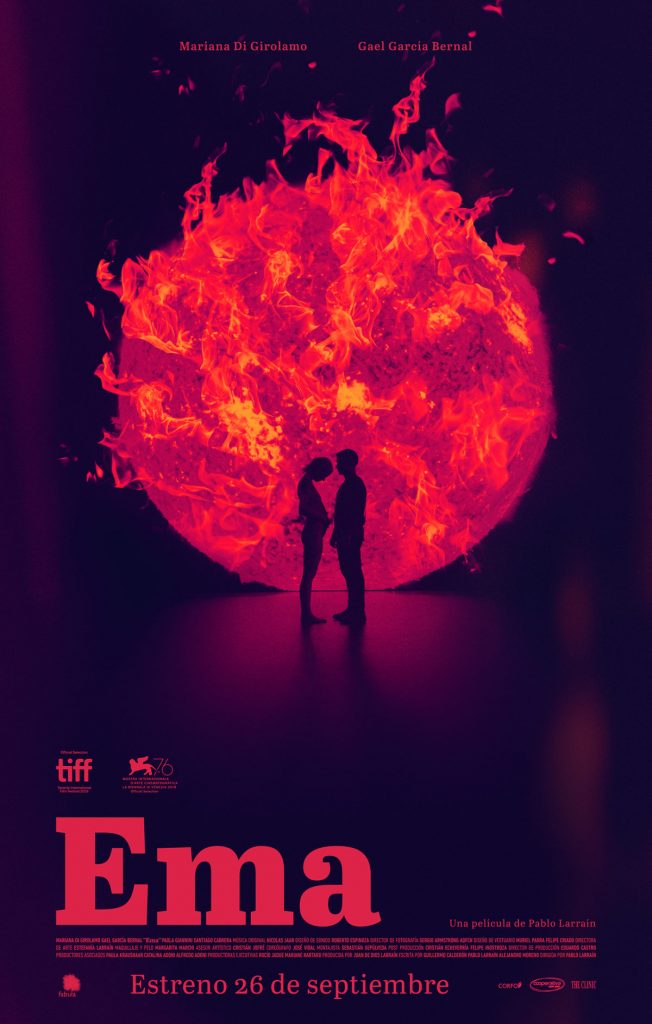 Tony Manero | After a decade of failure