The artwork called Los viajeros del Winnipeg (The Travelers of Winnipeg in Spanish) is a mural composed by Roc BlackBlock, an urban artist who traveled from Spain to celebrate the 80th anniversary of the ship arriving. The piece is located in the leveled area of the Museo de la Memoria Musseum and is part of a series of activities that are carried out in Chile to celebrate the historical event.

On September the 3rd, 1939, a fleet of 2200 Spanish immigrant of all ages disembarked looking for political asylum after being pursued by the Franco regime once the civil war ended (1936-1939). The Winnipeg pass, as the ship was called, built one of the most outstanding migratory movement of the 20th century in CHile.

80 years after the event between poet Pablo Neruda, who was appointed Spanish immigration consul in Chile by former President Pedro Aguirre Cerda, several institutions have prepared a joint memorial program to remember the action.

This Wednesday, the Museum of Memory and Human Rights inaugurated Los viajeros del Winnipeg, the work of Catalan artist Roc BlackBlock that chronologically portrays the process of those who had to go into exile. Through the use of stencil in large sheets, the renowned graffiti artist printed images representing the crossing, in addition to including the names of those on board.

In this regard, Roc said that the work constitutes “not only an act of justice towards the past, but an act of the future to collect all these experiences and show them to the new generations. It is a debt to the Spanish people and art is a very powerful weapon for working memory.” 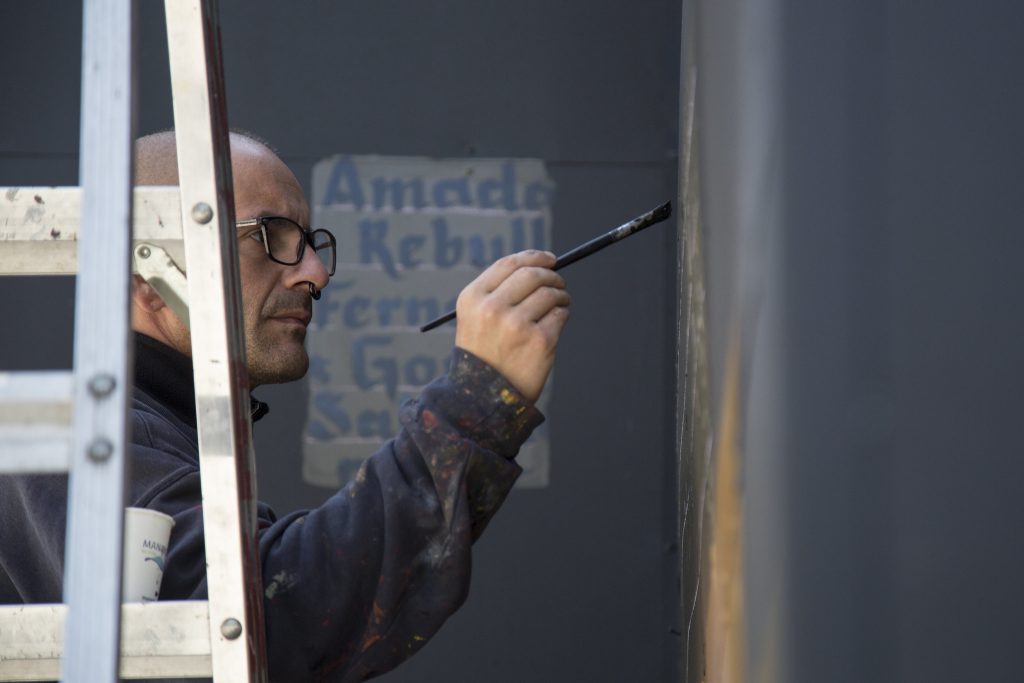 Who also had words in the milestone was Francisco Estévez, executive director of the Museum of Memory, who said that “this Neruda ship called it the ship of hope, and brought people from different trades and professions. That made the country make the slogan “asylum against oppression” real and I think that Chile now has to meet that cause again. The urban art of Roc is a commitment to this cause because it addresses a very important symbolic moment in the matter”.

In addition to the mural, the Museum unveiled original works by José Balmes, Hernán González and Roser Bru, Hispanic artists traveling in Winnipeg and who achieved a remarkable career in the national territory. Likewise, a cloth embroidered by Spanish women was presented before the expedition, which contains on one side the republican flag, and on its reverse the Chilean one. All these elements are located on the outskirts of the institution’s documentation center.

Likewise, the Museum will carry out two other commemorative activities. The first one is the launch of the blue ocean book don’t forget me. Winnipeg, the ship of hope, published by Rodrigo Rojo. While the second event consists of the exhibition of the documentary “Every life is a world”, a film biography of Víctor Pey, once the editor of the Clarín newspaper and the Winnipeg crew. Both events will take place in the Museum auditorium at 7 pm on September 6 and 7, respectively.

The tributes will continue with various initiatives in Santiago, Arica and Valparaíso, which will be developed free of charge during September.

Cecilia Avendaño | Between the itching and the charm