Algunos mitos sobre el cuerpo y otras siutekerías (some myths about the body and other siutic stuff in Spanish) is a contemporary dance play presented at GAM, which adresses the speeches that build the body ideology, looking for the meaning of a concept that repeats itself in million of minds without being repeated, even though there are leaders and speecehs that try to unify the body. The play is also a desire that the viewers must fill with impetus with their own corporealities.

“Your body is like the other bodies; you have no right to shame; you have no reason to hide something that is repeated in tens of millions of copies”

As an essay on the ontology of the body that is written with the movement, Some myths … it is a reflection if not humorous at least sympathetic about corporality, a thought that does not always accompany the dance of music, nor the sound of video, or text with image. Dissociating is key to questioning, and so is the lack of references to which to hold to initiate meaning. It is worth asking what does this gesture mean? But if the gesture goes without context – not even music – it can have an overwhelming enough of meaning. Or it can mean nothing. And nothingness – myths say – is incompatible with the body, with existence. 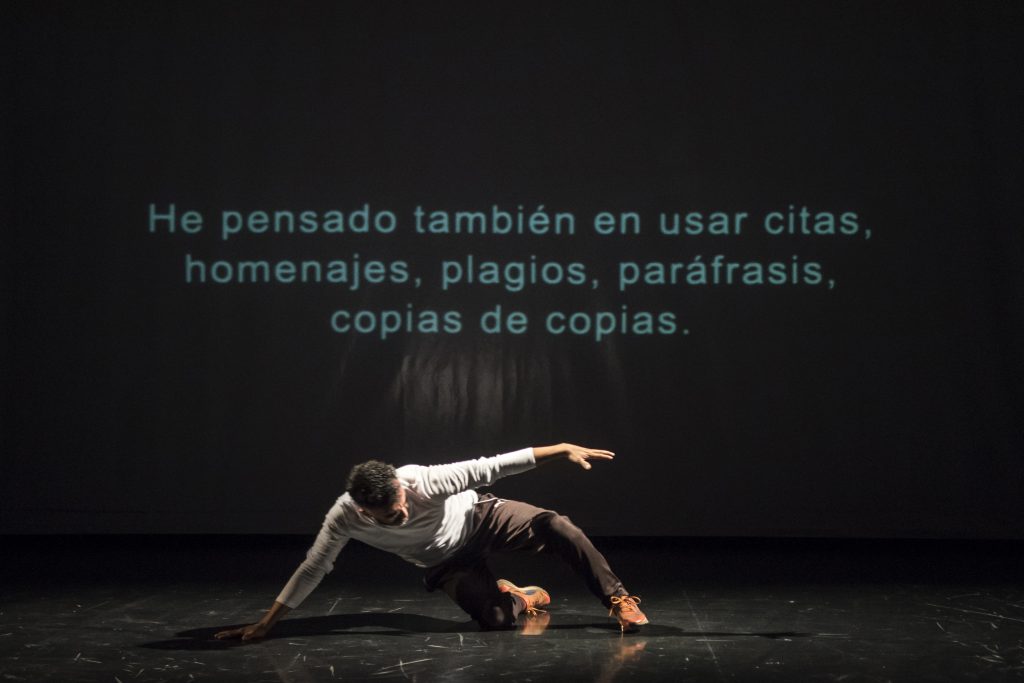 Is a definition of the body compatible with one’s own experience? Can the body express itself? Is a mouth that says “body, body, body” meaning the constituent stones of being-feeling the body or does it simply repeat an empty noun of speeches? We must consider that no matter how serialized the human body cannot be repeated, it is genetic craftsmanship; when speaking of “bodies” as the same thing – the body – conjecture precision, definitions are sought for a unit that does not exist in nature, it is theorized about the reality tried to explain what is immanent in sight as a spectrum.

“A vehicle for mind” is a common conception of the human body, which here is contradicted by modern looks such as Jean-Luc Nancy, who says “we do not have a body, but we are a body”, that is, we are this experience where each segment of the body is as valid as a surface that experiences reality as any other part of the body. A hand is valid as an expression of the body as long as it is capable of expressing everything that affects or motivates the body to its full extent; then the hand moves in a particular, repetitive way. “What does this gesture mean?” The question returns, the discourse on density, volume and finitude of the body also returns. 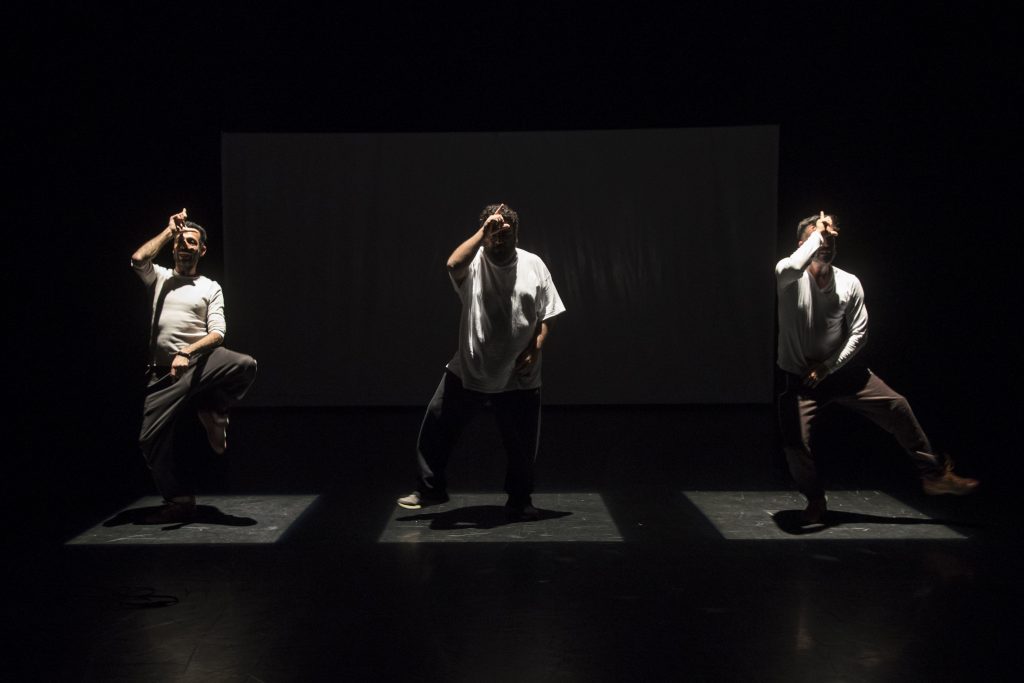 The body does not know the mind and the mind does not know the body. Dissociation is part of the ontology and is also part of the use of the body for the exercise of the law. The suspension of the will to “lend” the body and follow the will of a nation that embodies a politician or leader is an important part of the training that police and military receive. Obey (move) without questioning. From the beginning of this dance piece it is proposed that it emerges as “a fascist response to a fascist discourse”. Let’s look at one of Adolf Hitler‘s quotes that Hannah Arendt highlights in “The Origins of Totalitarianism,” where the fascist leader says that German soldiers “have constituted almost a unit outwardly, that these men really are uniform not only in ideas, but even his facial expression is almost the same.” The discourse on density, volume and finitude of the body returns, but this time it is projected on the ranks of Nazi soldiers who listen to the leader. A body that belongs to the nation, like millions of others.

A body with a flat screen instead of a head, a screen on which Salvador Allende’s face, Augusto Pinochet’s face, Adolf Hitler’s face, Don Francisco’s face are projected. A presenter who says “body, body, body”, the participant of a contest that answers “body, body, body”, an audience that builds his imaginary of his own corporality based on the stylized bodies of the models that accompany to the animator and the jackal of the trumpet. The media and their responsibility to the body of the mass. The body mediated for consumption.

In some myths … mediation occurs through the three men on stage – Luis Moreno, Ignacio Faulbaum, Javier Muñoz – talking about the experience of the body without placing the discourse from its masculinity that homogenizes the human experience. There is no room for the expression of, for example and opposition, femininity. To put it in the language of feminist manifestations of universities, “the female body” is not present. In the words of J. L. Nancy “The bodies are sexual, there is no unisex body.” There is no “one body” as there is not a single audience or a single desire, hence the challenge that artists make to make a wish – in this contemporary presentation – is an open door to any sense dump that the audience wants to make about the body of speech that the work emits. 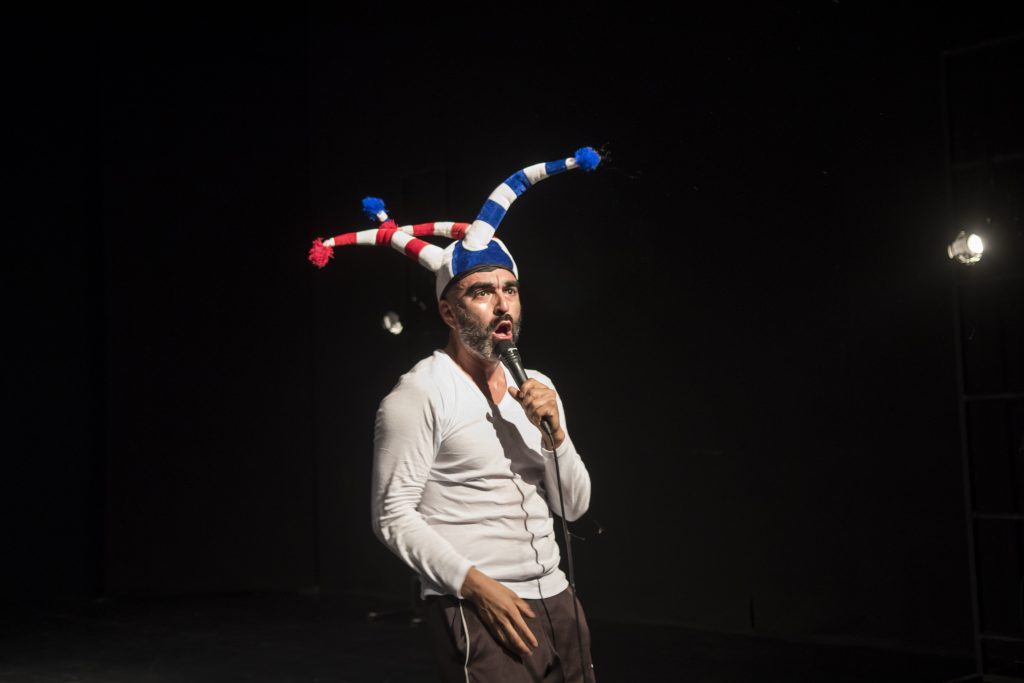 Under the direction of Luis Moreno, Algunos mitos sobre el cuerpo y otras siutikerías are presented from Thursday to Sunday at GAM until September 29. Go open of mind and body.

Los arrepentidos, A passage to normality