Paisajes para no colorear (Landscapes not to color in Spanish) is a play in which 9 teenagers between 13 and 17 years play the lead role and portray their experiences as women, as people who face the requirements of Chile, which imposes them roles and be silent due to, first, be women, second, be minor age. A sensitive critisism to the adultcentrism and the way that parents give the sex education, which is presented with plays from Thursday to Sunday at Gabriela Mistral Cultural Center until August 4.

Recommended -and also with discount- for adolescents, the play has no adults pretending to be minors, on the contrary, it is girls in transit to be accepted as adult women by society who climb the tables and give their testimonies and adventure. This is explained by one of them speaking with the most childish voice she can, in addition to pointing out that dramaturgy is a collective creation based on hundreds of testimonies. Then they begin with data for the statistics of the play: 8 of the nine are in favor of abortion, three have had sex, one saw his dad spit on his mother. 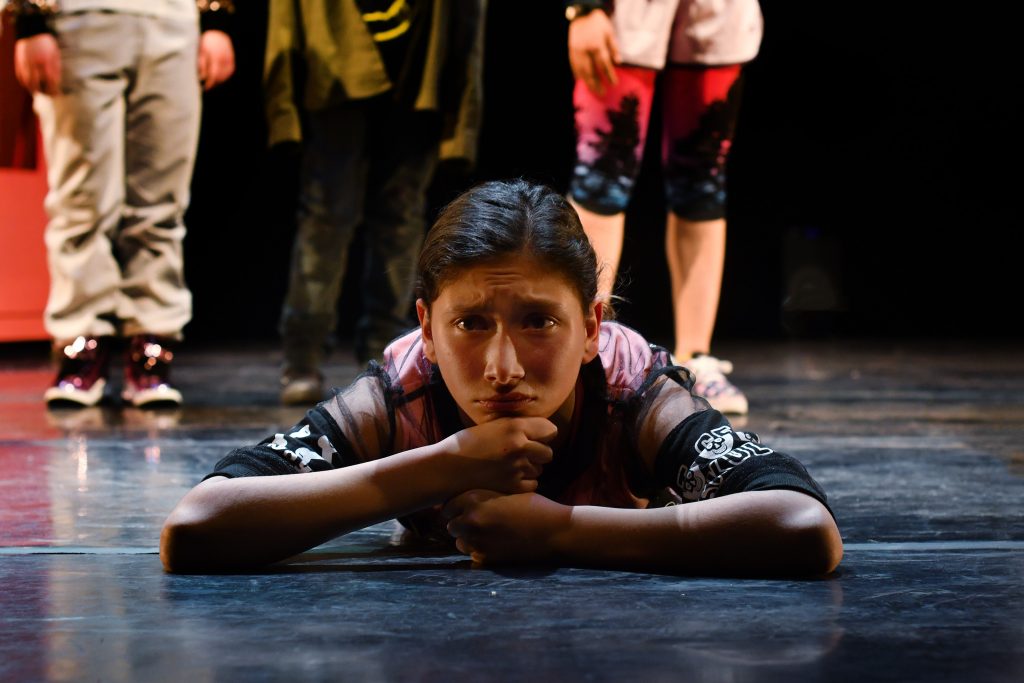 Given the name of the play it seems that the spectators will face a dense content, full of dark or depressing testimonies that speak of the abuse and systematic violence that feminist organizations have denounced in recent years. But it’s not like that. In fact, after the statistics that describe the 9, we see a picture that causes laughter among the audience. One of the girls has a plastic baby that cries constantly. When he hits her against the floor so that she stops, she receives the accusatory looks of her companions, who recriminate her for being a bad mother. Then the young woman explains herself, narrates her forced and sudden motherhood. Blame the mayor of the commune, whom he calls the father of his baby. As she says, the fault lies with Joaquín Lavín. Is that the mayor had the initiative to encourage sex education by distributing rubber babies and electronic circuits in schools, and the girl on stage touched a baby son of a mother who abused drugs, so the bus shakes so constant while crying to simulate the withdrawal syndrome that is inherited. Another thing that the baby inherited is its afro-descendant skin color. The girl, meanwhile, wants to leave the baby and play with her friends, but if she does she will fail biology at school. Here it is worth asking: What does Chile understand when we talk about sex education? Paisajes para no colorear is a proposal from the educational role of the theater. 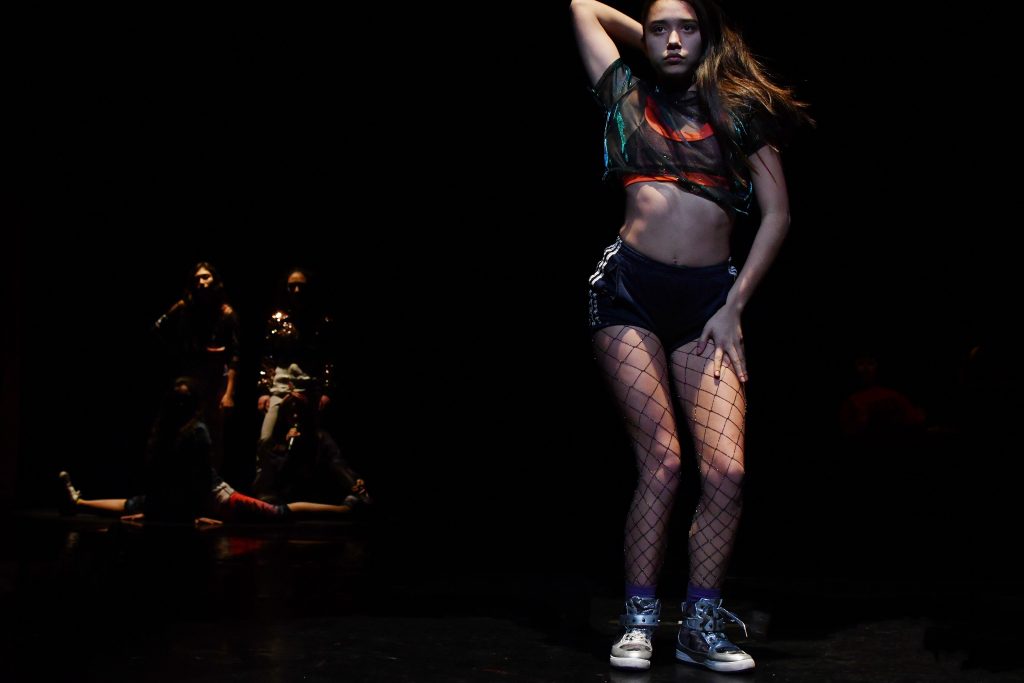 Change. Another girl takes the floor. She wears shorts and a top that exposes her belly button. She Dances. From the bottom one of the group asks “Stop, don’t you see what you provoke among the men in the audience? Stop dancing like that. ” Why, question the girl. Why you have to stop, act differently, dance differently, why you have to do anything differently from the way you want to do just because some men are not able to think outside the basic and sexual way they were taught by other men and other women; she asks. Later this group of moralist ladies will take the floor to defend their stance on stage. Satire and contrast.

Change. “Do you remember that at the beginning we told you that one of the group saw her dad spit on her mother? His dad learned about this scene and decided not to come to any of the functions. We are now asking someone in the audience for help so she can feel that she is talking to her dad.” This is perhaps the most emotional picture of the play. Loaded with a feeling that points to the struggle between childhood and adulthood, an empathic transit with the mother -the big woman- who confronts the discourses of the feminist mobilization of the school with the intimacy of the home, where she commands the strongest, that is, Dad. “Look at me, dad,” but the man remains unperturbed after his diary. “Look at me, dad, listen to me, I don’t want to have to get you out of my life.” 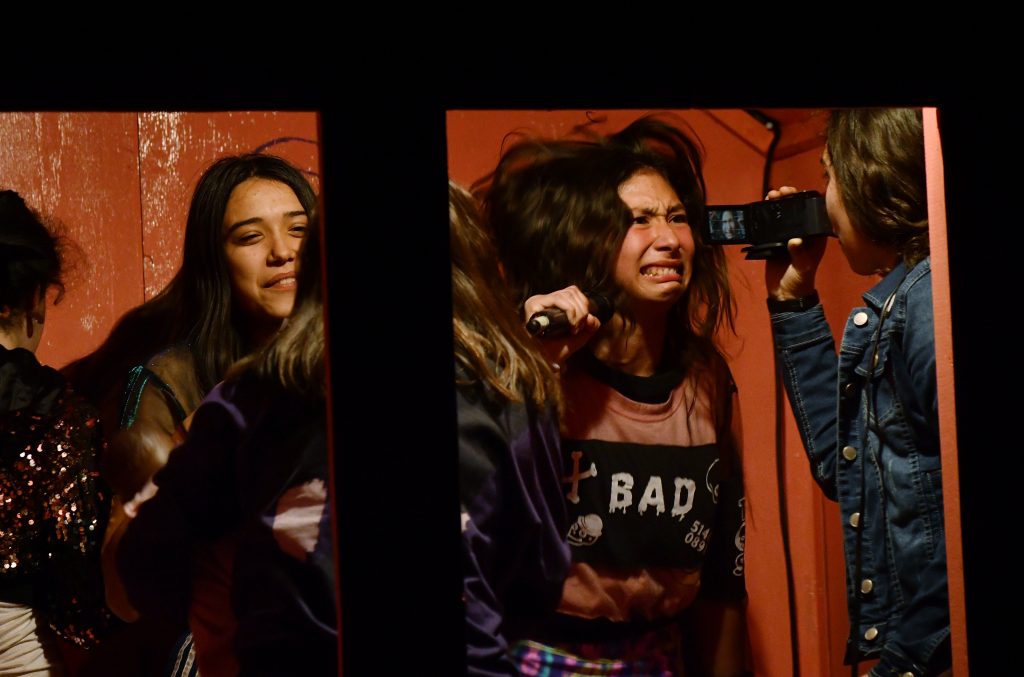 The tension of crying springs on the stage and between the audience, and the emotionality is conducted fluidly to a time when the 9 take refuge in the dollhouse to sing. “Come and tell me the truth … how did you stop loving me?” The group of women sings and transmits their emotions through social networks, they run their makeup, but they continue to sing together and full-blown, like the girls they are (sometimes). A moment of sorority, a spool of friends, a catharsis that emphasizes a message: together they are more than nine.

The scenery is simple, a dollhouse, a small table, chairs and an blowup doll. Everything has its moment of expression, even the wrist. The object woman, read by the teenage girls. The society that allows the commercialization of a reduction of women, questioned by 9 women. 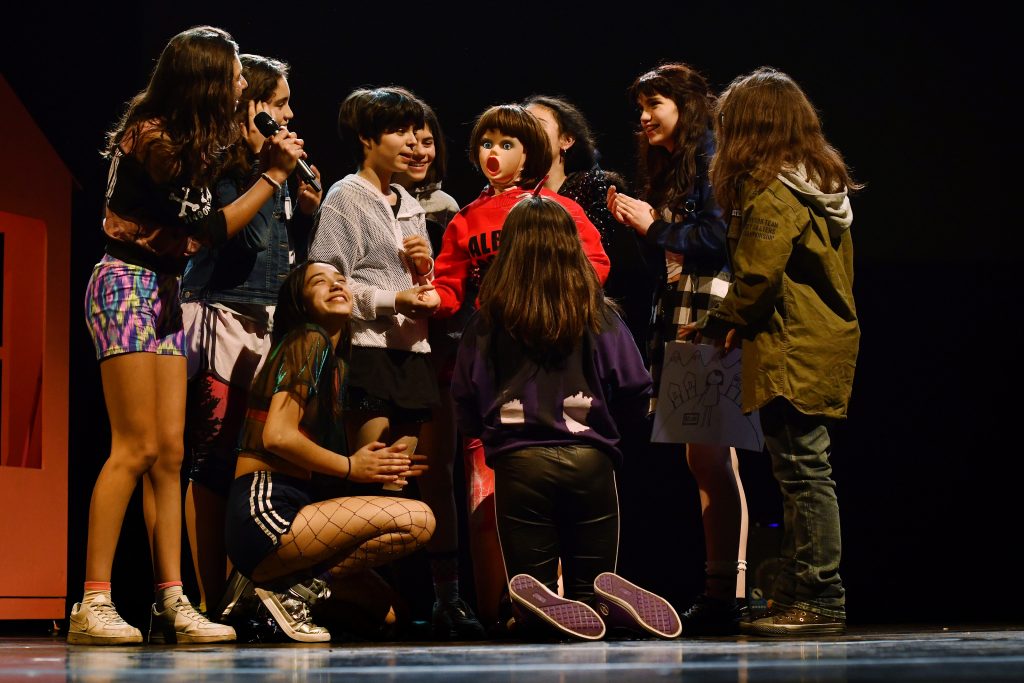 Directed by Marco Layera, Landscapes not to color is presented from Thursday to Sunday at GAM until August 4. The function of July 26 will have a subsequent conversation. Teens between 13 and 18 can buy the ticket for only CLP2,000 directly at the cultural center’s ticket offices.

Los arrepentidos, A passage to normality