Greta is a humpbacked whale that is beached where the women family have met to commemorate the anniversary of the faimily’s father disappearance. Greta is the mother’s name as well, her husband called its favourite whale with the same name. Years after, the beaching solves secrets and old kaweskar rites in the piece Greta which has performances in the recenly open Teatro Mori Recoleta until July 28.

“The rite had the obligation to be completed with a sacrifice, what did you do? Daugher, tell me the truth”

Of the three daughters of the marriage, only the youngest, Delfina (Daniela Lhorente), lives with her mother. She starts the play talking to the whale Greta, while behind her the songs and marine movements of the cetaceans are projected. Soon her older sisters arrive, Azul (Kathy Salosny) and Yubarta (Carmina Riego), so that the whole family can come together to commemorate the missing father. Blue hardly supports the presence of his mother, Greta (Coca Guazzini), but makes the effort for his sisters.

They try to talk until Delfina announces that there is a whale stranded on the beach. For the mother, it is an opportunity to see the whale again, which she blames for taking her husband away. It happens that everyone in the family linked their lives to the study of cetaceans, and years ago, the father got on the boat to see his favorite humpback whale, Greta, and did not return. For the mother, it is an opportunity to collect her revenge, against life, against widowhood, against the whale. 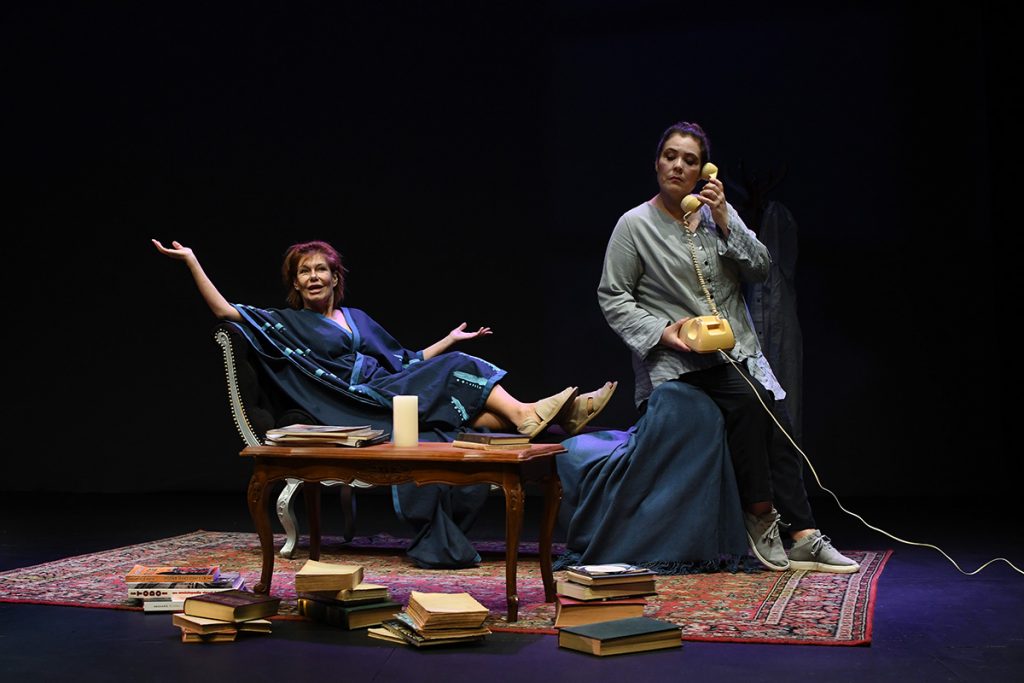 For daughters, it’s something else. An answer. A debt to a father who left them the inheritance of love for the great mammals of the sea. They call the coast guard fast, the sailors, but they can do little during the storm. The raging sea and the untiring rain make difficult the rescue of the stranded Greta, while the family thinks about how to avoid that the whale overheats to be out of the water. Delfina wants to avoid this death at all costs, guilt would not let her live.

“You uesd to go swiming with your friend every single day, but you used to leave the bathing suit at home”

Is that Delfina, says Greta, has been going out at night to sing to the sea. Blue attributes the exits to the stress of living with her mother, Yubarta tries to reconcile the positions, but Greta insists. For her, Delfina has followed in the footsteps of an ancient kaweskar ritual to make the whales beached, an ancestral feeding rite guided by women. Like the 4 women who had to guide the whales to Mocha Island to guide the rest of the souls of the dead. Yes, the same reference as in Mocha Dick, a work that also fixes its attention on southern whales. But in Greta the difference is that the women on stage are 4, as in the ritual.

Yubarta remains almost aloof from the conflicts between his mother and his sisters. She has other concerns. She thinks of the conscience of the Greta who remains on the beach, ready to die alone, separated from his own. Unable to call the others because only the males sing. A female can not call other females or, at least, there are no records. Does Yubarta think in his own loneliness? Her father called her a kind of whale, just like Blue, but with a much stranger name. It is that Yubarta is the different one. The one who does not live with her mother or have her own family. Greta knows the answer, somehow intuits that the stranding has come to unlock all pending conversations of this family. It is not possible to save the whale while they remain stuck in silence. So it begins “Daughter, I know, I’ve always known, when you uesd to go out to swim every day with your friend, but you used to leave the bathing suit at home”.

The original idea of ​​this family drama, coastal, reflective, is by Ximena Carrera and Javier Ibacache, the dramaturgy is in charge of the same Ximena Carrera and the direction has shared responsibility between Constanza Brieba and Jorge Díaz Wilkinson. The project is part of the Science + Arts + Audiences program and is co-produced by Festival Puerto de Ideas, Teatro del Lago and Quilicura Cultural Corporation. It also has the collaboration of Mori Foundation and Mori Center and the sponsorship of the National Museum of Natural History MNHN.

20 years have passed since her husband was lost at sea, and Greta blames the other Greta, the whale. For Blue it is incomprehensible. For Blue it is more likely that his father left with another family, like so many seamen. But for Greta no. The lack of answers increases the tension until almost equaling the noise of the storm that shakes the outside. To warm things up, Delfina says her father visited her and announced the stranding of the whale.

Can these women help the whale? To find out, it is necessary to attend the Greta performances, which is presented from Thursday to Sunday at Centro Mori Recoleta (Bellavista 67) until July 28.