“… as ‘simple’ as they were in appearance, they were not ‘elementary shapes’ themselves,

but complex forms that did something more than conveying

Aimed at exhibiting the beginnings and basis of minimalist, post-minimalist and conceptual art, a sample comes to PROA Foundation (Buenos Aires, Argentina) which gathers early pieces by Bruce Nauman, Fred Sandback, Sol Lewitt and Dan Flavin, under the curatorship of Katharine J. Wright.

The exhibition Minimalism, post-minimalism and conceptualism / 60s – 70s is presented as the setting of an “aesthetic universe” where forms and devices converge, with the premise of contextualizing and linking the diversity of expressions of an art with a “minimum of artistic content “, according to the philosopher Richard Wollheim (1965).

In a first reading, the collected works respond to the common features of productions that aimed to eliminate all illusion, all detail and all temporality. Despite the manifest rejection of its main exponents of being confined within minimalism.

However, in a second instance it is possible to determine another of the precepts that unite these artists, who agreed on the will to work with focus on the iconographic and representative dispossession, in pursuit of the construction of presences that privileged the idea over the realization.

In this sense, the term presence serves to go beyond the tautology of what you see is what you see and expand the journey through these “artistic trends that revolutionized contemporary narratives”, as stated in the presentation of the exhibition ; and through Wright’s curatorial proposal.

In this way, to think from the contemporaneity of the work of these five artists, “who stripped the art to its essence” -as the curator indicates-, brings us closer to the postulates that Georges Didi-Huberman expresses in the book What we see, what looks at us, in relation to the dialectical and critical quality of the images that arise within this “movement”.

In this framework, the author manifests the evolution of these specific objects in kind of subjects, noting that “that what or that that of the minimalist object exists as object so obviously, as abruptly, as strongly and ‘specifically’ as you as a subject”. 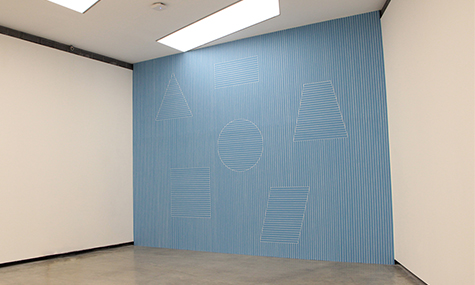 Thus, this question refers to a relational character of these works and to the paradox of minimalist objects, which Didi-Huberman rescues from Michael Fried: “On the one hand, their pretension or tension towards formal specificity, geometric ‘literality’ of the volumes without misunderstandings; on the other, his irresistible vocation for a presence obtained through a game -factually equivocal- with the dimensions of the object or its placing in a situation with respect to the spectator “.

In this sense, the confrontation with the work “Untitled (to Donna) 6”, 1971 by Dan Flavin, located in the last of the rooms of the foundation, gives the viewer the possibility of an experience that stops referring to the presentation of the forms and materials of a period of avant-garde art in the USA, to exalt the immateriality of light and its configuration in a space apparently emptied and confined.

On the other hand, the “situational sculptures” of Fred Sandback created with acrylic threads, arranged in the largest room of the PROA Foundation, offer the possibility of transit and intervention of the vacuum as artistic contents, even though the accompanying text reinforce that “they do not refer to anything beyond themselves”.

In this line, the tour of the works of Sol Lewitt is presented as a tension in which the decision is more important than the execution, where the presence in the room of his “Opinions on conceptual art” contribute to the insight into the mind of someone for whom “the idea or concept is the most important aspect of the work”. 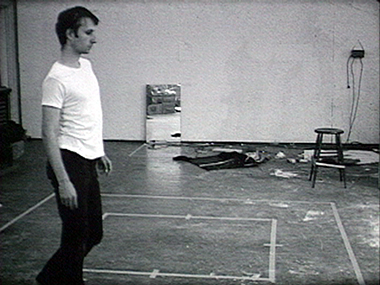 Finally, this cut also includes, among other works, four videos by Bruce Nauman in which the artist’s performance in 1967, not only give a framework to what is known as post-minimalism and conceptualism, but also highlight the need to undertake projects far from any narrative.

In this sense, the curatorial proposal of the exhibition, which deals with a “spatial Rationing” from the title of its curatorial text, is not far from this relational attribution of the minimalist objects, however contradictory it may seem, instead, it is made explicit to the point out with words of Susan Sontag the importance of recovering our senses before these works: “We must learn to see more, to hear more, to feel more. Our mission is not to perceive in a work of art as much content as possible, and even less to extract from the work of art a greater content than the existing one. Our mission is to reduce the content to see the thing itself.”

Debugging the excess to see the thing itself does not seem to translate into emptying the appreciation, but in the call to place ourselves in that place where the essence becomes protagonist subject, and where there is no attribution but care in detail.

“However, in the face of this perfectly closed and self-referential form, we must undoubtedly admit that something different might be enclosed in it … Then, restlessness removes the object from its perfection and all its fullness. The suspicion of something that needs to be seen is imposed in the future, in the exercise of our gaze, which becomes attentive to the literally private, therefore dark, emptied dimension of the object “(Didi-Huberman 2017, p.78).