“They laugh at me because I’m different,

and I laugh at them because they are like the others” (Kurth Kobain).

I wonder if there is someone who hasn’t secretly dreamt about setting up his/her own fable thinking about his/her family, friends and unbearable neighbor, or even better with unknown beings that you see at the street who have that undisputable face of rabbit or frog, beings that immediately make you get back into your childhood when you realized that Peter and the wolf, that symphonic composition written in 1936 by Sergei Prokofiev, which mix music and text with a narrator participation along with the orchestra in a sort of fable that even captivated from long time ago when you read Aesop, Samaniego and Jean de la Fontaine, important haracters of a topic that encourage several artists to recall that part when the imaginary creates as many fantasizing as what  Jean Jacques Grandville, Marc Chagall and another current ones as Leonora Carrington, Greg Craola Simkins, Esao Andrews or Marion Peck projected, only to highlight some, and who I-of course- add Marcela Trujillo (Maliki – 1969), Chilean visual artist and illustrator  who at Sala Gasco exhibits Fábula Secreta, gathering paintings and illustrations that, over the emotional traceability, give account of a work project that, even though leaves self-representation behind, doesn’t give up its characteristic style.

Faithful to his nature, Maliki develops a forked vision that on the one hand responds to the accumulation of images that the unconscious rewinds in a combinatorial of early correlates that range from classic children’s stories, where many of his characters are animals (Little Red Riding Hood, ugly duckling, Los tres chanchitos or Pinocho) to which they add, comic books with which recreates these secret remembrances, as a cathartic symptom where to some extent retakes an innate habit through: “Humanized animals that teach values ​​and good customs in tender snapshots of an ideal adulthood “. Approach with which lets glimpse that drawing animals is connatural to childhood, and therefore when it decides to recreate aspects of daily life, forms a non-existent scenario capable of overwhelming the intimate album with pictures drawn so much from their childhood and family imagination, which is perceived in large numbers in Mom and daughter, Dad and daughter, Grandmother and grandfather, Nephew and aunt, works that ultimately constitute an important part of personal visual roots, as well as those from a spectrum of referents so extensive, that they can even be included from the Flemish Gobelins for their work Animal Meeting (2016/17), fashion magazines, stickers and posters of various kinds.

It is not surprising to see animals with wigs and outfits with that frivolous and superficial touch as a sublimation or as a result of a process of transformation of a bestiary that is already accentuated in the series of characters (13 drawings – 2019) with slight touches carnivalesque, but also ironic and magical, in a kitschy delirium that at the same time exaggerates the features of these beings that without even suspecting it becomes the basis of an eventual “prequel”, since they reinforce a plan of work with what has already been expressed in Ciencia ficción femenina (2011), Tumores femeninos (2012) y en Mineros sensibles (2013), to which is added this Fábula Secreta, which questions the most intimate memory through a bold puerility that is legitimized by the creation of a new lineage in the one that also appear more contingent topics such as feminist friends or Girlfriends.

Strictly rigor that framework the supposed “infantilism”, is not such, since we are in front of an artist who goes from the crazy Maliki of the biographical comic “Quiero ser flaca y feliz” (2015) to “Ídolo, una historia casi real” (2017), the plastic artist who makes self-knowledge a new route of expression where, at the beginning, it mitigates sarcasm, showing itself at times much closer and more naive and in whose features we access a scenario in which Trujillo has been working for years , and that with this hallucinating fabulation in a certain way seals a period, with a technical-expressive development that can be appreciated particularly in the pictorial terrain in which, as his curator Rolando Báez states: “The existence of crossed beings, both by elements humans as animals, in colorful plant environments that do not look for references of nature, but a chromatic palette that uses cartoons and classic Disney films. 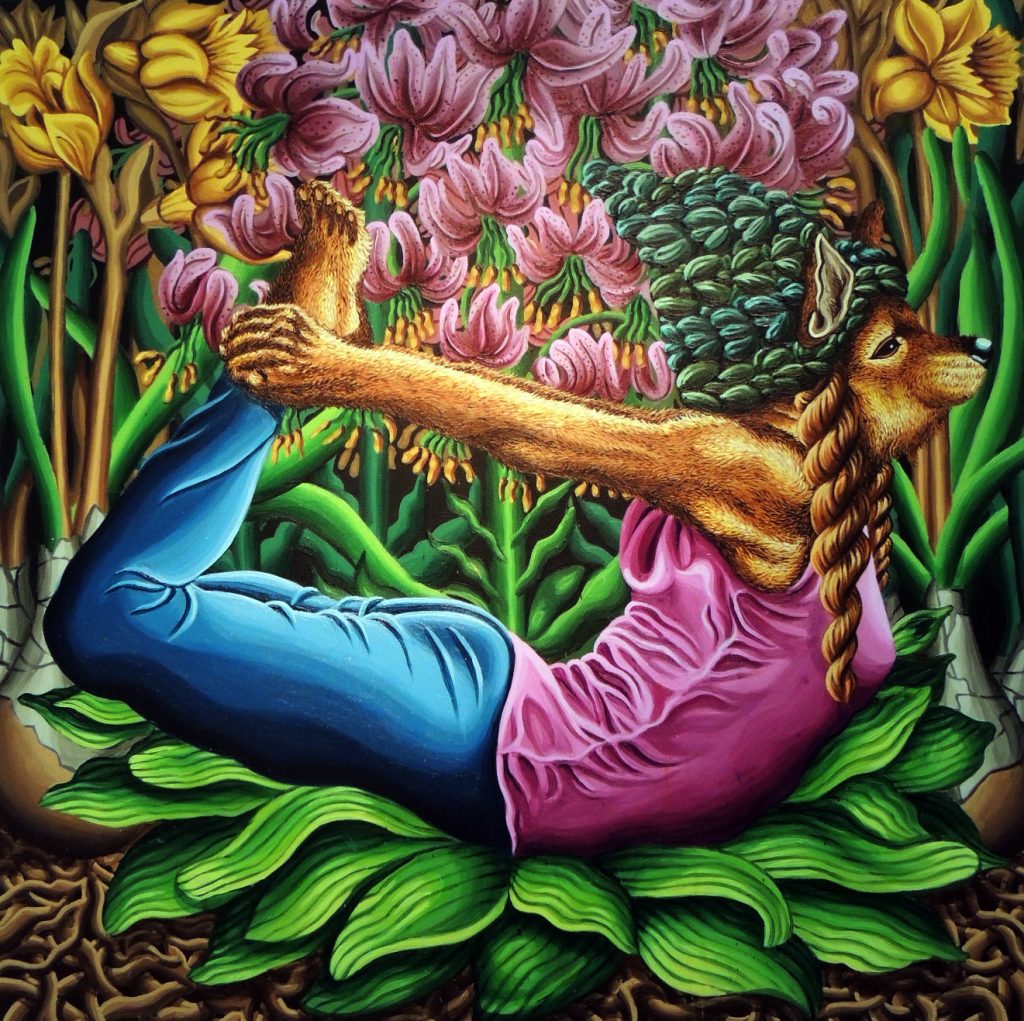 The nod to the film Alice in Wonderland (1951) is essential to create an atmosphere that, when intervened, recognizes the codes of an artist who, in contrast, invites herself to be carried away by a laborious brushstroke and a semi-jungle thickness as exuberant as unusual, where they also reverberate the same precepts of the comic with which he has developed an important part of their projects in which both worlds converge, without one standing out against the other, but rather complement each other, as happens in this intimate racconto, full of emotions enveloped by a sweet mordacity that goes from the trivial to the construction of a slang or visual archetype that the author knowingly elaborates as part of a practice that rests in the common place of the family album and in characters that affinity give rise to an imposture where the chromatic audacity mixed with that sumptuous decoration gives him the quota of expressivity necessary for him to be playful spirit of Marcela Trujillo resonate with increasing power. 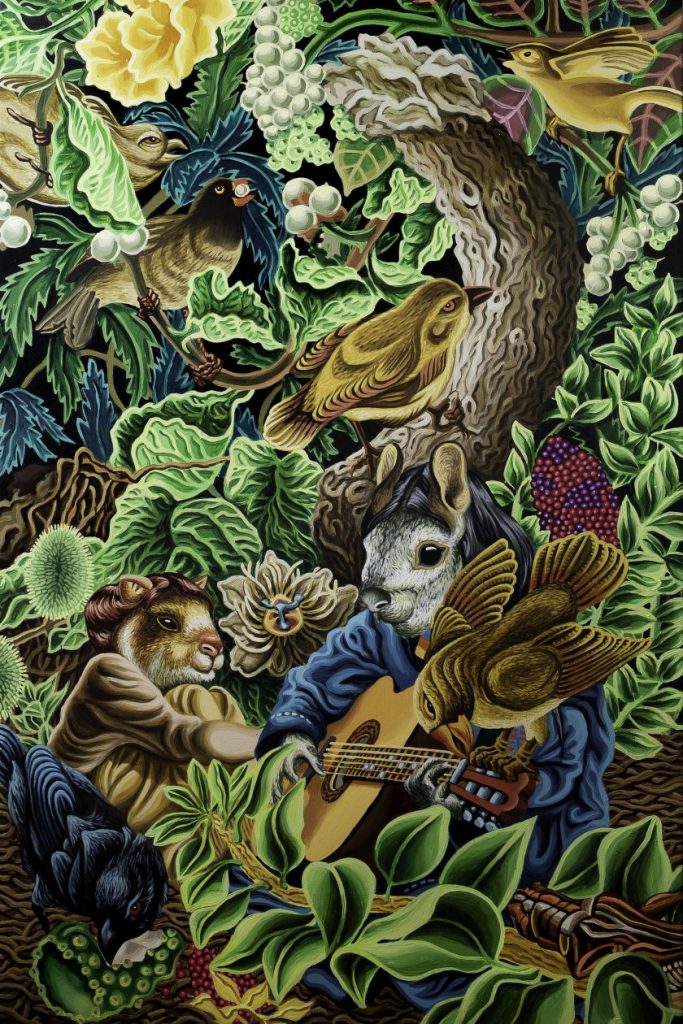