La piedra oscura (the dark stone in spanish) takes its name from the last unfinished piece by Federico García Lorca. The theatrical piece starts in the Spanish civil war a while after the murder of the writer, and has as main character the republican Rafael who little by little reveals his bond of love with the playwright and poet. The drama presented in Ictus made the crowd shudder in its release.

“Help me, so you can watch your children to their face and say them that I saved the book that you read in the school”

Rafael (Felipe Zambrano) woke up wounded. Beside him a soldier who does not look at him, his stretcher is in a blue room, simple, with a small window. It is an enemy hospital and Rafael is now a prisoner of the Francoist troops. The Spanish civil war is shaping up as an endless hell. Diego Madrigal plays Sebastian, the young soldier who refuses to even tell Rafael his name. Orders are orders. García Lorca (Cristián Álamos) walks around singing his musical poetry. There is a pending love debt and Rafael will not face death without fulfilling his promise. 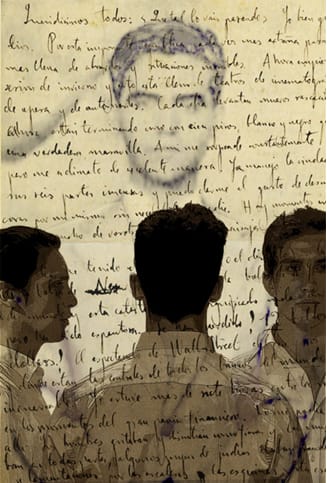 When the soldier Sebastián refuses to listen to the prisoner, a screening of García Lorca begins. On one side of the stage the same author of Bodas de sangre writes, while live his image is projected multiplied, superimposed, disoriented, loss. Shut up or I’ll shoot you, says the young man holding the rifle. Please shut up.

“In La piedra oscura there is the need of saving artistic creations, which yeas, they do have a political direction but before so they are art”

Rafael Rodríguez Rapún, is a Republican, studied engineering but is working in a theater that knows Federico García Lorca. This last love story invisible by the Francoist side, is rescued by the investigation of the award-winning Spanish playwright Alberto Conejero. The piece has motifs that recall El beso de la mujer araña, by the Argentine Manuel Puig. Political prison, the understanding that is generated between both prisoners (in this case prisoner and gendarme). However, the directions to which the conflicts of both works point differ. In Puig’s fiction the request made by the inmate has a political orientation. In The dark stone there is a need to save artistic creations. Yes, they have a political orientation, but before that they are art, creations that the world will lose if the republicans are defeated or if Rafael dies. Works that will disappear like Lorca himself.

Nobody can disappear completely

“Who could kill a poet? Who could kill Federico García Lorca? “Asks Rafael. The questioning remembers the Chilean memory, shaken recently by the journalistic revelations that point to a murder of the Nobel Prize for Literature Pablo Neruda. In recent editions of Confieso that I have lived in charge of Seix Barral he realizes that Neruda knew about the relationship of Lorca and Rafael “Little by little I was realizing that this boy was the persistent love of Federico, his last love. His name was Rafel Rapún. He was a worker’s origin. “

“As because of you hospitals are painted blue

and schools and maritime neighborhoods grow,

and wounded angels filled with feathers”

“Federico can not leave the theater,” says director Macarena Baeza in an open rehearsal before the premiere. For her the story of Rafael and Lorca is “a story of impossible love”, which however has an intensity that survives the decades that have elapsed since the murder of Lorca. The fame of poet of the Spanish vate is relegated by its facet linked to the tables. Before his disappearance he asked Rafael to take care of his works, and he “is not an ideologist, he had to be there”, according to Baeza. But love is stronger reason than any ideology, and Rafael insists.

“Nobody can disappear completely,” says Rafael, in another desperate attempt to Sebastian listen to him, help him, to save his soul that fades before the remorse of having separated from Federico. If they had not separated, Federico would not have gone to Granada. Federico would be alive. Rafael is wounded, provided only with his memories and his love tries to convince the soldier. His tragic fate moistens the gaze of the poet who remains on the edge of the stage, singing accompanied by the guitar of Manuela Reyes. They are compositions based on verses by Lorca. “The dawn united us on the bed”, they intone.

“The dawning join us together above the bed,

the mouths put over the blasting

with perpetual blood that is spilled

And the sunshine entered through the closed balcony

and the coral of life opens its branch

over my shrouded heart.”

At the end of the premiere performance, when the lights go out there is a moment of silence before the applause begins, but that silence is interrupted by people trying to contain their tears. Many people ended up moved by the presentation and the applause was broad and abundant in cheers. The features of La piedra oscura are scheduled for Friday and Saturday at the La Comedia of theater Ictus until June 1. 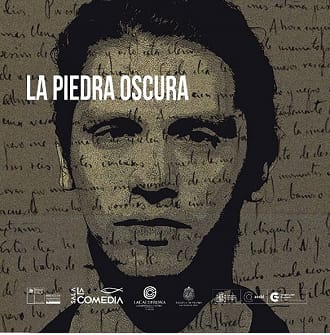