“The oldest Machi would become the grandmother of all the whales, a huge albina creature that was pushing the death into the underworld.”

A rare mixture of mithology and historic events call into question our occidental believes through a piece of great tidiness in the staging, lighting, and staging. An exhibition that anyone could think it was rehearsed for years, since from the audience you can notice the training of each of its members, who with a small amount of lines they convey the necessary for the crawd to question, think and feel the experience that seen above the board. 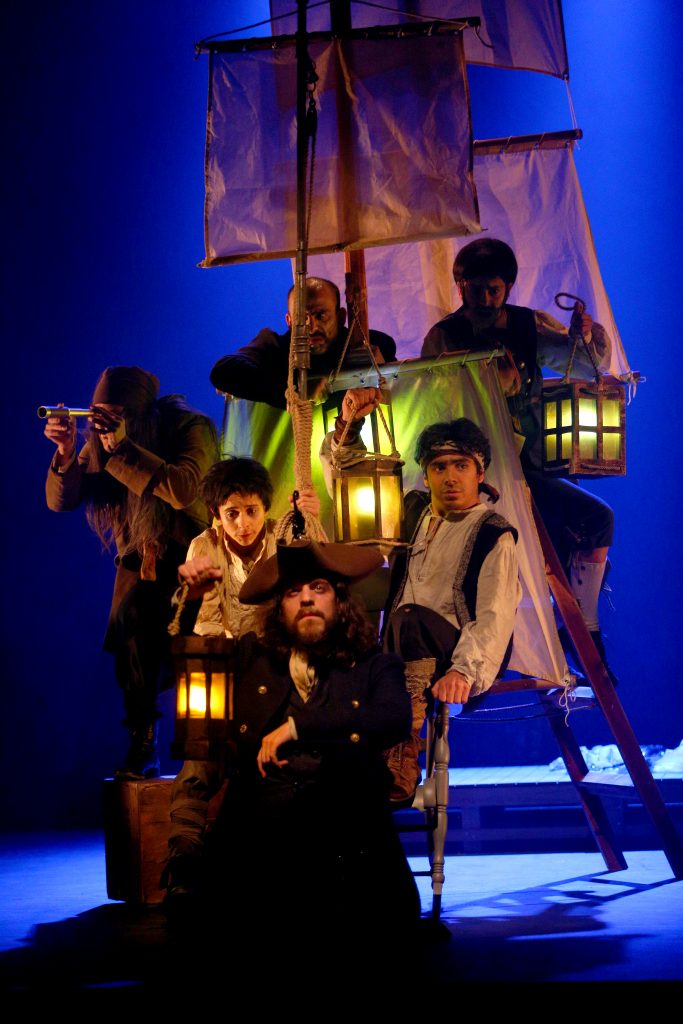 There are six sailors in a boat, lost in the sea for months, in search of the white whale Mocha Dick. Killing this huge animal is the only mission they need to complete to return home with their hands full, with the captain conforming. But as time goes by, interpersonal relationships become complex, racial and sexual hatreds begin to surface slowly, but directly. Every moment is used to revile the other, the inferior, the weaker, while seeking arguments to kill him as if he were just another animal, like those soulless bodies that Christianity would not have considered a sin if they stopped living.

But nature comes against the human psyche and the security that sailors try to demonstrate. The deepest fears begin to take over the actors, the panic and irrationality become part of their lives, the despair for the eternal, but nonexistent, return is increasingly powerful. And what will happen to the whale? Sailing is not easy, storms and sea monsters appear for the ship to be shipwrecked. It is even considered that they are cursed or that there is a traitor among them, but the blindness of the captain to achieve his mission, obsession and greed, lead them to continue incessantly.

The reasons behind the complexities

What complexities could emerge from this white whale search? In which way Mocha Dick is “as Chilean as the Cueca or Chile-bells”? What contemporary realities can be abstracted from the piece?

“His old body, full of marks and scars, was covered by harpoons of those who had tried to capture it, a detail that attributed to him supernatural characteristics. The whalers of Nantucket and New Bedford said that it was immortal, that sometimes it appeared in two parts at the same time, that it was a kind of marine god sent to punish the abuses of the captains committed at sea”.

Mocha Dick is a complex work not only because of the few dialogues, but because it works on issues that are settled in the Chilean idiosyncrasy in a very subtle way, but at the same time very intense. In just 80 minutes, the company makes explicit the problem of the Mapuche conflict from a natural, logical and extremely human perspective, in what way could a person who is born, grows and lives be convinced, with a different connection to the western one, in relationship to nature, to attempt against it? In what way could economic ends make him betray his principles of life, which are equal to those of Mother Earth? Several questions could be drawn from this work, in which the Mapuche world is supported in its action by the strong connection we have with nature, by unrestricted respect for what lives next to us, for respect for life that so many times it seems to be non-existent in the face of the illusion of money. 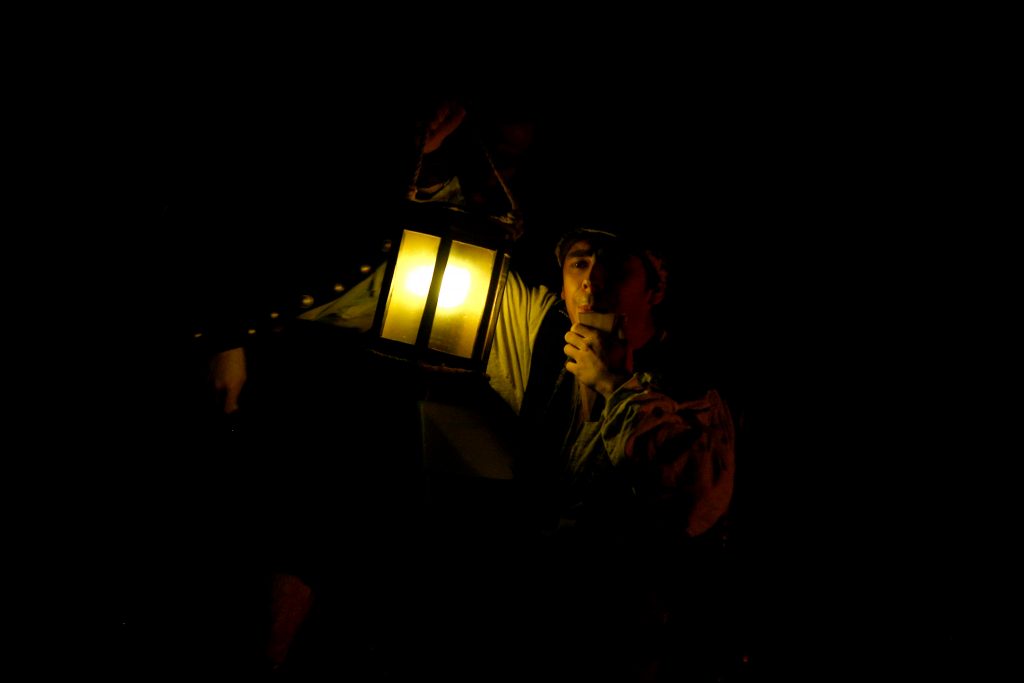 “This is not about the whale,” says one of the sailors, because indeed the whale is the reason to address other realities that are experienced daily in our country. Discrimination, ethnic, social, racial and sexual differences. Not for nothing is a Mapuche myth gathered as a central motif of the work, “The ancestral story holds that the island Mocha would be the resting place of the soul of the great warriors, who would be carried there corpses in their transit to the other world. The Lafquenches – Costuches Costinos – used to push their dead towards the island by laying them in small canoes, waiting for four machis that inhabited the place to come out to receive them. The oldest of the machis became the grandmother of all the whales, a huge albino creature that was responsible for pushing the dead to the underworld. The whalers of the nineteenth century insisted that their Mocha Dick was a divinity; for our ancestral people it really was.”

The mapuche inside the boat. That poor ignorant whom they try to assassinate continuously; who is accused of treason, is he really a Jonas? Every night he looks for a way to keep the whales away, to divert the course, to save the only thing he knows as true: life. Can you judge then by your actions? Is not it an analogy to what happens with the lands that are in the hands of foresters? Does economic power, trade, triumph in front of humanity and the natural? Are questions, the answers can be addressed from the work Mocha Dick.

Based in the graphic novel by Francisco Ortega and Gonzalo Martínez, Mocha Dick was premiered on Saturaday 27 of April at Teatro UC, by La Mona Ilustre. You can watch it until May 25, from wednesday until saturday at 20hrs. 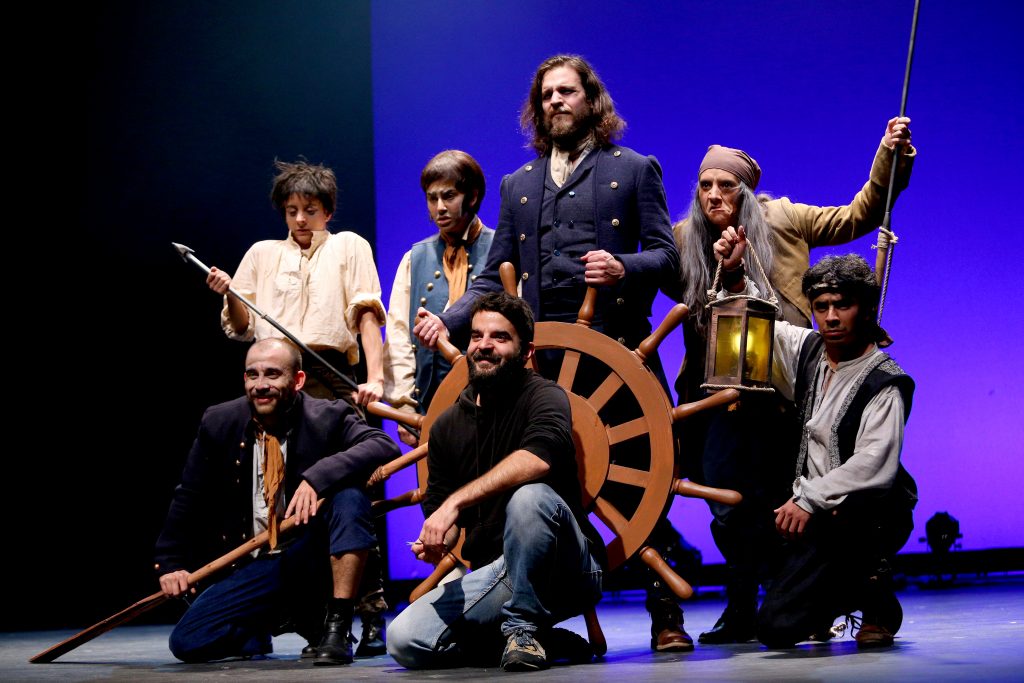