“I imagine the mistery of God as a needle

With sharpness that only a true master can reach, these lines written by Joseph Mallord William Turner (1771-1851), show a sensitivity close to supernatural and we can see it in the sample J.M.Turner: Acuarelas, Tate Collection, from MArch 27 in Centro Cultural La Moneda. For the first time in Chile, this exhibition travels alongside its curator David Blayney Brown, who will have a full agenda where he will give talks and lectures about his work and this exhibition that comprises 50 years of this unique artist.

Sometimes it is incomprehensible to understand how someone could obtain that level of development, and I say it above any consideration or praise. When visiting Watercolors, one immediately feels subjugated by that sublime majesty that has given so much renown to the artist, as will be revealed by the words of his critic and contemporary John Ruskin: “The greatest of his era, the father of modern art ” Turner was also recognized as the forerunner of the Impressionists and Abstract Expressionism. 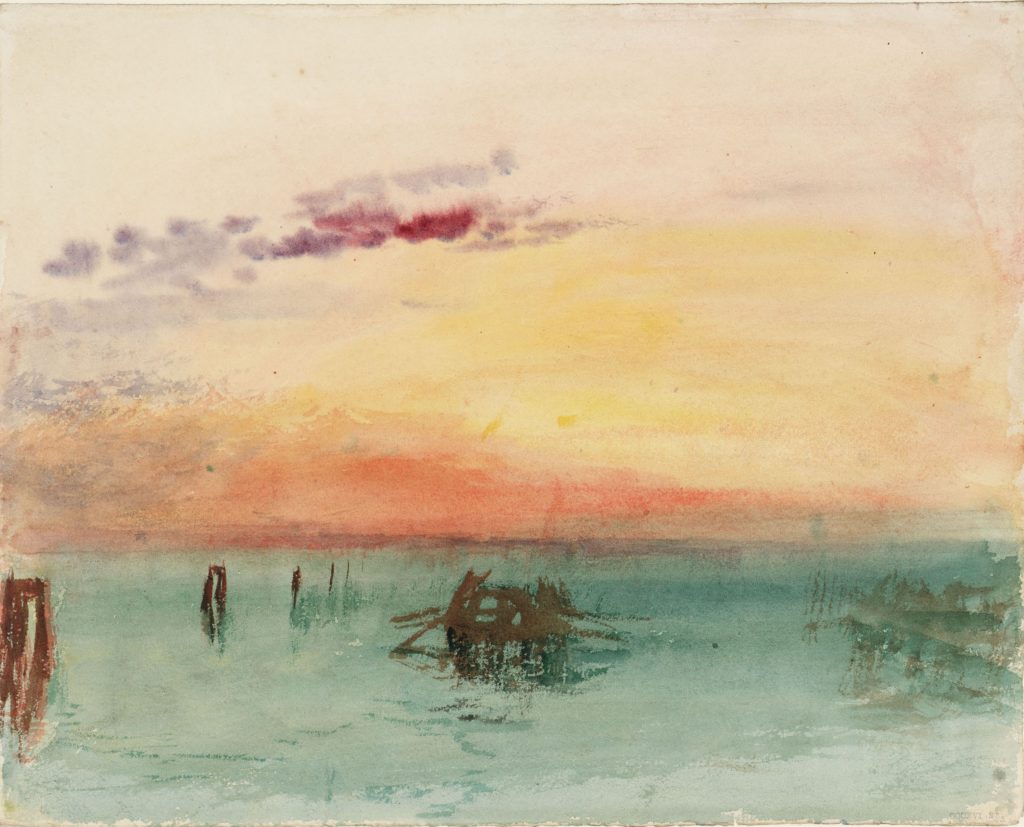 Regarding the sample, something important to highlight is the fact that for reasons of conservation and content the luminosity levels were slightly attenuated, giving the group the ideal aura to further enhance works where light is their guide, but also because delves better in the artist’s introverted temperament. Turner strengthened his personality through a tireless search, something that can be seen in sketches that were not intended to be exhibited and that the artist always assumed would be destroyed upon his departure and, nevertheless, gave rise to works full of originality and that denote a degree of experimentation and boldness difficult to imagine. In an era undermined by the excess of conventionalism, which Turner shied away from, it made watercolor a propitious resource for the gouache to dialogue with the tone of the paper it uses as a background (bodycolour), creating a technique that manifests itself in the artist and his admirers (1827) and Sir Thomas Lawrence’s funeral: sketch of memory (1830), which he then amplifies to later works where he also leaves untreated areas.

Surprising derivations can be recognized in several of the 85 works exhibited here, even in those unfinished that served as a point, to bring to the oil resources of the watercolor, where its technical rigor is manifested in such prosaic details as ripping with the nail layers of paint so that the white of the paper emerges as a revelation, which is complemented by the fact of blurring the mist, creating a dreamlike atmosphere that oscillates magically from darkness to light, as the clouds that crowd like a crowd prove it in Moonlinght over the sea, with distant cliffs (1796-1797) and in ship or ships over the Tamar river: twilight (1811-1814). 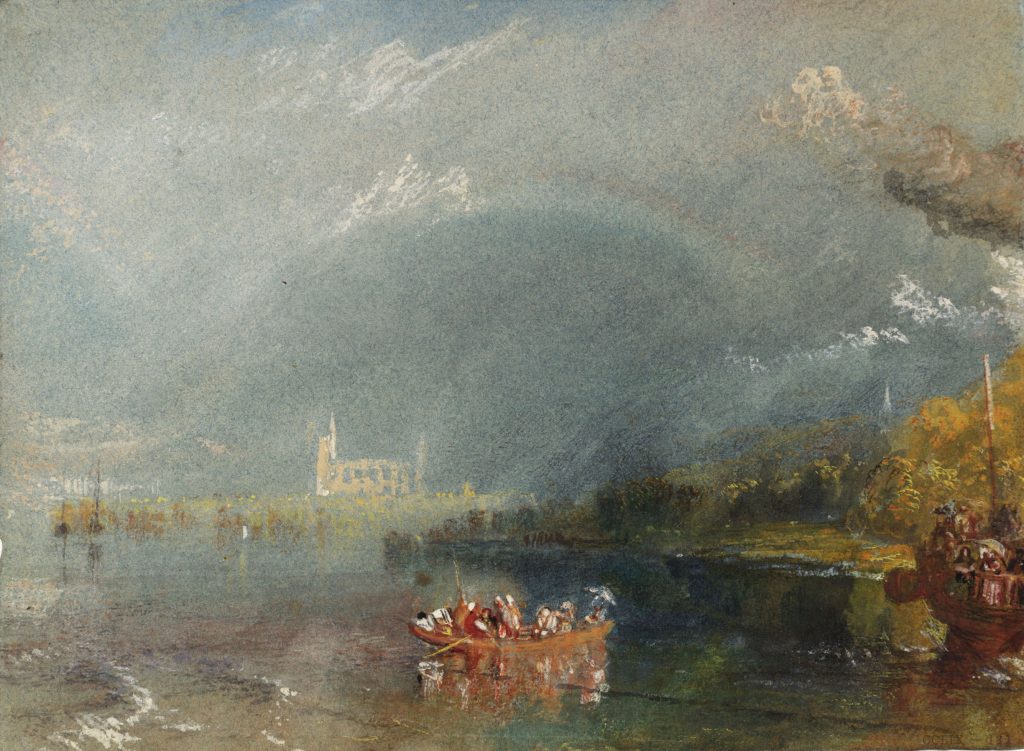 Little by little he insinuates the fickleness of a threatening sky looming over him, and that from 1790 is the hallmark of someone who started in architecture, as seen in the Cathedral of Burham, the interior with sight to the east along the south aisle (1797-1798) and in Diagram 65 of master class, inside a prison (1810), but then seduced by the overflowing force of nature, as seen in the obsessive studies of color such as Richmond, Yorshire (1797-1798) and Norham Castle (1798) in which are recognized glimpses of a synthesis of language that untimely takes shape in A shipwreck probably related to The Lighthouse “Longships, Land’s End (1834) , Harlech Castle (1834-1835) and Bamburgh Castle, Northumberland (1837), initiating a journey to transparency with which it connects in addition to its interior, with a neatly treated exterior in Venice seen through the Laguna in the twilight (1840), Lake Lucerne with the Rigi (1841-1842) and in Ocean and sky (1845) three examples where the abstraction on taking possession, is closer and closer to the essence, which made it affirm: “The weight of light on objects contains the world. It is a powerful lighthouse far from all the coasts we reach “. 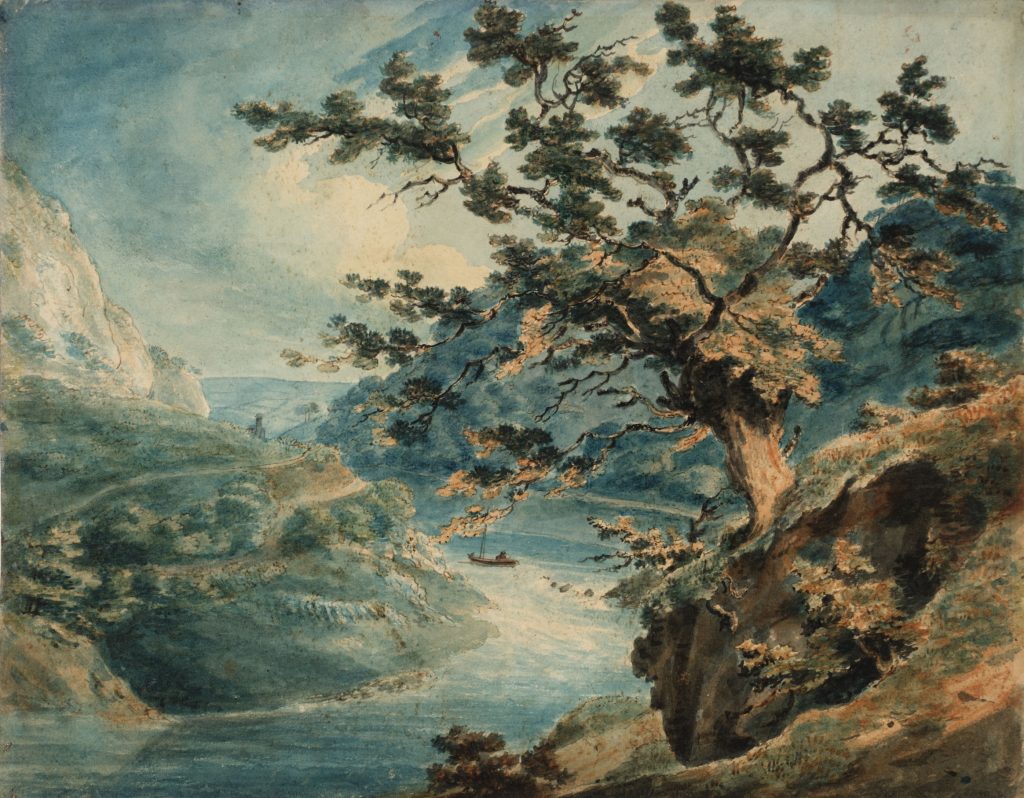 Although the enveloping and ethereal character is not conceived without his academic training at the Royal Academy, where he perfected his architecture studies and his interest in a landscape that he complemented with meticulous “beginnings of color” related to watercolor and from where he assured: “No to have an established process, but to handle the colors until having expressed the ideas of his mind “, deliberations that often ended up in bases of watered down applied at great speed, those that gave him a freshness that he later reflected in his canvases. Now if we add to that the detailed drawings of his expeditions and trips that took him to travel much of Europe, in a journey that made him move from the architectural to the epic, from the pastoral to the historical and the romantic to the naturalistic and picturesque, but above all to have the clarity to distinguish eloquence from nature; the one that is perceived from his earliest work to the latest one, where, seeing the constant struggle of the elements, he strives for the dissolution of the physical plane, giving way to an idealization of the environment, which allowed him to move forward almost two centuries and become in the most influential English artist of his time. Proof of this is that the most important prize of contemporary art awarded by the United Kingdom, bears his name.