In this, his first significant singles, Ignacio Alvaro (Lima, 1983) brings to fruition the projection of a vision condensed of pondered researches -captured in consecutive plastic proposals during his last creative lustrum- towards the cultural substratum of these latitudes, Peru as a geographic referent for autonomy. Thus, the overlaid layers, in first instance evoke an aesthetical glance focused in a juxtaposition of conceptual “layers or temporal veils”, rehearsing the artist -necessarily antagonistic although- luckily complementary perspective. The basis and leitmotiv both of the piece of Alvaro itself and this sample consist in the recreation of historical-cultural sequences, taken back from both Peruvian pre-Columbian past and the researches of the botanical-artistical circles of English R.J. Thornton, and from his coeval the disruptive explorer and scientist A. von Humboldt, European people living in the Illustration era, pioneers and promoters of a romantic approximation to the American lands.

Stresses as a holistic anchor of the artist’s original phase the imposing polyptych “Atlas” (2016) of 14 canvases in oil, world map which mural dominates the Harriman Gallery, visual welcome impacting optically the unnoticed visitor (PHOTOS 09.jpg and / or 10.jpg). In view of veiled non-conceptual character, this work gives a globalizing framework to the immanent idea of ​​the exhibition: the artistic expressions are unquestionably also the product of historical-cultural layers, such the present remnant, a transcript of the physical and mental colonizations that have taken place in America. Latin in general and in Peru in particular over the centuries. In “Atlas” would resonate the recognizable echo of the foundational geographical and humanistic work of Alexander von Humboldt (1769-1859), diligent explorer – together with the French Bonpland – of Venezuela, Cuba, Colombia, Ecuador, Peru Mexico. “I have the crazy idea to represent in one work the entire material universe, everything we know today of the phenomena in the celestial spaces and of life on earth, from the stars in the nebulae to the geography of mosses and gigantic rocks, in a vivid language that will stimulate the imagination.”, from Humboldt’s 1834 letter to K. Varnhagen. Diverging a bit of the systematically conceptual, Alvaro expresses in “Páramo” (PHOTO 22.jpg) and “Amazonas” two works of frank humboldtian inspiration – in acrylic and Chinese ink on celtex and plexiglas – which testimonial glance as a layer extracted from the nineteenth-century past to current time. Thanks to the resource of the vitreous transparency prefiguring a foreground exterior closely intervened, it achieves a correlation with the second plane – the dominant background – without subtracting protagonism, generating a genuine sense of depth before the visual vibration created in the iris of the viewer.

Probably the aesthetic core of the entire sample is the set of 14 paintings of varied format, inspired by the graphic work of the plastic group movement induced by the English physician Robert J. Thornton (1768-1837), a pre-Victorian character who invited contemporary artists to to recreate in engravings the botanical exoticism of the New World. Thus, such a flora – although of a romantic stamp, also of a mercantilist nature – transits by the hand of Alvaro from a British colonial halo to an inspirational source, mutating into stylized multicolored, imaginary and quasi-extraterrestrial plants: they highlight “Auricular Study”, “Study on Water Lilies “,” Study for Jacintos “, and” Study for Renealmia “(all 2018, PHOTOS 14.jpg and 16.jpg), in faithful respect of the original British nomenclature, also in acrylic technique on celtex and plexiglass.

In such a context, a kind of parenthesis in the investigation of the alleged national cultural identity manifests the apparent pre-Columbian patina of the series “Cuchimilcos” (2016, FOTO 25.jpg) – anthropomorphic of Chancay extraction – by artificially turning bodies into aesthetic eagerness to differentiate the subjective from the apparently objective; The artist further explores such a cultural-comparative investigation in the sequence “Huacos / Ghosts” (2018, FOTO 17.jpg), of a careful past / present ceramic recomposition, and vice versa, probably the most complex conceptual item of the entire sample. 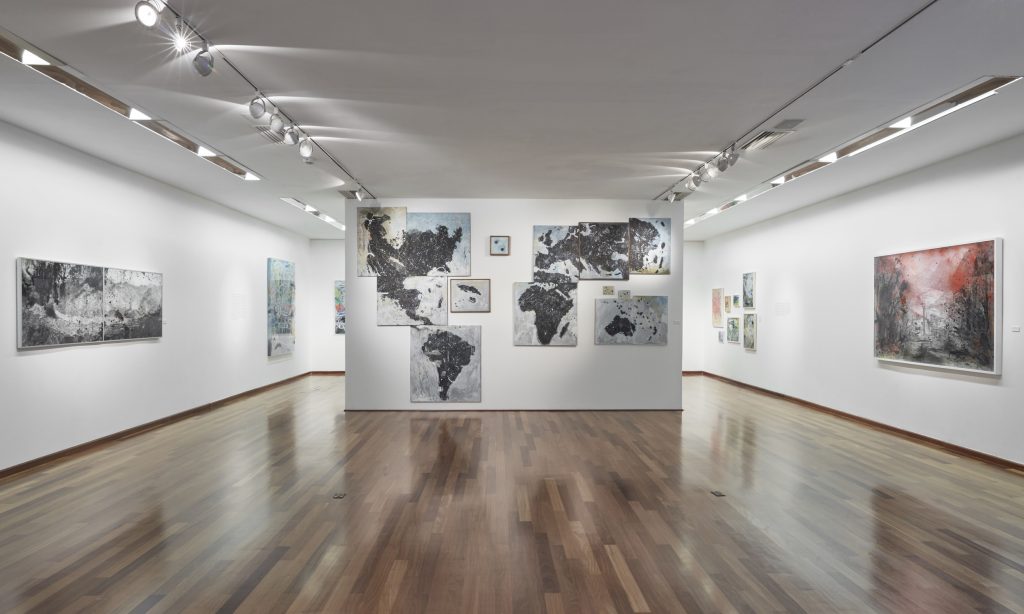 Special merit of the curator Carlos García-Montero, the daring to face the horror vacui of the fence of a hundred linear meters of white walls of the Harriman Gallery, arranging sequentially and balancedly the alvarian opus without clogging surfaces or overloading spaces, such the result of the achieved grouping of the cuchimilcos and ceramios several, as well as the installation of the absolute novum gallery “Jardin Interior” (2019, PHOTOS 03.jpg and 04.jpg), a scaffolding containing – supposed – new plant species, books, ceramics and objects found along the way, as a relational and interactive space.

AAL collection will be exhibited in Peru during Art Lima days