Banksy is one of the most controversial artists of the contemporary art, his work has managed to shock as the content as the shape. Since 80s one of the great situations for the academy was that actions of art were performed out of the walls of galleries and museums, where they can be easily controlled and watched. Bansky literally has “taken” the walls of the city as a support for his images, even though this artist looks for slipping through his streets, is leaving a breadcrumbs trail that only misplaces who follows it.

The copyright is for the police published by Alquimia Ediciones, it is one of those clues. Collect the self-publication Banging your head against a Brick Wall, with a compilation of texts extracted from Wall and piece edited by Penguin Random House. In this book they dialogue very well the images of the works with the artist’s own statements and the feedback of their audience. Its extension, with a little more than 70 pages, gives it a manual aspect, brief and precise, very much like Banksy mixing controversial graphic elements with vindicating texts.

Bansky literally has “taken” the walls of the city as a support for his images.

While Banksy has earned the respect of the art world, he was at the point of being the stone in the shoe. Graffiti does not yet have the easy way to be considered a minor art, after all, it does not aspire to be exhibited in any institution but on the street itself, it is pure secrecy. He goes from being “rejected” to rejecting authority, he becomes rebellious: “The people who really disfigure our neighborhoods are the companies that scribble their immense slogans (…) They expect to be able to shout us their message in the face (…) but never it allows us to answer.”

The police is an important element in his work, because there is no emotion in the graffiti without the paranoia of a persecutor. In the book, Banksy laughs at the police through their same expressions, things like: “Sorry friend, I just do my job”, “If it were up to me, it’s all good, but I have to follow orders” or “No There is no way you can get a word from us to use in the cover of your book “, they are satires in themselves. The title also plays with this idea, the false sense of justice that the law provides. Both editions gathered in this volume (Banging your head and Wall and piece) were published without reserved rights, like the graffiti, this “liberation” of rights threatens the private property sold by capitalism. Moreover, art as well as graffiti does not ensure remuneration for the author, hence the much-used phrase “For love of art”, which for capitalism is simply useles. 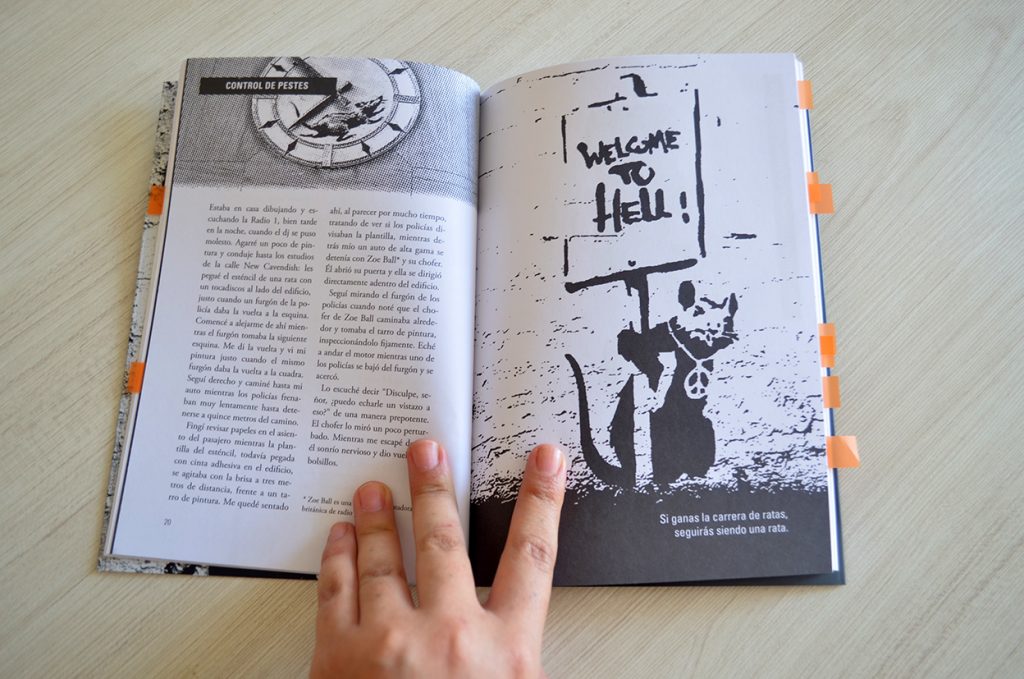 One of the most common criticisms of Banksy is that he is interested in all social struggles, including those that do not affect him because of his privileged position; next to it he has been criticized that his work is repetitive. From its beginnings anarchists works with the denunciation of violence, discrimination, capitalism, power, etc. While the message changes, the “trick” is the same. This multiplicity of complaints can speak of a hyper-connected individual, who is affected by their environment and global problems or by a group of organized anarchists. The whole myth about Banksy’s identity is very relevant, because he plays with this duality of being a public character without a face.

Like Aldous Huxley with 1984, Banksy is aware that in this very dark landscape, the only thing that can be asked for is a bit of humanity:

“It is a bit embarrassing to have been imbued with the human problem for a lifetime and realize at the end that one has nothing more to offer than the phrase: Try to be a little kinder”

The book highlights this decisive phrase in one of its lapels, as if all the manifesto of the artist were summarized in these words: “I am frustrated by several things but trying to be accepted by the art world is not one of them”. Then he auctioned one of his works at Sotheby’s just so that it self-destroys after being sold for US $ 1.3 million, the character laughs at us again without a smile.