This exhibition gathers pieces that requested a praxis of aesthetic opening. Every artist was led to a deep, reflexive, revealing creative process, where they could see themselves in Otra (other in Spanish) which required problematize the same epistemic and hermeneutic maps of reality, adding further tension to the individual parameter of creation.

In that launching outward, there was a leap into the seemingly unknown, a flight of self-discovery. This action of displacement was going through layers of mutual understanding, where that Other, slowly stopped being someone external. Each advance towards her was a step inside each artist. Carrying himself to meet himself, in the encounter with Other.

Therefore, the works present here are immersed in a desire to go beyond the domain of the craft and / or artistic discipline of each, to surrender to the uncertainty of experimentation with materialities emanated by a different subjectivity, granting the work the transforming power of (self) consciousness on the outside, where the external reality submerged and crystallized in Other, was covered by a quick liquid of consciousness. Like looking at the bias, the work of art, here, is configured as a submarine periscope, which mirrors, from the oceanic depth, the own route in the outside world.

Miryam Olguín: My other selves. The author works from the memory of the maternal image with two central elements belonging to her mother (RIP), a purse and a pearl necklace. These mnemic objects are hung in the center between two tall mirrors that invite the viewer to settle in the middle of the reflections, to recognize themselves in them.

Virginia Maluk: Meeting point. Maluk creates with two Others, one who lives and works in the field, and the second, a Syrian refugee. Both from distant points, come to be aesthetically, after this plastic process. In the insistent xylographic exercise of portraying them, the artist observes / finding herself ancestrally, opening an affirmation for the peace manifested in her work.

Ana Hans: Angelito. This work is worked from the memory of a newborn being, sister of the author, who lived 13 days. She installs on a white surface objects and documents that account for the brief material existence of his sister, and how these objects can be ritually extended as a connection with the deaths themselves. This installation wants to connect the viewer with the duels themselves.

Edith Cortez: 4/43. His work presents 12 photographic images digitally intervened of naked busts (without faces) of Others that interrogate the bodily ideals imposed on the female sex. They figure the encounter and the acceptance of the body, reflecting the mythical meaning of the breasts. The digital intervention of the photographs was made in conjunction with each portrayed. On the side is a notebook with comments from those portrayed around the experience.

Carolina Encina: Adopted love. Encina paints from conversations with a woman raised from a very young age in a children’s home. What at first seems distant and distant, then presents itself as a key to the self-understanding of a living biography, as if observing the life of Another, could enter into hidden places of one’s own. In this work the Other intervenes directly to color with his desire to forget and recreate life.

Eliana Escobar: I am the same, the one, of the dance, of the mirror. Escobar works with torture and exile as a theme, and his other is a woman who, having lived through these raw experiences, gets up and finds her inner place of calm and joy. Images-signs that being hard for the memory are worked with the delicacy of those who embrace the past curatively. It is a tribute to human resilience, to the will to live and rebuild from the creation.

In the Black Room is, Other Captore with her work: No one will believe you. These images emerge from the story of the daughter of a torturer, who was systematically abused by her father until the interior tear. This stark dimension of reality is shunned and rejected, here it is exhibited, from the strength and personal power of standing before breakage and silencing, with the certainty of ending the impunity of these crimes and activating the symbolic execution in art. The artist takes her image in figuration by placing her mona in the foreground, as a protective magician.

Patricia Lagos: Between life and death. Lagos creates from a therapeutic plastic relationship with two Others. One with a serious medical diagnosis, an irregularity growing inside her brain, and the second with a dramatic story of marital separation. The first one, after all this artistic work has had a great recovery and the second one, manages to release so much psychic material stuck in the memories.

Monica Tapia: Lilith. Tapia works the biography of the trans poet, from three mannequins, who are giving account of the evolutionary process of that Other. The installation of the body as a dummy indicates questions about the paradigms and stigmas around the meat, and critically interrogates the plasticization of a forced life to which the biomedical parameters, which rise ideologically, impose themselves as healthy and normal truths.

Completing the curatorial tour is the artist Andrea Flores de piedra with her work: Estado Primigenio. The sculptor works the archetypal image of Another deep, who inhabits and pulsates silently and perhaps unconsciously in many “others”. It is an Other vegetable source, which transcends the ego, powerful and eternal, available to be activated through acts of consciousness. It rises materially from an expansive metal structure built in the same exhibition space, which points to a fractal geometry of existence, hidden in the mystery of the vegetable and animal kingdom, represented both by leaves, and by an electro-acoustic audio created to from some sound world of nature.

The exhibition included the audiovisual participation of Marcos Nath, who made documentary record and procedural fragments of creation with each artist.

The exhibition, in its development takes a deep sense, that led each artist to surrender to this encounter. Even beyond that concrete Other of his work, the encounter with the collective. It can be noted that there is a persistence in the theme of “death” and the transcendence of it in the most diverse aspects. This point synchronizes and spontaneously articulates the works, as a vortex of life.

Bora thought to make this sample under the title: “Other” in the opening of its meaning. From here, the issue of women and women are strongly manifested, rising as a field of knowledge, and overflowing the limits and biomedical social assumptions that operate as control mechanisms. With all this creative process new realities are generated, in different directions and dimensions, insisting on death as another way of life. The body as sign material, the etheric bodies, the lightness, the poetry and the regenerative force are imposed symbolically to affirm and polish the decision to live creating.

Note: Within the sample, you will find a small tribute in honor of a former member of the group, who died surprisingly less than a month ago: Isabel Margarita Yelpo (R.I.P.), to whom all the light emanating from this transforming process is directed. 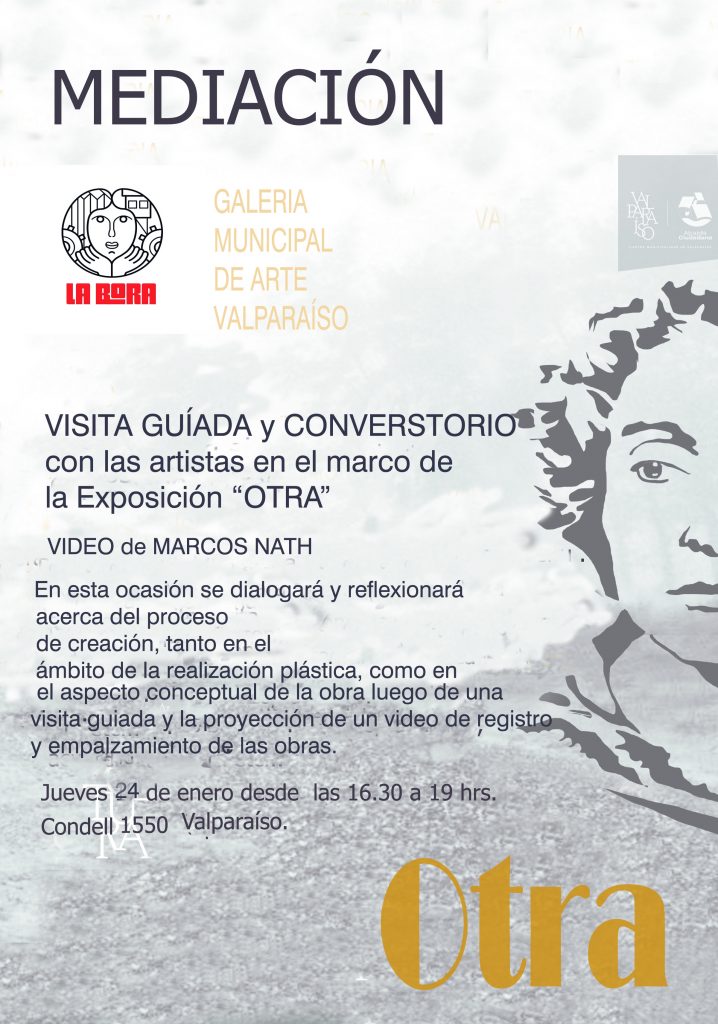