The work that is exhibited at Teatro nacional Chileno with a single price of CLP2,000 and several free shows is of strong content. There is a huge amount of anger that is merged with pain. The reasons of anger are presented from the very first scene, when Brian is recorded with a swastika in his chest. The rest is the loss of the homeland, a poem adapted to ask Santiago burns, that had a thousand March 27th, 327 Brians and time to sing Placebo or Shakira.

Diego Ramírez wrote the poem “Brian, the name of my country in Flames” in 2008, published in Moda y Pueblo. The text is incendiary and has references to the Villa France and the murder of the brothers Vergara Toledo. It was re-edited and expanded for publication by Ceibo in 2015.

The work is exhibited just steps away from La Moneda until December 22th. 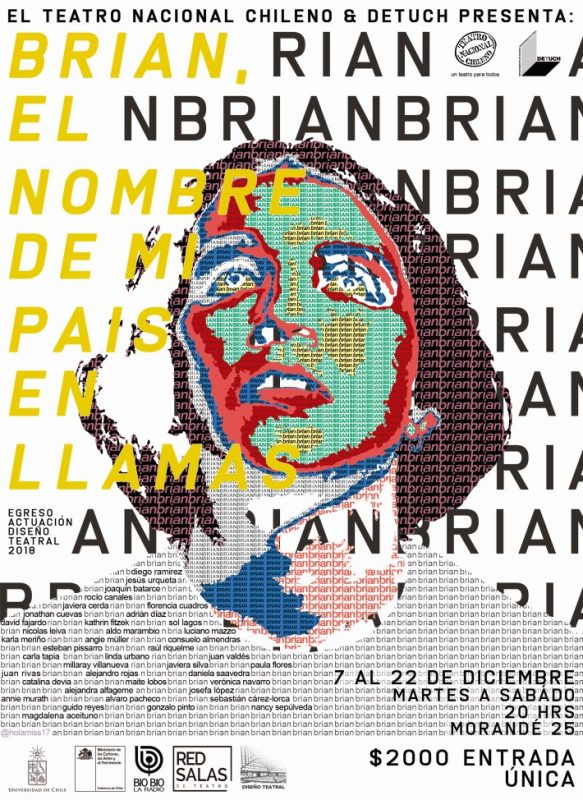 The grandeur of the first scene

When we see theater, we assume that what happens on stage is fictitious. This is why the impotence generated by the opening sequence of this work is surprising. The lyrical speaker of the poem-A young man-recites this kind of requiem. Enter Brian, young and thin, walks the night until some hooded figures assault him. The cellphone, the slippers. More hooded in. The jacket. Enter a peel with boots. You do not need to bear the emblem of Nazism to be recognized. He makes gestures of apologizing to Brian, offers him a beer. Then he takes the beer can to the crotch and forces Brian to drink. They hit him, they strip him. Take his knife and mark his victory with the blood of the young homosexual. He draws a crimson swastika on Brian’s chest. Few people in the audience can look directly at the horror that happens on stage. Brian on the floor, the name of my country on fire.

This is the topic that goes through the work. Brian is a victim of violence. Of neo-Nazis, of former lovers, of militant companions, of a neoliberal system that they blame of their name as poor, of an abusive stepfather. And on the other side of the coin a lover who resists tears and unleashes his anger in an inflammatory speech as a Molotov bomb.

“Our generation preferred to write with clean hands

Not to wake up with a National Socialist poem

Drawn with blood on the chest

Of an abandoned and hot boy, 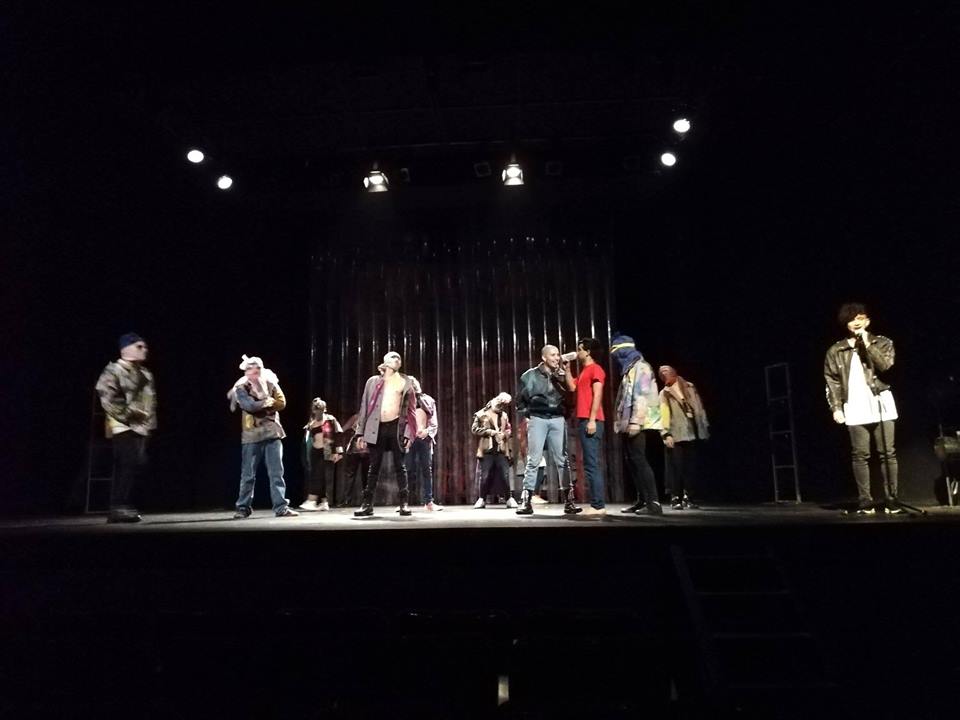 Brian, you are not Brian Molko

Brian Kisses in the Disco women’s room. In this painting Brian, the same Brian, is a lesbian who takes advantage of the hygienic privacy of the toilets to give themselves to a passionate love. A conversation of young people who are barely old enough to enter those places where they ask for identity cards. Sparks of happiness accomplice. The work uses this resource to change the genre of the protagonist and his mistress so as not to be locked into gay love and to encompass a wider spectrum of sexual diversity. It confuses for a second and then works perfectly. They will alternate several times during the function.

“Long after an orgiastic moment happens, where the naked corporeality of women and men are intermingled. Faces covered, bodies not”

Brian likes to listen to Shakira. There is a hooded one that walks around the stage singing the songs of the first albums of the Colombian artist. Ramirez said that writing the poem built the image of Brian thinking that he could military and listen to Shakira without feeling that that was a contradiction. These are moments of relaxation that relieves the emotional burden.

-I can’t, I’m not allowed to enter, Brian says.

They go. On the wall of the disc is read “Die of Love” and there is a light that never goes out of the Smiths. It is the curse of the lover who survives to Brian, not to die with the skinny, to remain between the impotence and the rage of a country sown of Zamudios. Another striped says “fashion and people”, the drama looks at the original text. Turn up the music. The hooded men come in and dance a choreography together. Long after an orgiastic moment happens, where the naked corporeality of women and men are intermingled. Faces covered, bodies not. But of sexual has little. It is a violent atmosphere and there are too many struggles between lovers.

“His singing is like an agony, a farewell kiss or waking up feeling the emptiness in the other side of the bed”

Someone erases a blackboard and writes “My Sweet Prince”, then discusses it with Brian. It takes a while for someone else to take the electric guitar and mark the first chords of the Placebo song that the blackboard refers to. The lyrical speaker comes back and says “Brian, you’re not Brian Molko.” Brian is poor and Latin, worse, poor and Chilean. Brian suffers all his life discrimination of being a low-class homosexual with tastes that look to Europe and the scope of name with the vocalist of Placebo is a key among lovers, a posthumous memory that will return to hear the song over and over again. The hooded goes from singing Shakira to intoning sadly the “You’re the One” (you are the only one) of the chorus of My sweet Prince. His singing is like an agony, a farewell kiss or waking up feeling the emptiness on the other side of the bed.

You never are going to be alone

Brian the name of my country in flames is poignant, romantic, adolescent, tragic, testimonial and survivor. They have a structure that changes Brian’s face several times, showing the amount of hate crimes that have been committed. Evidence that Brian is one of the most popular names in the country and for some is a brand, a stigma of poverty. Brian 327 times. Brian interpreted by the exit of students of Theatre of the University of Chile under the direction of Jesus Urqueta.

The structure of the drama is fragmented and in a parallel way we see the surviving lover and Brian smiling after a kiss. It is different from Alex Anwandter‘s film based on the Zamudio case, you never are going to be alone, where half of the plot is before the attack against the protagonist and the second part of the film is about the father who must face that his son beat him for being homosexual. Here the pain is a constant rage that invites to fight, to live with the forehead in high.

“Brian,
You no longer exist
You disappear
And everyone,
Everyone is looking for you
Not me
I don’t want you to disappear
I want you to be the permanent absence un my love story.”

When the room almost full darkens at the end of the work, the graduates take the applause to position themselves in front of the announcement of tariff hike of the humanist area of the University of Chile. “No to the precarization of culture and philosophy” says the canvas that unfold, which is answered with more applause by the audience. Cheers for support. The question is whether the tariff hike of 9% in philosophy is due to a price increase in Plato’s books.  Would the Council of Rectors applaud?