“… and suddenly the sunrise” is not one of those films just to watch it, its temporality corresponds more to the viewing, just like what we would experience when watching a painting or reading a book. It is a trip where its main character is far from creating new memories, by contrast, it appeals to the recovery of his own past, his memory. In middle of the beautiful stages of the south of our country, the charismatic characters tell an emotive story that is built on flashbacks, little by little the viewer is going into experiences and traditions of this little town at the end of the world.

The new film by Silvio Caiozzi (14 years after the premiere of “Cachimba”) had an ambitious production where the locations correspond to several sites on the Big Island of Chiloé and Tongoy, where the fictitious people were built from Mingas to move the Old houses. The screenplay was co-written by Jaime Casas, which gives it the literary character and reminds another of his films, “Coronación” of the novel by José Donoso.

The story begins with the return of Pancho Veloso (Julio Jung) to his homeland, being a writer of entertainment articles that seeks to write a series of chronicles about the town and its inhabitants. To do this, he tries to regain contact with his childhood friends, since it is they who can fill the gaps that his memory does not recover. At first, we can see the pressure exerted on him by his wife and the publisher of the publication, with calls that slowly decay as the stay of Veloso progresses in Chiloé, until finally disappear. At the same time, the saleable stories he planned to write are transformed into chapters of a novel about his life, his friends become characters and he, an artist. 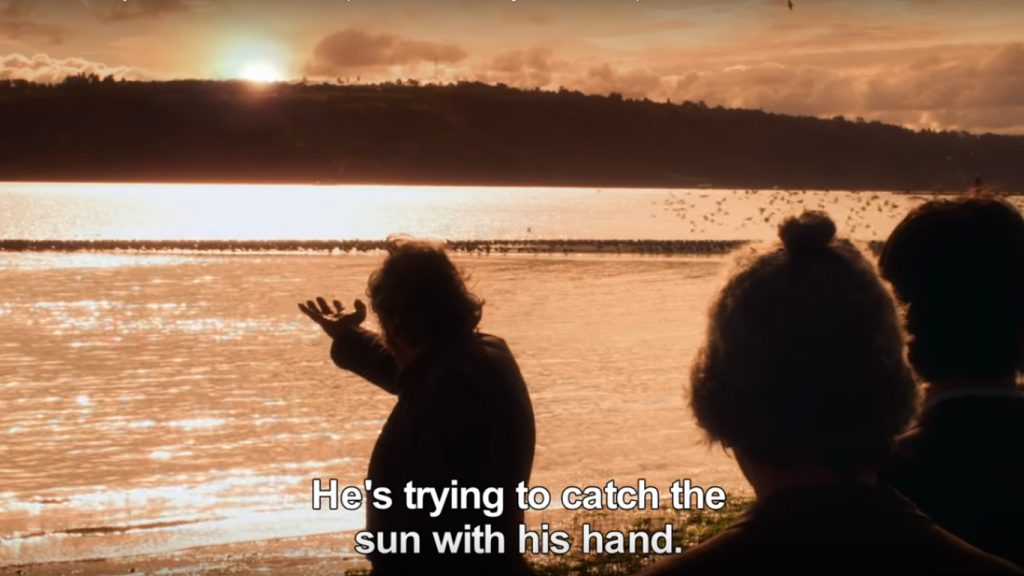 Veloso manages to contact his friend Miguel (Sergio Hernández) who at first looks at him with some insecurity, as if he did not believe all that is his old friend the Penguin (the nickname of Veloso for his flat foot). At this point we see the contrast between the two men, the one coming from the capital loaded with technology in contrast with the one that keeps its simplicity. The character of Miguel brings humour and relaxation in the most serious moments of the plot and is reluctant to memories, but it is also who guides Veloso in his journey.

The film constantly references “The Odyssey” of Ulysses, reaching out to compare the protagonist with the Greek hero for his departure and the 40 years he took to return. In his childhood, who read this book and acted for the entertainment of the town was Luciano (Pablo Schawrz), one of the most outstanding characters in history due to its theatrical character and delicately represent the silent homosexuality of the time. In the present, Luciano (Arnaldo Berríos), is suffering from a diabetes that immobilizes and prevents him from dancing, so it is isolated from the town and is dedicated to talk to the dead because if they speak, they still exist. He is the one who advises Veloso to travel to the Isle of the dead to honor his memories.

Luciano is the least active of the three elders and it is a constant reminder that time is valuable and that memory must be preserved. The film works the idea of time, even in its impressive duration of 195 min. The constant coming and going of the timeline contrasts images of the children, youth and old age of the characters, while the poetic narration reflects around the recovery of the lost time of old age. Because death does not wait for anyone, as we can see throughout the narrative.

Death is another of the main axes of the plot, because Pancho is the son of the town’s gravedigger. Since very small relates to these rituals to help his father (with whom he has a difficult relationship) and is from this office is that he discovers his ability to write, so that in his youth ends up dealing with the creation of epitaphs for the deceased and is acknowledged in the town as the poet of the dead.

It is at this moment of his youth that the first signs of the political polarization of our country begin to be seen between the decades of 60 and 70. The same Veloso without being a militant, begins to become aware of the inequality, the control, and the abuse of power of the armed forces. It lives directly because the rival in his love story is a military and, although the film is not a political apology, uses this unavoidable antecedent that ends up affecting the lives of the characters and the fracture as well as the memory of our country.

The film has been recognized with awards as important as best film at the Montreal film Festival and is currently in full career as a candidate for the issue No. 91 of the Academy Awards for Best non-English speaking film.

La Corrupta, from the circus to heaven