The Argentinian artists and engraver Héctor Saunier, Director of Ateliar Contrepoint of Paris, who will carry on the Atelier 17 founded by the engraving master S.w. Hayter, creator of the simultaneous technic; together with Shu LinChen and Emma Saunier, presented “Atelier Contrepoint de Paris” in the Cárcova Museum and in Brilla Cordelia of Buenos Aires, with a pedagogic activity.

How did you start in art?

HS: I left architecture and started taking Color theory lessons and painting abstract paintings with Héctor Cartier, very influence by the school of Chicago. In a complex political context, I put my efforts in going to take classes in Europe.

What happened in Paris?

HS: I arrived in July 1961 at the house of Julio Le Parc and coincided with Alicia Peñalba, whom I had crossed in the University city, where I went to Hayter’s Atelier where Picasso, Miró, Dalí, Chagall, Rothko, Ernst, De Kooning had gone. , Pollock and many others, and I stayed a year, according to England and two years later I returned. Around 1965 I started working there on Sundays. I owed him so much that I was forced to be his assistant when he asked me, so, I was his right arm and his associate. When he died, I thought that the workshop would not last without him, however thirty years ago we continue to receive people from all over the world, another historical characteristic of the workshop.

The engraving caught you…

HS:It was not the engraving itself, but “that” workshop, where recording was like painting. Since 1973 I painted at night in my room because time was scarce, I dreamed of painting and recording at the same time, and in the workshop because of the color systems that we still use, it is still like painting for me.

SLCH: She was a painter at the Taiwanese School of Arts and some colleagues worked in France with Hayter and Saunier, so I went to paint, too, and I liked the recording experience. I learned the techniques, I was Hector’s assistant and life invited me to stay forever.

How your artwork is defined?

HS: The motivation is mysterious, indefinable. The vocation of the artists differs between one and the other. The technique is not the important thing, it is a means that excites the imagination, between you and the result of an action. In our workshop, Contrapunto, there are different artists, some of them based on a theme, idea or dream. Personally, I am close to Hayter’s way of working in terms of the flow of the unconscious, but I do not use automatism. I like to go without knowing where, and that not knowing where one goes with the line, inspires and discovers the image, which comes out more from the hand than from the head.

SLCH: My work connects with everyday life. I capture the moment, a place, the nature and culture of the country where I am and I express it from color and pigments.

SLCH: It is involved in the line, I am inspired by Chinese characters, in the time it takes the stroke of the brush, like the burin.

HS: The painted line is an inward line, towards you. The one you make with the chisel pulls it out, it’s submerged, you look for it and you do not know where it’s going. The straight line does not belong to nature, it exists in human nature as intention and direction. Time and line are involved in the image. In the engraving, it works the other way around, it is the image of the mirror, past and future are not the same. If you pull a line, usually clockwise, from left to right, because you cannot backward, the spiral is not the same on the plate as in the mirror, the one you generate closes, and in the mirror can be opened, this is vital and it is linked to what Shu Lin says. If you look at an image in front of a mirror, it seems the same, but seen from one side it seems to be stopped and from the other, there is an opening. Unlike drawing and painting that are static, we have achieved dynamism with engraving.

What happen during the engraving?

There is sophistication and metamorphosis. The painting is direct, you put colors and already, but in the engraving, the color that is on the table is not the one that will be printed, it will be transformed by the interaction of oil, rollers and paper. Because a drawing is printed, a painting differs in its shape and color.

How do you handle the viscocity of ink?

At the time when these methods were developed, the engraving was of “sweet” size, ink rubbed on the engraving. There already existed screen printing, lithography …, Hayter wanted to free black and white engraving looking to create surface color, which comes after engraving carving and is the structure that directs everything. In that area of ​​color surface so important for us, we enter and modify it with templates or accessories. The viscosity makes the adhesion or not between them and the oil. If you pass a clean roller over a color, you “raise” it, it was discovered that if you passed a large roller with a lot of tangent and touched a relief with a lot of oil, you could put another color that was rejected by that oil. Hayter said “we spent fifteen years to discover it and it was so simple …!”

Do you use ecological engraving?
We don’t, they are a consequence of American hysteria, impatience does not make them suitable for engraving, they put very strong acids. The methods of the classic engravers are not harmful, to greater smoothness and slowness of procedure, better results. Some apply benzine, turpentine, substances with emanations. We use non-harmful methods, diluted acid, kerosene (the one used in heating and it is greasy), without generating toxic vapors. As for the ink, I’ve been using direct offset for sixty years, I’ve never had any problems.

How do the Paint rollers have a bearing in the printing?
A hard paint roller touches the relief of the plates, if there are vibrations, ripples, you can exaggerate them with it. IF it is soft, it will enter the gaps. Before, gelatine was used, cheap in France, that’s why I think it was taken from the market (laughs).

What are your molds made of?
In our copper and zinc workshop, we achieved a wide range with them. Linoleum, wood, steel and aluminum can be used but they need stronger acids and the result is less intense. Zinc is softer, allows for sharp contrasts and a more pictorial result, but it is not achieved with the degree of purity of yesteryear, it is mixed with Titanium. You cannot make a burin in Zinc, it escapes, while the agreement between the copper and the burin is very interesting. Copper is harder but at the same time more refined and graphic. In aquatints and dry ink, the zinc does not resist many runs, it is weak to the pressure of the press and rubbing. Therefore, the copies of a series began to be numbered. We have everything so standardized that often the last copies are better than the first ones.

What are you books about?

HS: I made eight folding books with Robert Marteau, he sent me his poems and sonnets usually about animals, and I created prints based on what inspired me. Sometimes, we did the other way around. One was called El Toro, another Entre las nubes, Siete plumas para un gallo would be for our daughter, Emma who was small and I proposed that she draw it.SLCH Marteau was delighted with the Chinese culture, he gave me a sort of musical poems and we made the book Las Ranitas.

How was to attend thirteen years to Hayter like?
He did not want to teach, he believed that the conditions for learning were natural, he wanted you to discover your way. As he was much older than me, he assisted him in preparing his engravings and he had more time to paint. Print, stamp, it’s a job, and you get help. So, I do now, I take a person from the workshop to help me while he learns.

Anything bright upon the sheet of paper?
Initially the pictures were for the Church, that’s why many paper formats were named as the colombe (the dove), Jesus, le soleil (the sun). You can print on any paper and decide what risks to run, one of 180 gr could pass the color of the reverse.

What is the creative pedagogy about to whom attend three months to “Contrepoint”?

We give a conditioned space so that “something” happens to them in the workshop, it is a personal experience, the interesting thing is the variation and the uniqueness. We also approach this experience when we travel to expose, we usually give courses in Universities and workshops.

How do you perceive the creative freedom through generations?
Emma is already different from us in her expression, studied at the Royal Academy of Fine Arts in Brussels, makes ceramics, installations, oriental painting, Sumi-e, and although she makes prints, she uses black and white on Japanese paper. Times change, there are more and less revolutionary moments, attitudes that facilitate the new and turns to the classic, but better to change. 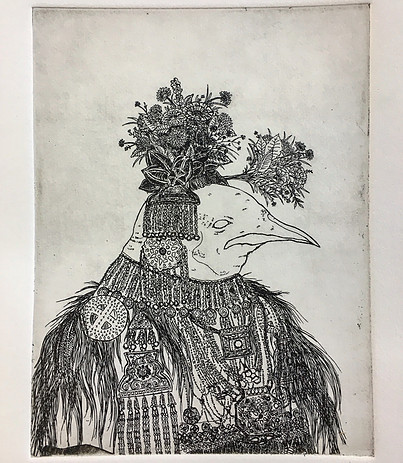 Shu Lin Chen was born in Taiwan in 1967 and studied art in Taipei. Since 1995, at the Atelier Contrepoint continuator of the famous Atelier 17 in Paris, he incorporates the freedom of the spontaneous stroke and the cantilevered lines of the Hayter technique to his quality as a colourist and the poetic dynamism characteristic of his work. He has made personal exhibitions in personal exhibitions in France, Taiwan, Chile, Italy and Belgium, teaches at international collective universities, events related to graphic art, Biennials, Salons and Festivals. His works are in collections from North America, Peru, Argentina, Taiwan, Malaysia, Japan, Hong Kong, Sweden, Italy, Norway, France and Russia.

Emma Sauniere: Daughter of Hector Sauniere and Shu Lin Chen, she studied at the Royal Academy of Art in Brussels. It develops its own universe, both in black and white engraving on Japanese paper, and in ceramics and installations. Exhibits in Paris, Tokyo, Japan, Italy, Switzerland, Brussels, Belgium and Argentina.