Rocío Hormazábal spent her first years in the USA, where she would go to ballet classes. In her early childhood she didn’t care about being fat, it was something without importance. Later it did care, in fact now she introduced herself as a visual artist, photographer, fat model, that’s why its calendar 2019 is called Chica XXXXXL. Here is where she gets apart from model like Antonia Larraín, mentioned a lot by her advertising campaign and by being victim of ciberbulling (“are you the fat model?”). Rocío considers that XL models of the advertising are almost skinny, almost normal, and they tend to continue the rule that lays down in “chubby phobia”. @rocio.usaperlas is not willing to hide because of her weight nor to remove her intervention against femicide, although special forces’ cars be on her.

Still a girl, her family returned to Chile, to San Bernardo. Of its passage by the school it emphasizes the first times in which its weight was motive of ridicules and its first confrontation to the censorship of one of its works.

-I was in a religious school in the middle, mixed but religious, there, for example, once had to make a mailbox for the day of friendship, all courses were sent letters and each course had its mailbox and had to do an original mailbox and I say “why do not we make a toilet? Let’s make a toilet “because it turns out that the water is where one is alone, concentrates, I gave a whole sense. I was 14 years old, and my classmates turned up, the group decided that we had to do it, we had a nice bath and next to the pluvium toilet there was a review of why we thought the bathroom was a sacred place. Well, they sent for me, they sent me to pray, they destroyed the mailbox. They never understood, they said that I threw the friendship for the toilet, and obvious: to mass. I did it very instinctively, then I understood that it was a censorship, they punished me. They made me feel bad because they have the guile, they have the capacity to make you believe, it is almost sectarian. 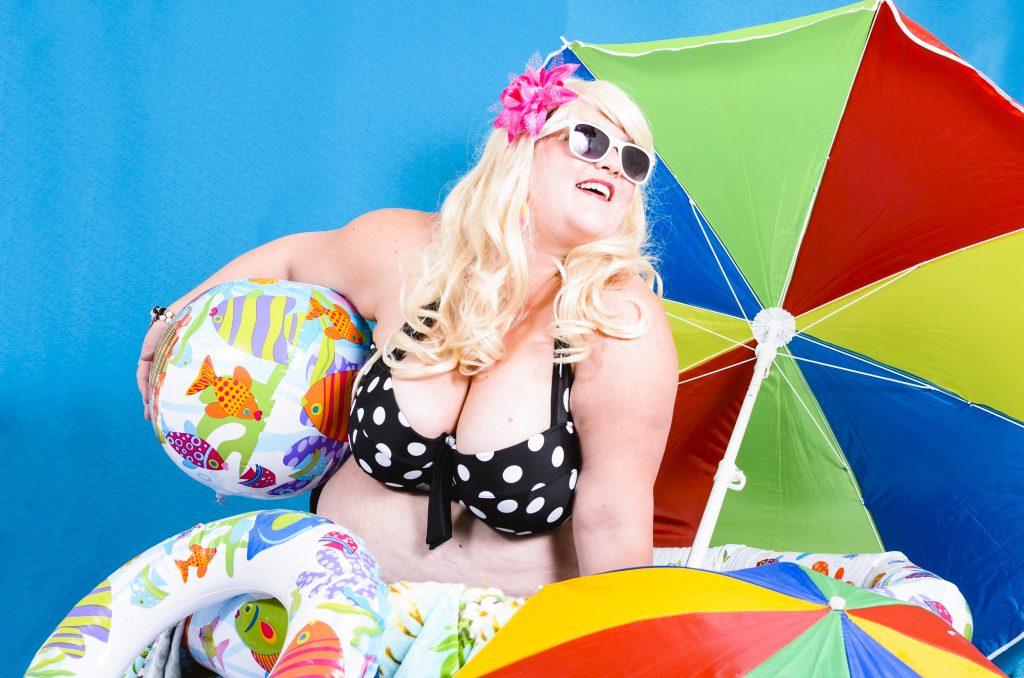 After that episode, her mother suggested that she change schools, which led to her entering an artistic college dependent on the University of Chile, where the mention in visual arts led her to photography. The tour was San Bernardo, the Heroes, Juan Gómez Millas and back to San Bernardo, where he still lives with his family. “My house is a crazy house, an artists house, there are several musicians. There is a rehearsal room. My house is full of artistic stimuli. My brother is a commercial announcer, my dad plays guitar. ” He got used to sleeping and reading in the mics. He studied in the period of the transition from analog to digital image “there I learned to use the mouse, I did not have a computer, I had to go to stay with a cousin to do the work”. He likes the romantic of similar portraits, but the immediacy of the digital image seduces her.

Parallel to his studies in photography at the University of Chile, there is a change that little by little caught his taste: they asked him to pose.

“It happened to me a very moving thing and I felt a little bit sassy of making that performance, a girl’s mom appeared that had been dead by femicide”

I did a workshop in Balmaceda 1215 that is now Balmaceda Arte Joven, a theater workshop with an actor who invited me afterwards to be with his company and I spent 9 years with that company, while I was studying. There I learned street theater, staging, characters, and that was complemented by the stage of the university where apart from the technique they demand an artistic discourse of their own, in 2003 I began to discover characters like Miss Pelarco, who is one of my characters most known. The oldest I have too. There I learned to complement the theater with photography. Also there they began to ask me to pose, I had a lot of iron at the beginning, I did not want the photos to be seen by anyone but the teacher, but little by little I let go. I saw a niche where I could be both in front of the camera and behind and said I’m going to use it, what I have more at hand is myself, and this is something that is repeated so far: work with what I have at hand, then I started to pose for me, I started doing self-portraits and that’s how this Miss Pelarco is born, who is a virtual character.

Miss Pelarco was born because she wanted to make a character that started more or less from the absurd, that made a cultural social criticism to the stereotype of women. He took the beauty contest of Pelarco as a point of reference because it is the most remembered of the passage of Raquel Argandoña by the mayor of that town. He called the attention that the contest was organized in a place that is “field, mud and pigs.” With a fake crown he sealed the character that won this fake contest where an XL candidate triumphs. At that time there was no talk of chubby phobia, but criticism pointed to the normative direction of beauty contests. Rocío endows Miss Pelarco with innocence and confines her to live on the internet, although in photos the miss appears to interact with real life. First it was a web page, then it responded through a Fotolog, later there was a blog and a Facebook account. There are people who follow her years ago and do not know her real name, they simply call her Miss Pelarco.

Not all people like to see a XL model posing with same leeway as a “normal” one.

-I receive insults like chubby feminazi!, look at the fat one!, those things you will always receive them because people do not remain silent, can not resist the impulse to say something to the bare, or to the gutter, the fair, the black , the girl, etc. That aggression will always be there.

“That sexist old man that can’t remain silent came out, the feminist that doesn’t know that is feminist came out”

Feels that Chile is a country that has a lot of anger, which became a bit hypocritical product of disillusions linked, first, to the aggressions of the dictatorship and then to that happiness came halfway. For Rocío Hormazábal the Chilean is very hurt, he needs to throw that rage out, insult the other. 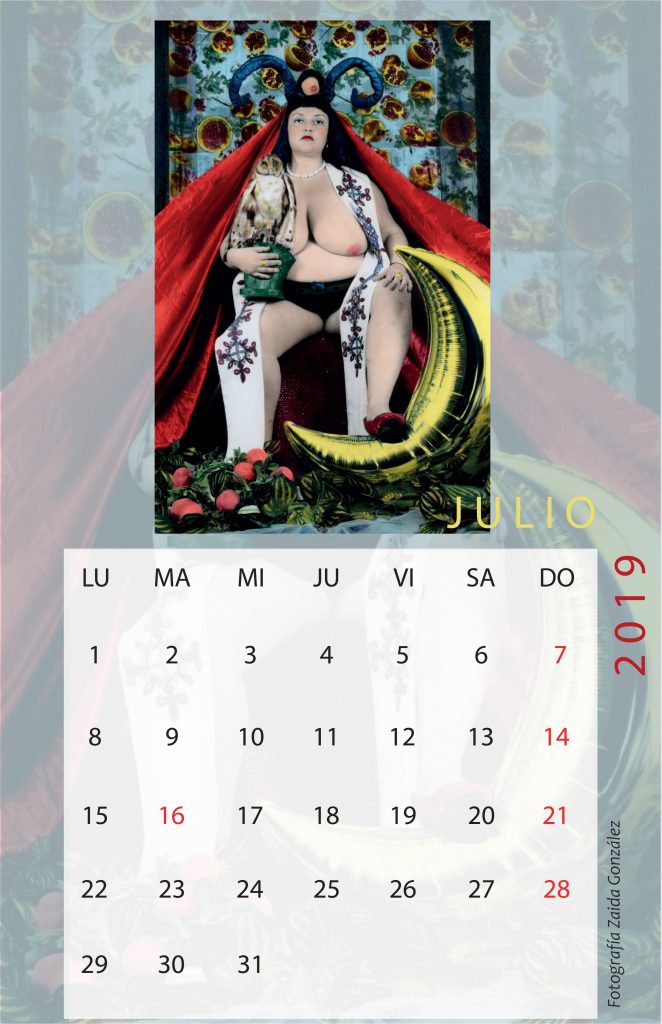 After college he did different jobs, but “it was not his time”. In 2014 he returned with La vida bajo el agua, in 2015 he made All inclusive and Verano Naranja, which in 2016 completed the Vacaciones proporcionales trilogy. All inclusive, for example, is an ironic name that plays with the vacation packages of advertising, since it really is a series of photos of the “all-inclusive” stay of Rocío’s mother in a hospital.

So, in your adulthood, You have not made sober works, Do you?

– Such a difficult question let’s start with the positive. Yes, I like to be scandalous, I do like to be noticed. Generally, the fat has to go unnoticed, the fat should not show-ironically speaking-the roll, cellulite, stretch marks. And I say no, yes there are rolls, people see me and know that there are rolls. Then why am I going to be hiding. No, not in any way. I’m not sober, I must be noticed. I went through a stage where the fat woman had to hide, adolescence, the university, and in my work I want to notice, it is colorful, they always have everyday elements that are not conventionally seen in art, I mix many things, theater, performances, videos with cellphone, everything.

“Children come closer, they ask, I answer, but the responsible adult takes the assignment”

And for all my companions is perhaps Rocio’s recent work with less irony. There are garish colors, toys, intervention of the urban, but it is in pursuit of a serious theme, femicide.

– This performance is a reference to the artist Elina Chauvet, who makes this intervention of red shoes placed outside of La Moneda as a tribute or animita to women fallen by femicide, I quote this very openly, very concretely, and I say, “I’m going to do the same but with Barbie shoes “. Because I’m going to do it in an intimate space, I’m going to put them on the floor too and I’m going to put the name and age, not how they died. This performance is made with the deaths that go through the year, I update thanks to the information of the network of violence against women, they have a pdf where all the information comes out. With colorful shoes because they call the attention to children, if we want to make a change, make sexism fall, we must start with the youngest, because it is cultural, imagine I grew up thinking that there were sexist things that were super normal. Then, I said “now, with this I’m going to love the children”. The children approach, they ask, I answer, but the task is taken by the responsible adult, who has to explain what this is about. When I do performances, I know more or less what can happen, but sometimes something totally happens. It happened to me that I had to pull out of the cops with my shoes here in Portugal with the Alameda, I was with my nephew too, it was a march of No more violence against women and a cop started screaming to get me out, to get me out, another cop went and aggressive told me that I had to leave, they thought I was selling. Many people have scolded me, someone told me “and you are standing in the middle of Paseo Ahumada!” And he scolded me and challenged me, and the same people said to him “hey, find out what she is talking about a cultural thing of the country”.

How did you receive that performance?

-A dialogue was provoked among the people, the old sexist man who cannot remain silent came out, the feminist who does not know that she is feminist but defends the position came out. In Cordoba I did the shoes but with Argentine women, instead of putting the shoes myself, I invited them to put a pair of shoes on someone. It was a playful invitation but when making the gesture of choosing a pair of shoes for a 12-year-old girl it was like a tribute, like putting candles to the virgin. I went with the shoes ordered on a tray and told them “this is a tribute to the women fallen for femicide, you would like to put a pair of shoes in their name” and of course they opened their eyes and looked for the perfect shoe. I did it again in Chile for a sit-in in Plaza Italia, Ximena Riffo invited me to go to the sit-in and do some demonstration, I went with the shoes of Y for all my classmates and he passed me a question that was very moving and that I felt a bit patty to do that performance, a mom appeared of a girl who had been killed by femicide, there the world stopped me, I did not know what to do, I got nervous, she started talking to me, and she told the other woman who accompanied her “just the shoes that she liked” and the lady’s voice breaks, she starts crying. I did not know that I could reach so much. Suddenly I do not measure what I am doing, I always do it with the best intentions, but I did not know that I could meet a mother, who also appreciated the gesture, that I remembered her.