Guillermo Núñez’s work is cruel. It is cruel because it shows the inhumane of humans; it expresses torture and it demonstrates through a hanging body from the thighs and testicles, which once were electrocuted. It is cruel, but it was not always like that, his first works were covered with colors, dreams and mouths with tongue out… as in an autobiography, Guillermo’s creations are marked for what he has lived. And now, after 31 years of his return to Chile, his work takes a different path.

Stand up.
Astonished.
White.
White in front of white.

He writes in artists’ books that generate without rest. It is no longer engraving or painting his focus, actually, it is in the creation of drawings, lines, spots, elements that he uses to create middle and small format works. All of this is because he spent years studying zed Buddhism. 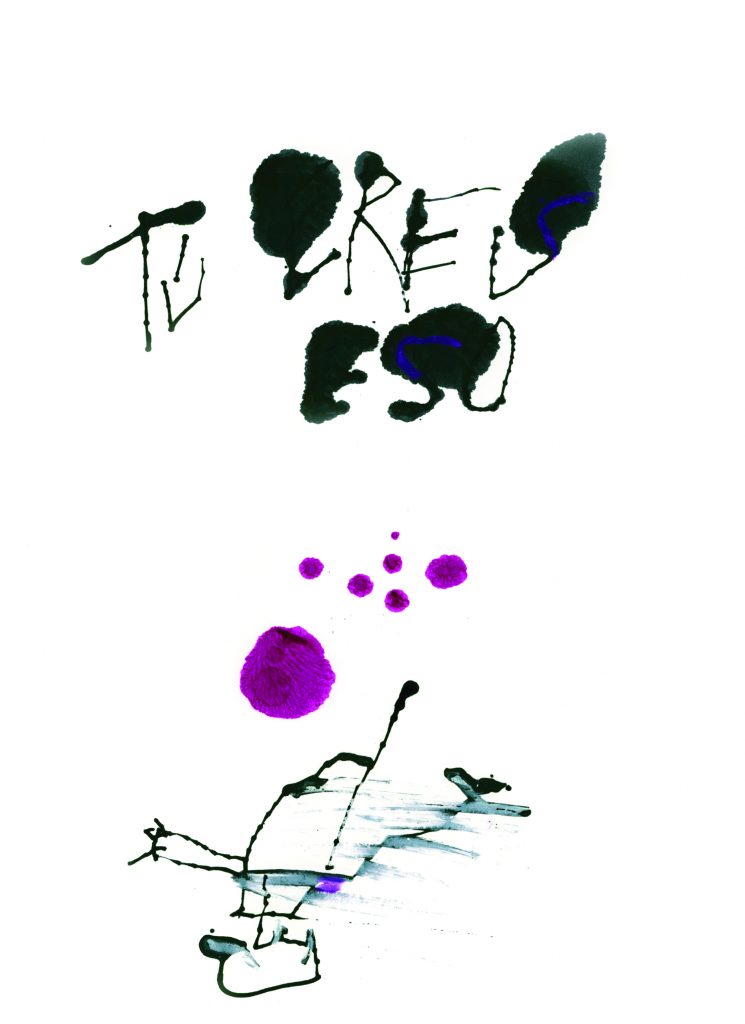 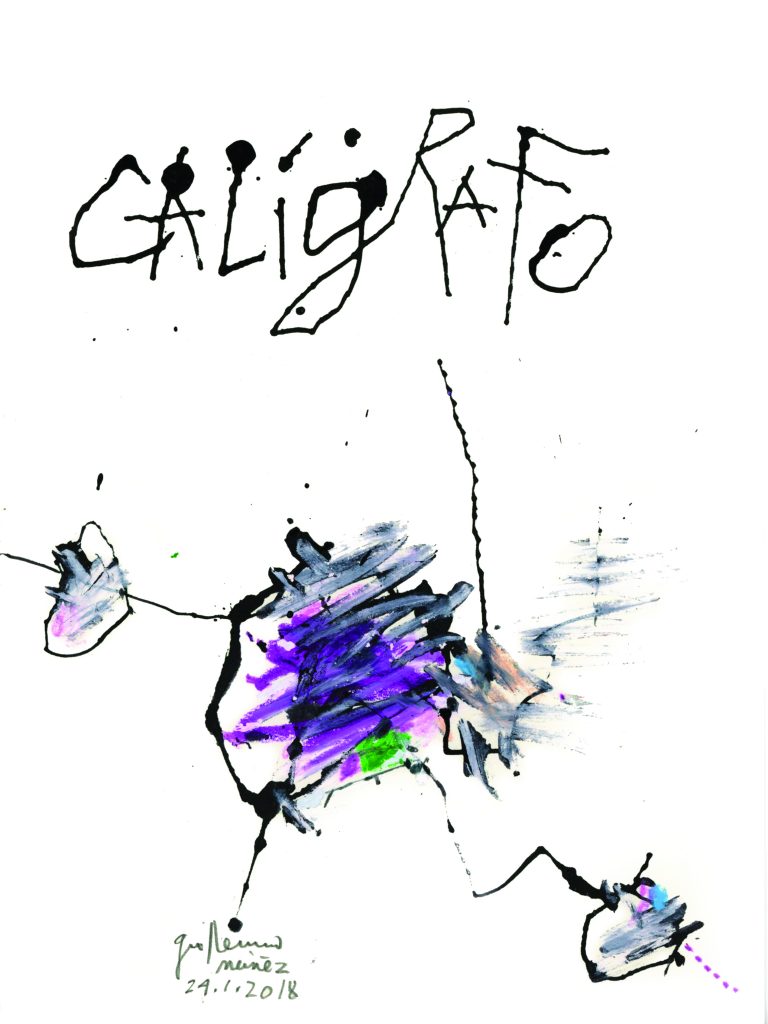 What can we write about Guillermo Núñez? If he writes what he thinks, creates and fells. Maybe, the best way (or only way) is to reflect about his texts, accompanying subtly so nothing keeps anonymity. In a captivating reflection, he describes “white paper is a space to conquer, to dominate. Drawings is world’s breathing, its energy. A burning God.” It is a creation of a way to break silence or to join it; it is a manifestation of existence and space appropriation. Also, drawing is a way to show reality or to kill what is real through a pen. However, these creations involved paint, to choose. There is where all become more complex in a white paper, and everything that join it continuously, without breaking, without be able (or at least try) to disappear. The artist writes “the spot is an explosion born inside the heart. It is an expandable galaxy. Drop by drop. The spot.”

“Can we manage the joy of color, paint pain and human misery; show its perfidy, its cruelty?” he says in the text. Then, this drawings born from terror, they remember horror, to scream its rejection…” just to keep saying: “… do we need beauty, even though this cannot flourish without ugliness, horror, hate, violence and injustice.” There is where black needs white, where the whole cannot exist without the void. Where we reiterate oriental thoughts related with complementary opposites; ideas that said again and again in the Mapuche imaginary about white and black, as colors that represent light (withe) and darkness (black). This, undeniably, makes us to remember torture does not end in 1990; it still exists nowadays, in Chile, Latin America and the whole world, but it seems to forget constantly in support of a superfluous world.

What Guillermo has reflected through Zen Buddhism, of a calm and in harmony life, are also clear reflections related to a life that happened in the middle of the 20th century, he was born in the elected government of Carlos Ibáñez del Campo, and one year after the Black Friday in United States (of course, Guillermo’s life also was affected by the American power); he grew up without television, without women were able to vote, and he lived, with the passion of the 20th century, the faith of Cuban Revolution, Communism, he lived in a world more fair for those who belong to the working class. Then, he was able to see the reality, or rather, he stop seeing reality through with a bandage in his eyes for 23, 5 hours a day. When he was in captivity (are ideological principles a justification for torturing and killing?). Then, he lived like a good warrior of the 20th century, something that will mark the rest of his life, the exile. And his return, consolation prizes because the state failed with him, with his life and family. However, he is here, in Chile, the country that betrayed him because there is something that seems to attract people to their homeland. I do not know if it is for their customs, their origin or family. A lot of people just want to come back. 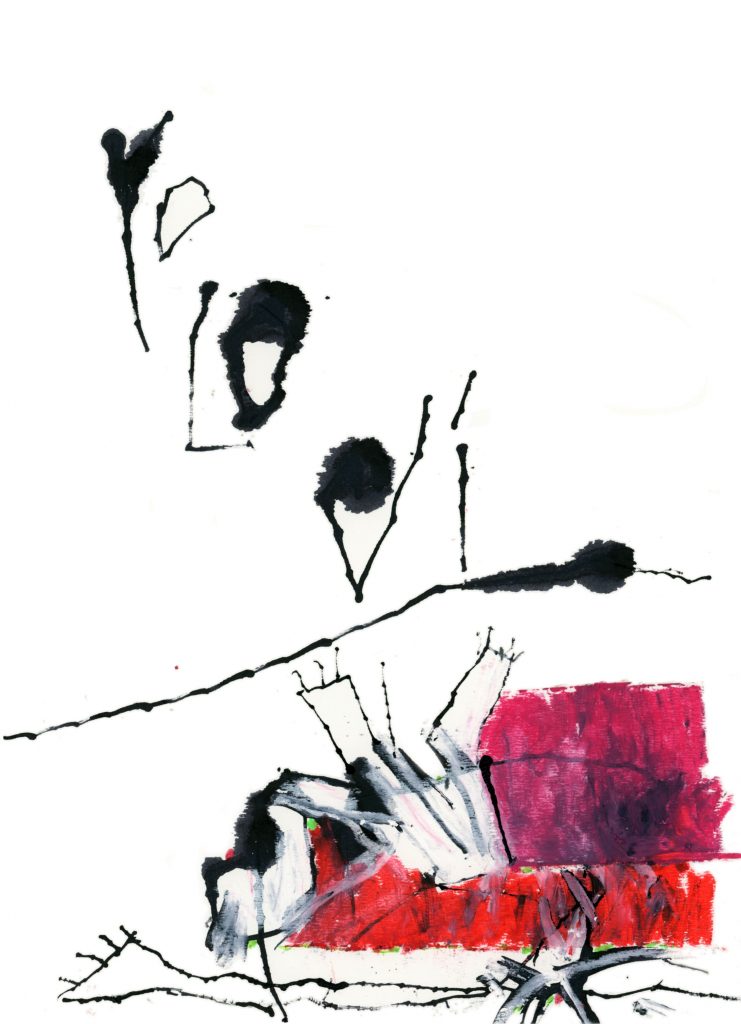 “I constantly wonder why, for what reason do I paint?  Why are there so many people just like me, since always, that are forced to transform their bustled life into colors and frozen shapes? What paradise do we long for?” He writes… and he does not write only in his books, but also in his works there are descriptive phrases about life (his life) such as: “The astonishment, the astonishment, the astonishment,” “drawing in air, the Air,” “touching with our eyes the invisible” and “what do clouds draw?”

“Hands, eyes, minds, which one really paint? What is the freedom of gesture? Maybe, is it my brain, is it fate or is it my hand that draws? In any case, I will have to correct, order,  give structure, language to that impulse,” he explains and adds “drawings, my drawings, sometimes paintings, they are not a correlate of texts, they are not illustrations of texts. It is necessary to read, also, drawings are a language.” Reading poetry of life by seeing lights in the opera and the theater set. Reading is an essential part of a forgotten knowledge, but do pre-Colombian cultures read? If they do, they read the best messages from the gods, hallucinations and extrasensory communication. Just like that, human has always read, but nowadays surveys show that we do not know how to read, grown people do not know how to read, and reading comprehension is worsening, what happened with that instinct that since children leads us to read the world?  Guillermo Núñez, in his studio, has a draw made by his granddaughter before she started school. It is a free creation, spontaneous, pure instinct. Behind that draw, there is a figurative and realistic fruits painted with tempera. It is his granddaughter’s draw, after she enters to the school. Can we do an educational, social, cultural critic from a draw? 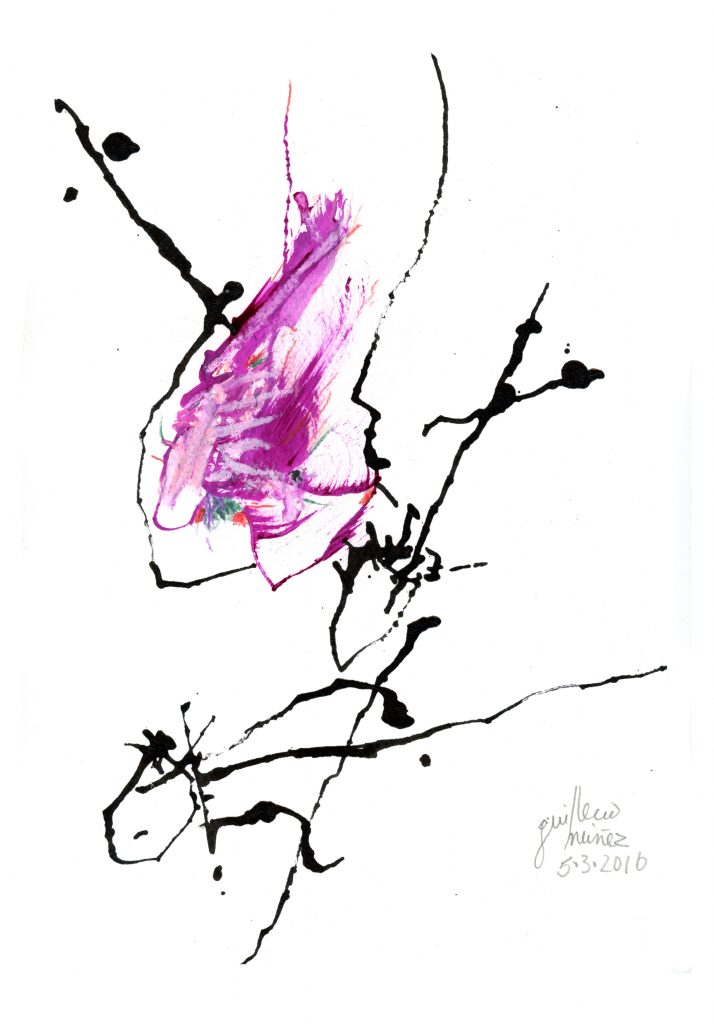 “Convert fate into a headstrong gesture, a duel, a combat. An invocation, a way to attract an exiled energy, makes it real. Possess it and let it go.”

The Japanese, the Chinese.

Encourage the unfinished of drawing:

Let the spectator complete the painting.

Let emptiness be animated for those who contemplate it

and let it be its own vision, its mind.

Not all is cruelty

It is also his beautiful work, beautiful according to different definitions from the History of Art, the Aesthetic. It is beautiful for the fact that gives knowledge about possible worlds; lives in those worlds that aesthetic experience deranged by the present moment; creates with depth, reflection, purpose and acceptable researches; it was beautiful during the avant-garde, modernity and postmodernism. It is beautiful because it has insatiable curiosities and because it is coherent, meticulous and inexhaustible.

Intense conversations with his wife, served as literary critics. His Children, a sculptor and a set designer, both are professions that Guillermo Núñez has practiced in his life. He was director of the Art Contemporary Museum in Santiago, during de government of Salvador Allende. He was tortured and exiled during the dictatorship. Then, he came back to Chile with a rose for his father’s grave. He received the National Visual Arts Award and he decided to live far from the cosmopolitan, collapsed and noisy Santiago, but not so far from it.

The garden was designed by Guillermo Núñez, southern lapwings, thrushes, hummingbirds, bees, ants, peumos and birch lived in this garden and he thanks them constantly for existing in his garden. There, is where he has founded peace, which invites him to the silence of the color white, to serenity and to multiple creations that he is still doing without rest, day after day.

He is loyal to his principle until today with the same courage and bravery like in the beginning. Guillermo has rejected awards, exhibitions and everything that damage the environment in order to generate incomes. He is not available to “clean the image” like constantly happen in art.

AAL Collection will be exposed in Los Angeles, California at L.A. Art Show