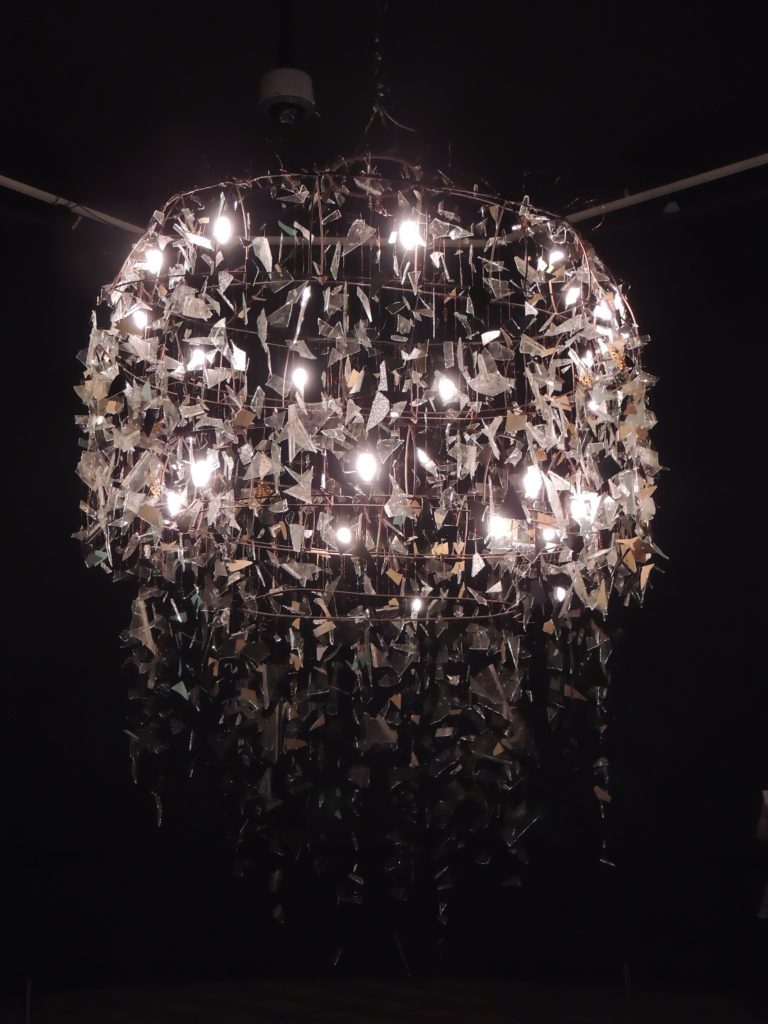 Metalmorfosis is presented as a plastic exercise where metal, adopting uncountable forms, is capable of creating a counterweight coming from an aesthetic feminization, borne as an answer of the prevailing hegemony inside the artistic bubbles. The curator Gloria Cortés Aliaga remarks this is a turning point. “The works of these artists converge in a warning they make to the effects of capitalism and the dynamics of gender dimensions.”

All the above is a cause that manifests a series of proposals crossed by our own making, where being a woman is the cornerstone for expressing feminine corporality, sexuality and even an imminent maternity, projected in works which by themselves surpass their own historical context, creating a corporeal-emotional phenomenology, defining disobedience beforehand, the absolute and fortitude of metal. A tutelary character, which a mention only is enough to carry a bias towards the masculine. However, this unjustified categorization gives in to the ones who know how to bend something more than just the multifaceted nature of metal.

In this manner, Air Classic (2009) and those Nike sneakers, made with coal extracted from the zone of Curanilahue, together with that of Lágrimas Negras (2011), are used as a symbol of the drama and mining exploitation represented by Alejandra Prieto, selected artist to participate in June with Heavy Metal, Women to Watch on Washington D.C., where she will exhibit Pyrite Mirror, following a plastic manner that unites a bastard material with the decadent luxury. Curious alloy which is also inscribed in Dionisio (2017), of Virginia Guilisasti, with another lamp that a tear dropping from a MNBA salon, reminiscence of the ruins of a lost world, dispersed and abandoned. In an offsetting abandonment against sheltering, and Livia Marín surprise us with Soft Toys (2012), a set of second-hand toys, laminated in gold y reconverted in desire to be desired as a shining placebo of the maternal bed. An elusive reality intensified even more by the aura developed by Karen Pazán, and that aluminum boy reminiscent of baby face, referring the Mesoamerican sculptures of Olmec art, setting it up as a Cuerpo Sagrado (2016), lone symbol of the third-world lack of care.

Even when most bring up different aspects of gender roles, there’s a clear interest into stressing the unseen, aftermath of a process of discrimination, violence and inequality that ultimately molds a sculptured body, without distancing of the individual, like in Mina Barroca (2010) of Marcela Bugueiro, and the ruff or neck retort working as a clamp, show in a lapidary way the oppressive machismo that blossoms from the backroom. Resounding figuration that from the factory (both use goldsmiths as reference) is paired with Tírame (2016), name that works as an icon of those marksmen’s or bronze handles, but also some verses of the same Pamela de la Fuente, who states a seductive, but hidden submission, -“I invite you to fuck, all day, all the time.” 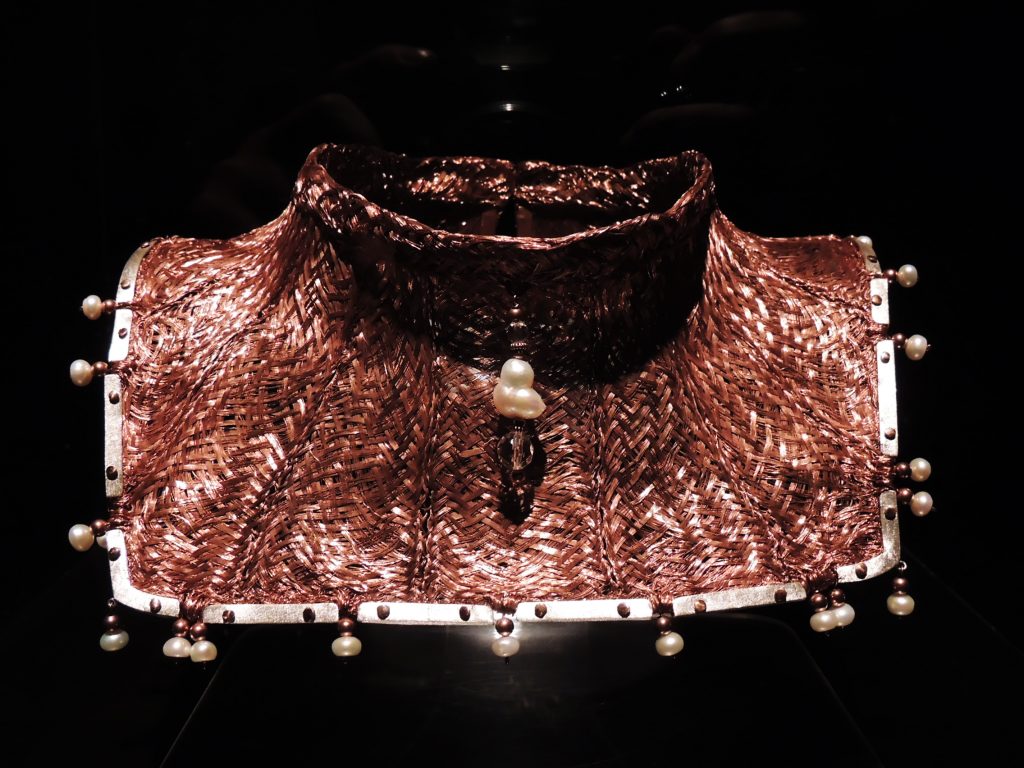 However, the tone of the discourse is not only limited by the physical, but also to the emptiness of the internal face or the soul of the things presented in that Línea Discontinua (2011), installed as insubstantial ornament which Isidora Correa presents the superficiality and consumerism which we are prey of. Like a hidden order, from a different approach Michelle Marie-Letelier, with Like (2015), and copper as the involuntary conductor of how many cybernetic leaks and espionage exist. A metric referent, tangible in the Geografía del acopio (2013) of Amelia Errázuriz, who via 30 modules of copper tries to make us see the prolonged state of defenseless of a battered Latino America. Also, you’ll find contained in Intemperie (2016), that residual inventory made by lost wax and bronze which Rosario Perriello, demonstrates the vulnerability of natural habitat and devastated ecosystems. A lattice of indolent domination tangentially gazes upon a Ana María Lira, woman born in war times (1939), who from a trench made of a material plurality urges us to stop in those Semáforos para meditar (2016-17), lapse that help us look those hooked drawings in copper of Catalina Bauer, who with an accurate visual story makes this Espías del fondo del mar (2016), lost themselves in the vastness of the ocean and the sea, just like a never-ending game. 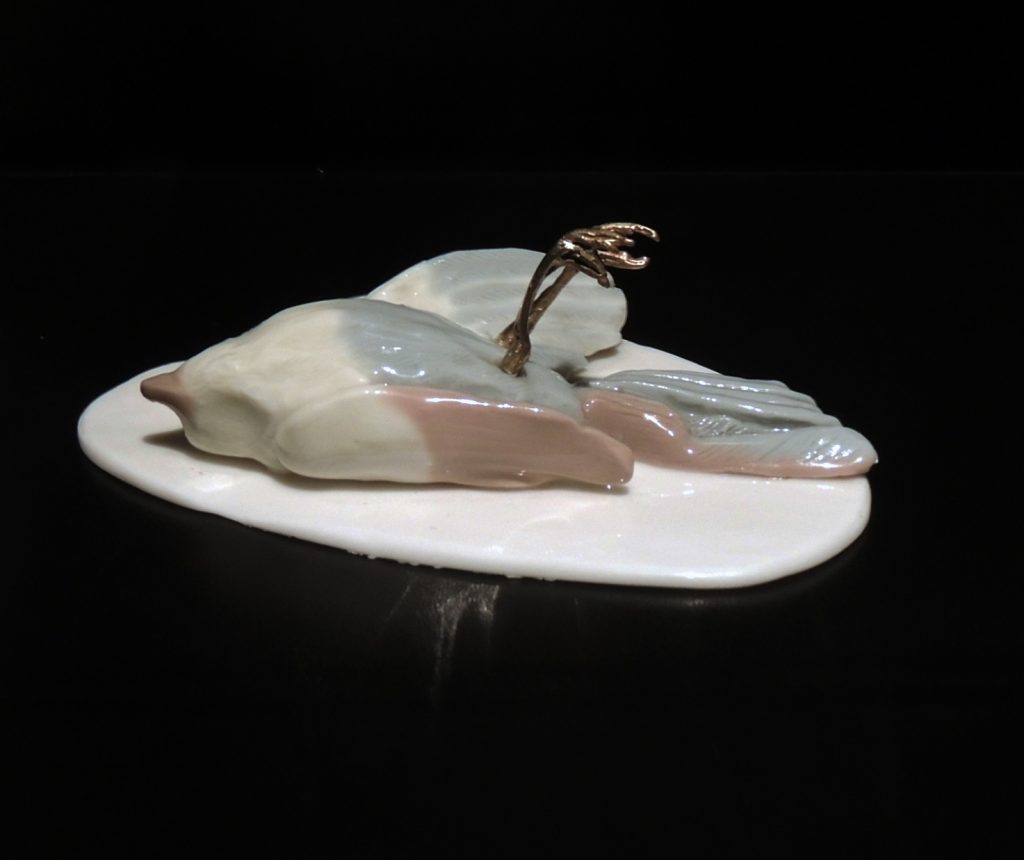 In this sense, Metalmorfosis must be seen as a place of resistance, reconversion and convergence, with projects in the making that speak in a fluctuating and different way, with a gender perspective contrasting twelve artists and a curatorial work searching to uncover the artistic structures, claiming back the endeavors of many women that are still fighting with fortitude and resilience.

Winner of the CCU Art Scholarship exhibits in New York