The work of Maritza Caneca (Brazil 1964) combines what Gaston Bachelard calls the ‘images of the form’ with the ‘images directly from the matter’. Her works help us consider “the material imagination of water is particular kind of imagination (…) we do not bathe twice in the same river, for in the deeps of human beings resides the destination of flowing water.” We are “blistering beings.”

The known phrase of Heraclitus can be used to refer the pools, name that originates from the Greek word, piscis, meaning fish, and since ancient times were used as a way to heal. In the same way, the feelings of immersion and pleasure, transformation or meditation related to water, go down in history and appear on the works of Maritza Caneca, with the aesthetic of the liquidity –Not only in the pools, but also in aquariums and oceans and even in materials like oil- flowing between states of time, between chaos and order, in the biographical and archetypical.

Caneca began the Pool Series in 2012, after a trip to the hacienda of her grandparents where she usually spent her early holidays and the pool was the center of crowded gatherings and a place to relish and play. Coming back after three and a half decades Maritza was struck when she saw (as she narrated) “the state of the house and the pool completely empty and left behind. In this pool, there was only memories and waste left… I realized the void was filling with memories. And what memories those were!” This perception of the spatial void and the flow of memories were so strong she began searching in Brazil the existence of abandoned houses and the heir of a splendid past. “The first thing left unattended were the pools, and paradoxically, these same pools were a sign of power for the past generations.” Little by little she began to turn into the ‘woman of the pools’.

Her camera, far from the classification of pools, began to transform into a device able to encapsulate the memories in the water, or where the water should be, in the transit that carries her between cities. The Pools Series (filled or empty) is an ongoing work, which has helped her break into the contemporary art scene, using pools as a stage –in a resemblance of the Düselldorf School or “Becher class” type. These don’t need the presence of people to present the combination of the private and the collective floating on the surface of water or are projected in the sludge of their floors when empty. Unavoidably, the pools begin to work as a well parapet where the memories are look at as a social mirror of cities. 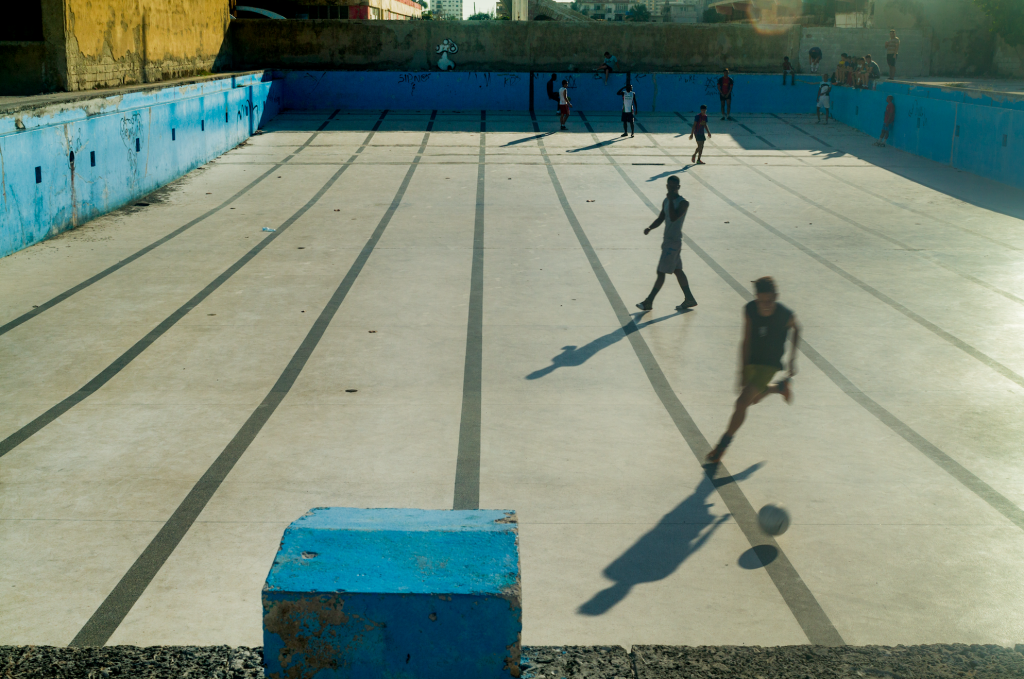 She has taken photographs of full and empty pools in Rio de Janeiro, Sao Paulo, Istanbul and The Habana, Jerusalem and Cartagena, Ginevra, Miami, New York, San Francisco, Los Angeles, San Francisco, Marfa, Nueva Orleans, Boston, Lisboa, Porto, Hanoi, Banbkok and Camboya. And, every photograph can be read as an image in a visual dairy. Not by chance, in a parallel series, she has been taken photographs of undone bedsheets, in different cities in the world. The trails of daily life in the pools are present as the same movement from place to place.

In mid-2014, she visited Cuba with the idea to shot pictures of the pools on the island. She was surprised when she was told the pools were empty, not only because those were symbols of the bourgeois splendor, but because they were expensive to maintain. However, the pools weren’t abandoned; they were adapted to be a playground. In the island, she took photographs of the pools bathed by sunlight, as she usually waits for foggy days for the atmosphere granted by diffuse light.

The water is the element where Caneca captures calligraphies of the moment, a kind of “writing” of liquid forms combined not only with the light of a specific hour but with memories of playing in the water, evanescent as the days go by. Over three long decades, this photography director, that has been in the art world as an author for only six years, studied the teachings of light by Vermeer, Rembrandt, Caravaggio and the rural spaces of Edward Hopper. Her Water Diaries also show invites conversation about art history; e. g. The light that bathes the world in the LA pools painted by David Hockney, but his pools don’t usually have human presences except by exceptionally swimmers, with the delight of the primal element.

If empty pools talk about chaos, the filled pools –captured with the splendor of forms- reign as an order that hopes to last. The illusion of the perfect moment works in different levels: the outside view can work as a sign of cultural system they are part of, strengthened by the titles showing the locations and the architecture of adjacent baths and rooms; but at the same time, the liquidity surrounds the random geometry of the attachments for different uses -Symbols, divisions, ascending and descending forms. In other cases, the filled pools don’t only show the aesthetic delight of the unexpected geometry, but also the feeling of water restoring order, the plenitude of inviting days for immersion.

Maritza Caneca also remembers the physical feeling of submerging into the bottom of the pool and finding herself holding a moment only hers, where the world is silent and there were only her body and the water in the universe. The ascension meant going back to the noise of the world -“I quickly went back to the bottom, into silence, reminiscent of the maternal uterus or the feeling of floating in nothing.” A way to meditate. That is the conception of the video titled ‘Inmersion’ which was shot in slow-motion capturing the feeling of a plenitude of submerging, like someone who drops their anchor in the world. The way her pictures not only invite the memories but stem from it but also the invitation to submerge in the silence of an immersion. Because of this, the curator chose as the last experience the video ‘Oraziao’, shot with images of black oil –that black water- extracted in the ocean, but more importantly, be able to transfer the feelings of an immersion, beyond time and space into the mysterious.

The exposition can be seen in Clima Art Gallery, Miami. Click here for more information.

About the controversial banana of Maurizio Cattelan