At the Galician Center of Contemporary Art (CGAC, due to it Spanish acronym), Antoni Muntadas’ exhibition, Strategies of Displacement will be presented from 17th February to 17th June. 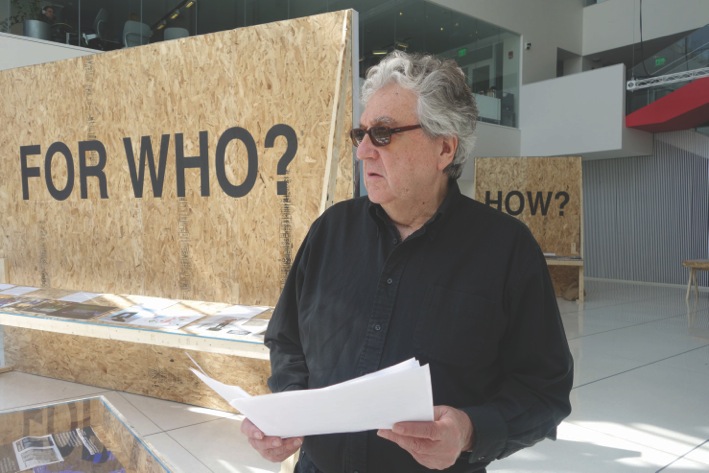 This Spanish artist moved away from painting in the 1970s, moving towards formats such as video or video installation, tools through which he began to elaborate messages based on perception and its link with different contexts, giving great importance to the way in which images give shape to our idea of reality and is reflected in themes such as mass media, territory and social life.

Its passage through Santiago results in an exhibition in which we find pieces from the last two decades presented under the concept of drifting -situationist-. It encourages us to take an undefined path, to flow between atmospheres of a cultural landscape that generates constant stimuli, where territory, translation and movement guide the spectator on a journey that tests his perception.

If I’m not mistaken, he started painting and then into engineering. Why, in this new renaissance of painting that took place in Spain in the 70s and 80s, did you opt for a leap into media art at a time when it was hardly ever seen in our country?

I didn’t go to art school, so I consider everything developed in the 1960s to be a period of training. The production related to painting, is a content that I do not show, but it was what led me to the definitive work that began in the 70s. In 1971 I began to make and exhibit works based on personal experiences that became public, sensory experiences that took shape under the name of activities in relation to what I call “subsentidos” (subsenses). Later on, I will deal with the term Media Landscape, in which I will deal with issues related to the media perspective.

The architecture and the media space become motifs of my interest that are transformed into series like Media Architecture Instalations. Later on, the series On Traslation begins, works on translation -understood from its cultural conception- related to the differences of interpretation linked to the different contexts. My evolution is parallel to the contemporary phenomena that happen in the public space. It is an independent practice that I approach without worrying about what others are developing.

Didn’t have anything to do with living in New York?

The means are instruments just like the brush or the pencil, the geographical space should not be given any importance. However, it should be borne in mind that the definition of my work is related to content and context.

It almost always proposes messages with open ends, inciting reflection and generating critical awareness, such as anthropology. Do you think this is the aim of contemporary creations? Or do you think art is the end in itself?

I believe that art is linked to situations in the world in which we live and I see it as perception and information. I see art from an interdisciplinary point of view and my interest lies in its relationship with social sciences or communication systems. I don’t think it’s something that works autonomously. The place of the overlapping of communication systems, social sciences and art defines my work. On the other hand, leaving the work open in the sense of Umberto Eco is linked to my interest in the problems of interpretation and translation. The phrase: Warning, perception requires involvement: it is a leitmotif, a way of understanding that the more you get involved in something, the more you will understand it. Obviously this understanding depends on the background of each individual.

In Strategies of Displacement, I look at water and movement as a common element in all three pieces, such as getting lost, disappearing or leaving. What else could you add in relation to these pieces?

Strategies of Displacement is part of a triptych that is located in Venice, in the Guadiana and in Finisterre, three very different spaces under the concept of displacement. In these 3 situations I get close to the idea of getting lost, disappearing and leaving. To get lost, I link it to Venice and express it through a recording from a boat at night and drift around. At that time, the city becomes different to the daytime reality. This stereotypical city of palaces and churches is transformed into a phantasmagorical territory that follows the premise of Guy Debord and the situationists in relation to the psychogeography of the city and urban space.

In Guadiana, we attend to a displacement in relation to the concept of disappearing as a metaphor of a river, which goes from areas of great flora to desert territories, passing through spaces intervened by the hand of man such as reservoirs and marshes. In this case, Paul Virilio’s phrases accompany me.

In Finisterre, I advocate a gaze fixed on infinity, on the horizon. Somehow it transports you to the idea of leaving which, sometimes, implies a certain return. The 3 types of displacement join the works that the curator Alicia Chillida has chosen. Double Exposure, Situations, Miedo/Jauf Fear/Miedo, Media Sites – Media Monuments: Buenos Aires or LA Siesta/The Nap, are compositions that complete the idea of displacement.

In his works Fear/Miedo and Miedo/Jauf he addresses the issue of displacement linked to the concept of borders at critical points. Do you understand fear as a conscious political instrument or more as an unconscious imaginary?

The works of Fear/Miedo and Miedo/Jauf are related to the fear of the border. I like to define fear as what happens before and after violence. In these terms I understand very differently the perception of fear from the north to the south, than from the south to the north.  The north is afraid of the south because of a lack of knowledge of the culture and language that leads to uncomfortable situations. The south is afraid of the authority of the north, which is closely linked to migration situations and transit difficulties. Both works are part of the On Traslation series, which brings us closer to this concept of translation not only linked to the language but also to its context. 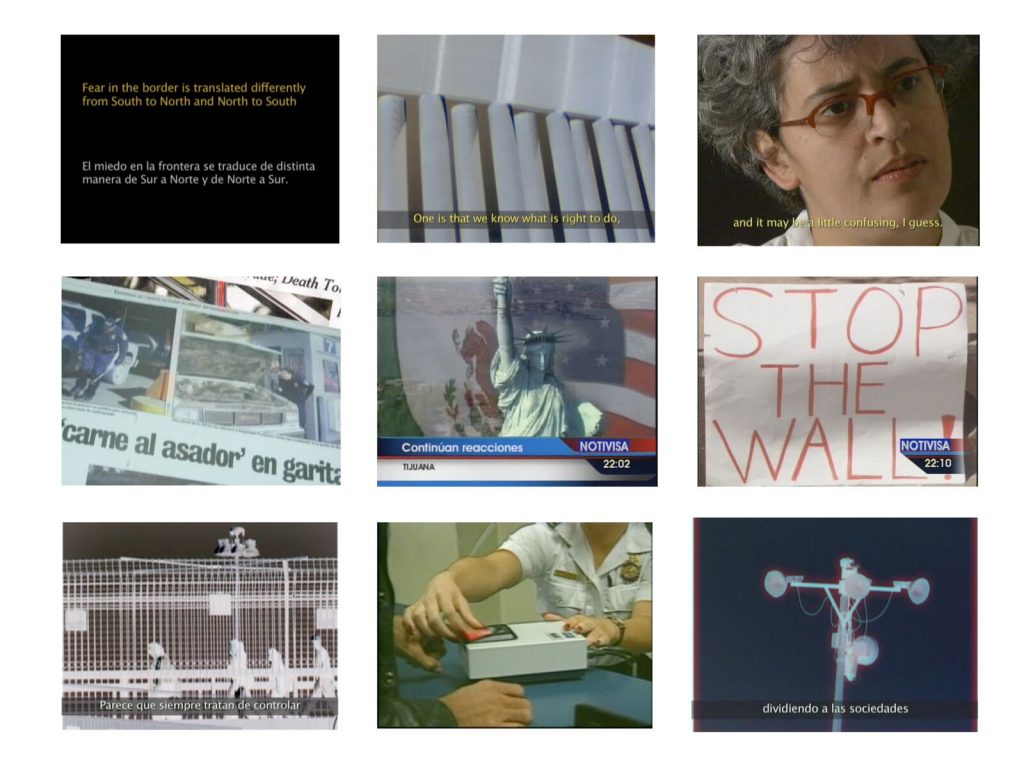 I find the perceptive play that he proposes in relating words and images very interesting. What can you tell me about it?

In the case of the CGAC in Santiago, the works meet and pose a reflective pause. I would like this exhibition to be understood as a reflection of all that displacement implies in the different contexts, taking into account the activities, processes and experiences that are gathered in each of them. It is a slow and thoughtful exhibit, so 12 benches with written words have been added.  Transiting, transcribing or translating are some of the words that help to frame certain parameters that guide the viewer’s gaze, leading him or her to wander and walk in relation to the concept of displacement. To stop and reflect.

I use words linked to images as a form of “acupuncture”, superimposing them on the image and fixing the viewer’s perspective where I am interested. In some ways they function as critical filters, as guides that take into account the inevitable subjectivity of both myself and the receiver.

To close, I wanted to ask you a more general question. What has the communities meant to you in relation to your work?

There are many types of communities: I participate in the teaching community which I believe is complementary to a more personal practice, obviously with a relationship of exchanges more than purely unidirectional. Another is the artistic community that ends up distancing itself due to its post-study and nomadic way of working.  Finally, there is a very close community that is the people I work with on a continuous basis or with on-site at the place.

The exhibition, curated by Alicia Chillida, will remain at the CGAC until June 17, 2018. A suggestion in which social sciences and communication systems are articulated through artistic languages composed – as Simmel would say – of “research into the internal meaning of modern life and its products, or rather, in other words, into the soul of culture, which must seek to resolve the equation that territorial structures propose between the individual and supra-individual contents of life.

Knowing this “soul of culture” and deducing how it influences human life is the aim of an exhibition linked to displacement, to the importance of a journey in which we become ethnographers, anthropologists who construct impressions of a journey by walking. A journey that will last as long as our lives.