The experience of being in an art exhibit might be energizing, complicated, or even disturbing. Usually, this happens because of the unidirectional interaction of us, as viewers, towards an artistic proposal where only our eyes translate the information into a feeling. However, there are creations that invite us to link them through interactions, maintaining a intimate (personal and social) relationship with said piece using our senses.

Some artists have proposed to develop a dialogue and interaction between their work and the viewers. We can find pieces that stimulate curiosity, enigma, and even enjoyment, so for the artists, it is how the the audience show their real interest for arts. 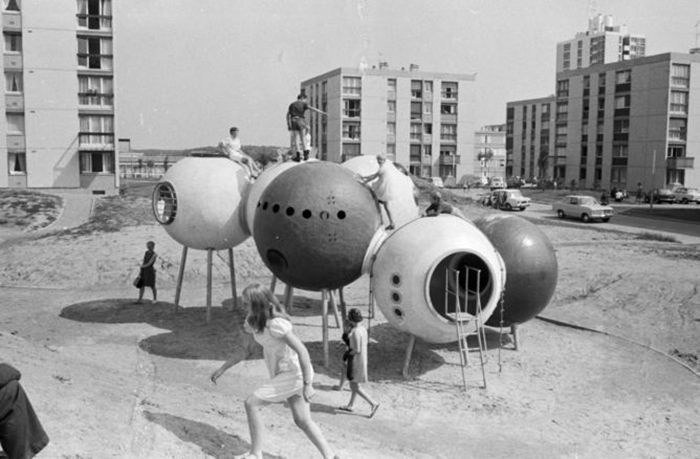 A popular interactive project is The Playground Project. The installation, in which participated Thomas Schütte, Claudia Comte, Alvaro Urbano y Ólafur Eliasson, is based on an architecture project—named as such—consisting on playgrounds constructed in the mid-20th century, after World War II. The exhibition in Kunsthalle Zürich, an important Swiss art room, was presented in 2016 by architects, artists, and designers who not only wanted that children enjoy the installations, but also that public spaces could have these vibrant designs. 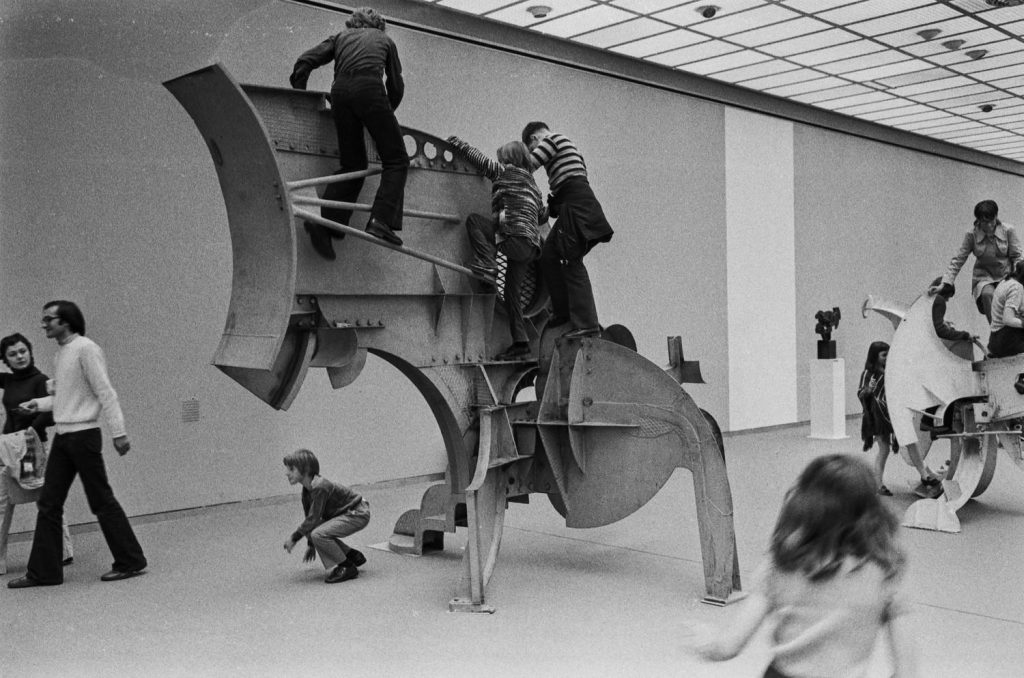 “The curatorial concept was ‘definitely an exercise to go off the limits of art, architecture, landscape architecture, history, and education.’ That’s how the playground, a niche in the city, became the ideal place for producing that kind of themes,” says the curator of the project, Gabriela Bulkhalter.

Children were invited to play in a more fearless way using an undulated gymnastic bar, a big sandpit with steel buckets and spades, a jungle made of ropes, and swings. Parents were invited to keep their attention at the platforms which are different from the ones called ‘safe for children.’ All of this was made with the purpose of explaining how art intervenes in common places and what’s the influence of it regarding our relationship with spaces. 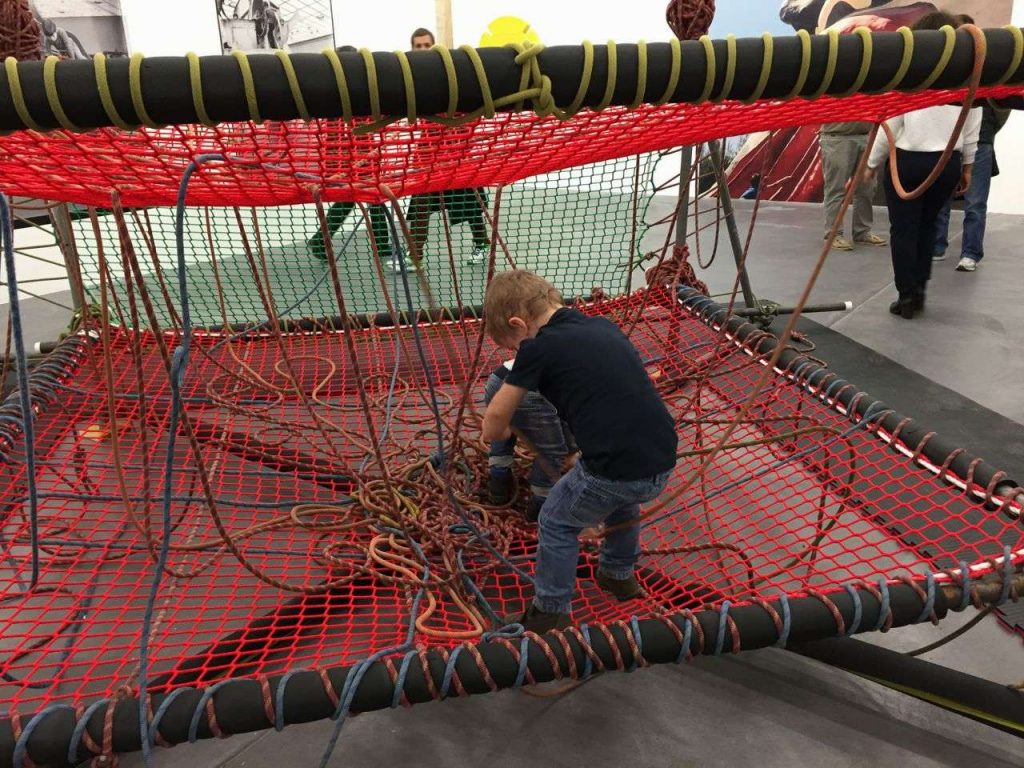 The main attraction is the Lozziwurm, an interlocking worm-like plastic structure in which children can climb, hide, and slide. It’s a copy of the one created by the Swiss sculptor, Yvan Pestalozzi, in 1972, used in many playgrounds to invite people to have fun with an exuberant artistic project.

As part of The Playground Project, the Belgian artist, Carsten Höller, installed in Bundeskunsthalle facade—one of the most important museums of modern art in Bonn, Germany—a 35 meters long metal slide which will be there for an undetermined period of time, stating as a fact that it’s fun leaving that type of structure in such solemn places.

Other installations, in which the public can interact with, are more complex. In Ólafur Eliasson’s work, The Weather Project (2003), he contained a ‘warm sun’—or the illusion of one—using monofrequency lamps that emitted a low-intensity light and filled the space with a gold yellow shading. Some people pass through quickly, but others spent hours watching it while laying on the floor, enjoying the fantasy of  a summer sunset in the middle of winter. 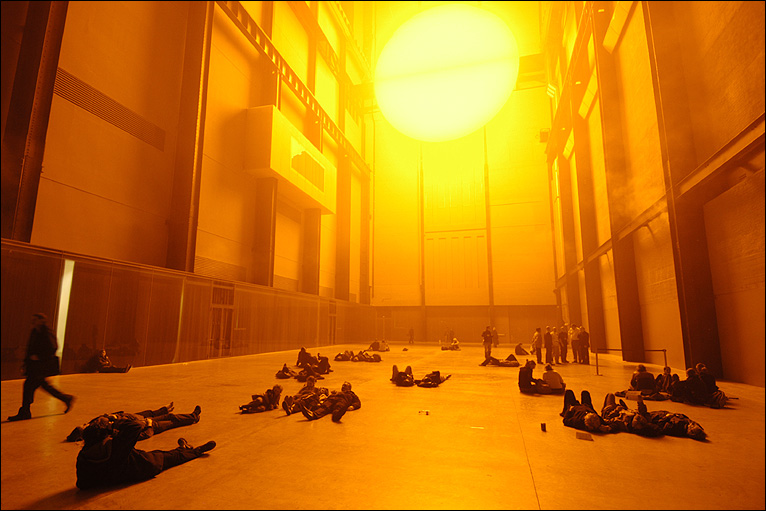 In Blind Light (2007), the British sculptor, Anthony Gormley, invited the audience to disappear under a light beam and instead of letting them see what surrounded them, hide everything behind a shining light in which the piece—located inside a gigantic cube—was submerged. This illusion is touching because a blinding uncertainty is placed on a sort of safe space.

More intense sensations are also presented because people can feel happy, warm, and curious. In Glassphemy! (2010) David Belt, a conceptual artist, took into account the idea of recycling and dare to play with it by letting the audience throw glass bottles inside a steel container specially designed for the project. The interesting thing was that the container was transparent, so when people threw a bottle, they would have been aiming to somebody on the other side of the bin. This is a psychological, aggressive action for both individuals. However, it was safe and nobody was wounded.

Thus, art also invites people to interact. By playing, using illusions, or “what is forbidden,” we don’t know how the audience is going to react, especially when they are allowed to do whatever they want. In some way, giving people so much freedom might lead to not only consequences related to enjoyment or fear, but also regarding to unexpected situations. Considering this, we wonder how an exhibit affects the way we make decisions.