For first time the National Museum of fine arts, gather simultaneously the work of José Balmes (National Award 1999), Gracia Barrios (National Award 2011), Roser Bru (National Award 2015) and Guillermo Núñez (National Award 2007), just like if you got four cardinal points, that in the case of this 4 National Awards they are four fundamental referents of our painting,  given that they arise from the deepest roots, interweaving their work with the contingency both universal and profoundly Chilean.

From an urgent painting that went hand in hand with the events of an era, until assuming a commitment, social and political, marked not only by testimonial character, resistance or exile, but by a tremendously human vocation, Because through his work, one manages to delve deeper into the homeland, recognizing his fissures, his wounds, but also that poetic vein that is so much our own and that makes us rebuild part of our personal and collective historical memory, with a Perspective always hopeful.

Thus 4 National Awards, started with José Balmes (1927-2016) who since his beginning in the informality deselect of the academy, makes of the stroke’s gesture and the materials an Axis that moves his work from paper to wood, from spray to collage and from a rough trash bag to those restless Parisian leaves that fly on an unprepared fabric. This affluent material gives rise to a telluric proposal denouncing American intervention in Santo Domingo (1965), Vietnam (1968) and Portrait of Ché Guevara (1968), foreshadowing a hecatomb, which would later crystallize in a great No (1972) Alert, which would finally resonate as an echo content in September 1973 (1977), Unleashing a sequel of works, where the metaphor is the answer to evidence a bloody reality expressed in Corps, Untitled and Fragments, all works of 1980, which highlight the epic character of its protagonists, as happens in Tribute to Rodrigo Rojas and Carmen Gloria Quintana of the fallen series (1973-86) and Central Coast (1988), where inhumanity reaches its highest point. Nevertheless, Balmes continues to believe in man, and proves this in Pan (1991) with his emblematic marraqueta, symbol of his daily dispute.

Simultaneously Gracia Barrios (1927) shows us how his painting shifts from figuration to abstraction in Figura Recostada (1966), Presencia (1967) and in Acontece (1967). A compositional and aesthetic passing that soon spliced ​​with his social and political commitment derived from the people and the clamor of the multitudes, evidenced in the series America I do not invoke your name in vain (three works from 1970 to 1971), and La Pobladora ( 1972), Fabrics through which indicates the course that followed Latin America. A process abruptly truncated by this wave of coups that devastated the continent and which she portrayed in Venceremos (1975), transferring the pain, those dislocated faces and the tearing of the patriotic flag, symbol of a shattered dream, which is also lost in Repression (1975), On the Street (1987), A Rodrigo Rojas (1986), Untitled (The University Violated -1986) work with José Balmes his inseparable companion of work and life. 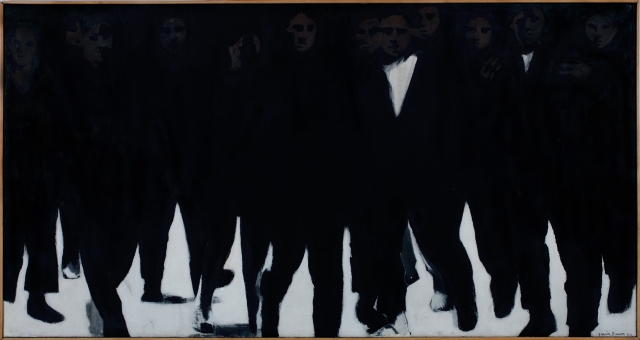 Roser Bru (1923), on the other hand, presents us with a different emotional potential, making the figurative an enclave that allows him to interweave matter and historical memory, as can be seen in Tierra seed (1961), Return to the Olive Trees (1962), The Lady Of Elche (1986), Death of a soldier of the Republic (1975), Moment de la mort (1979) and Engraved Image (1979). Proposals in which to recall, evidence a notorious commitment by the human being, which extends to works with a marked pre-eminence by the female figure portrayed from his most intimate daily life in Figure concentrated (1962), Woman with its parts (1968), Untitled (triptych in patchwork 1972) and Also you can be beautiful and loved (1972). A common reference to a criticism, but also a reflexive vision, where symbols of his iconography such as fertility, childhood and death converge. Matrixes thematic where in addition it excels the sublimed figure of the heroine as in Anne Frank (1978), A triangle and the Mistral (1993) or Portrait of a disappeared (1986). 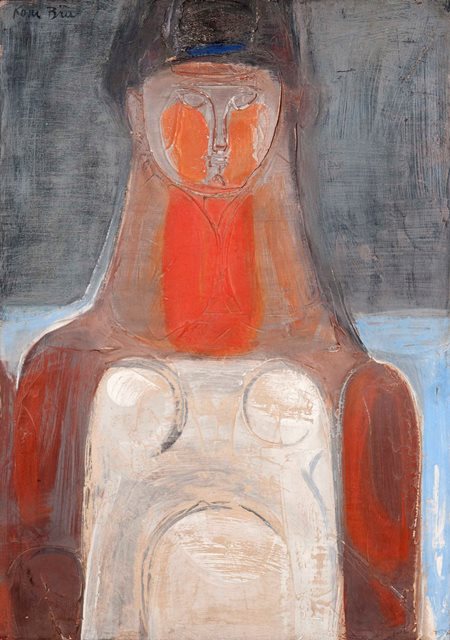 On the other hand Guillermo Núñez (1930) visceral and contestatario, moves us with works where of the pain is an atavistic companion of route that manifests from its beginnings with an unmasked vision in the submerged origins (1963), Agoniza the crushed rose (1963) , He breeds oneself (1965) and in Still in my dreams (1965). A work that gradually becomes steeped in a more pop – lytic juncture in El grito (1967), A better half heart (1967), and Heroes to cut and assemble (1969). But where he does his own verses Neruda – “Although the steps touch a thousand years this site, will not erase the blood of those who fell here,” is after living in flesh the ravages of repression and exile. Transition that becomes evident in the painful asepsis of white, dramatically covering a painting dominated by that horror that undermines the soul as a flayed exposed blast in Sculpt with pain a tremendous cry of hope (1976), Recado de Chile 5, ¿ With what water will we wash the blood of the rivers? (1976), which does not appear in any list (1978), making his office a shrill exasperation of denunciation and registration.

Finally, 4 National Awards, is without a dude a unique sample, where the legacy is recognize, the testimony and the aesthetic quality of his authors. Highlighted particularly the curatorial labor makes for Inés Ortega – Márquez, who put special attention in the nature of the artworks, choosing pieces of different format and techniques, such as painting, collages, engraving and even textiles that let us glimpse, how and why they were conceived, generating a corpus, integral between the artist and his existence, a visible sign of his time.