With the inaugural exhibition Una Imagen Llamada Palabra, opens the new Cerrillos National Center for Contemporary Art, pioneer in Chile for being dedicated to conservation, investigation and exhibition of current artistic heritage, congregating more than 50 visual artists, photographers and poets that open this initiation dialogue.

Built during Carlos Ibáñez del Campo government, Los Cerrillos airport worked as one until Pudahuel airport opened in 1967 –today Arturo Merino Benítez– and became an airdrome until the beginning of 2006, launching the project Portal Bicentenario, where it is placed this National Center for Contemporary Art with more than 4.000 square meters and an exhibition that comes from 1967 to the present. 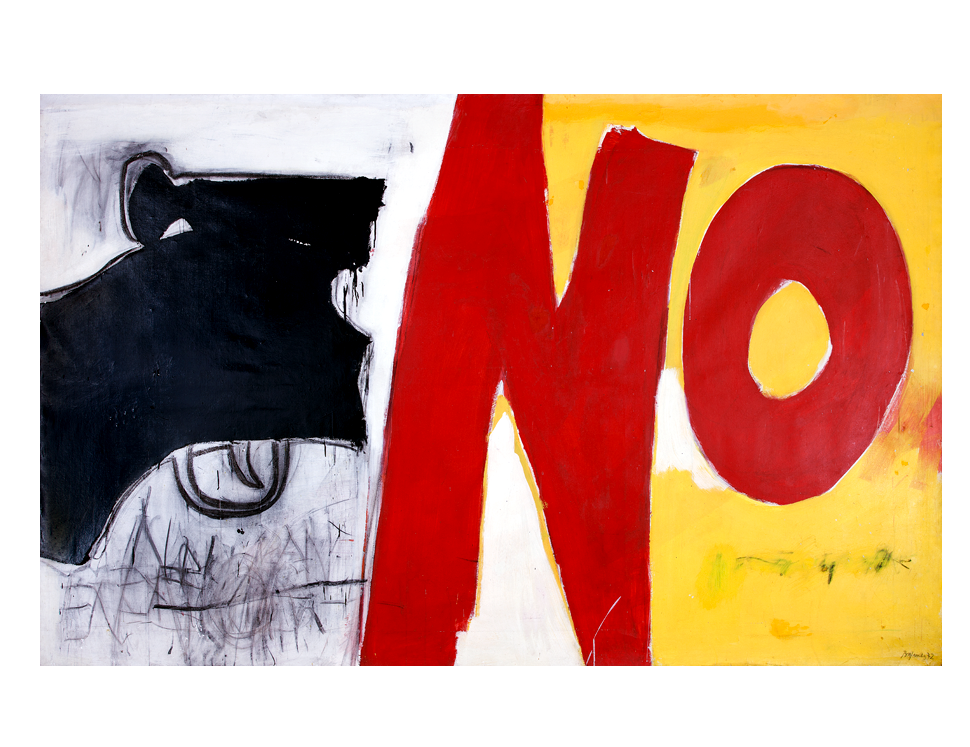 Inside the exhibition, we find the work of the ones who tried to break the predominance, resignifying the artistic construction –not only in shape– by adding diverse raw materials and technical resources, but by being part of the world boiling for changes, like May 1968 in Paris, the Prague Spring, the Vietnam War or the posterior series of coups –including Chile in 1973– with which the art suffers a brutal rotation that impacts from painting to art installation, as critic space of the predominant sociopolitical system. A rupture that leads to, besides the great skepticism about utopias, an influential disruptive action that echoes the idea of representation, with a diversified narration of realities that coexist at the same time, as a vehement sequel started with No (1972) by José Balmes, that is a desperate scream facing the coup threat, remembering what he lived in his birthplace, Spain.   Equidistantly there is Mujeres (1979) by Gracia Barrios, where represents the breakdown of memory with a great white cross tearing the whole fabric apart. In a different setting, but not less significant, is born Eman sin pasión/ Parti sin passion (1974) by Cecilia Vicuña who via “palabramas” and words crossover –emancipation and participation– suggests to change reality in a poetical way. Fact that Raúl Zurita emphasizes in La vida nueva –poem written under New Yorker sky (1982) to pay tribute to the Spanish speaking population, generalizing the focus.

After this, we go into a diverse codes search stage, making a scathing and hided irreverence to a vocabulary where appears Carlos Leppe’s vision, who uses his body as object of subversion through La acción de la estrella (1979), key component of the national emblem, representing the calamity to the body of a sick Chile. Symbolism that also appears in Arturo Duclos and his Estrella Negra (2015), assembled with human femurs and death as the only answer; or Lotty Rosenfeld and the video El empeño latinoamericano (1998), where using the Tía Rica depicts ironically the state of the continent, generating a cathartic mockery that reaches a bigger grade of liberation when decompresses the pain, bumping into the ones that direct their work to a conceptual art that widens the aesthetic dimension to barely explore fields. Same line where we find Juan Downey and his With energy beyond these walls/ against shadows (1969) and his schematic drawing of audio kinetic sculptures electronically operated and Francisco Smythe, who, by intervening photographs of missing people in the series Perdidos (1974), mends the voluble reality, giving up the path to a necessary counterpoint with symbolic representations and abstractions that, when questioning, oxygenate the visual discourse without archetypes.

Complementary to this, it is Viuda (1985), by the group C.A.D.A. placed by Nelly Richard as part of the “advanced guard scene”, along with Alacranes en la marcha (1994) and Abecedario (2014) by Pedro Lemebel. Eugenio Dittborn contributes with La XXVII Historia del Rostro (Lejía) and Pinturas Aeropostales nº 158 (2004), work built with faces, drawings and photos of antiheroes tore off anonymity, until getting to Claudia del Fierro and her video installation El Complejo (2014), where testimony is the emotional base of a frame lacking of delicacy that faces and embodies the severity of a period of time. Context in which also coincide intimate portrays of the mother of detained-disappeared in El amor ante el olvido (2007) by Claudio Pérez; and the reflection about exile of Rodrigo Gómez Rovira in Archivo de Repertoire (2014), but also in In Memorian (2008), where Alejandro Olivares depicts marginal neighborhoods murals. Street inquiry that Luis Weinstein continues with those everyday multiplying warriors in Esto ha sido (2015) and that extends to the continental photo-journalism of Tomás Munita in the series Las Maras, vivir y morir en Centroamérica (2012), that plain and simple contrasts with Paz Errázuriz in Ester Edén, mujer Kawesqar en Puerto Edén (1994).

In this transition also appears who, from a parallel angle, resort to a language where support is the essential composite main idea for the shapes to play with their own content, as in Si lo puedo hacer aquí, lo haré en cualquier parte (2007) by Hoffmann’s House, where 72 artists living in Santiago and Nueva York intervene as a self-copying bank application to create 144 singular drawings. In contrast, emerges the monumental character of the ten layers of natural wooden felt trimmed by hand, by Mónica Bengoa, in Algunas consideraciones sobre los insectos, Abejas de antenas largas (2010); and Carolina Ruff, who adds the embroidered work Intervalo (2013), as a fragmented part of a dual façade between the ephemeral and the permanent. Representation that extends tangentially to Doble exilio (2013), the last work that made Garcia Barros along with José Balmes and that depicts that art is as perennial as this cardinal conversation.