The best selection between 82 951 photography, realized by 5 755 photojournalists of 128 countries, arrives to Chile and to Espacio Telefónica with the exhibition World Press Photo 16, the most important of the world photojournalism exhibition.

From the rock art decorated with hunting pictograms to a photographer that send satellite pictures of a Syrian refugee trying to cross his baby through a frontier wire fence. In this exhibition, not only there is an immense timeline, also is the necessity to contain the volatility of the event and also to oppose to the trivialization of exposed pain in the news dedicated to the facts that, unconsciously, go in depth the capacity to amaze of those who wonder and indolent only see a screen. 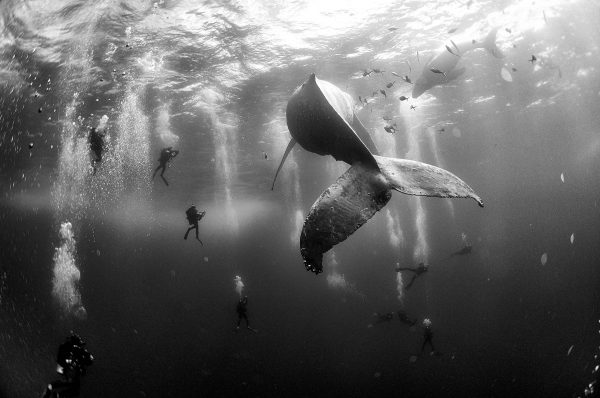 Dealing with the paradigm of indifference is the great work of the photographers of the World Press Photo, who despite the ravages they dramatize and express that others seek to hide or plainly and simply take away. Symptomatic fact that certainly leads us to reflect on the role of reporter, who without falling into rhetorical preciosity illustrates a world that despite being our collective memory, often do not see or refuse as a defense mechanism as they face the reality is more overwhelming than trivialize it.

Therefore the World Press Photo foundation, created in 1955 located in Amsterdam, distinguishes the photojournalists work in order to show situations where man is the object of man, but also others that beauty appeases the existential fluctuations, maybe not altering the course of history, but teaching us to value a appreciate a whale and her calf newborn swimming near Roca Partida (the smallest island of the archipelago of Revillagigeo), on the Mexican coast captured by Anuar Patjane Floriuk; photograph that indirectly makes a parallel to the synchronized swimming team of Stockholm that running position of the sailboat recorded by Jonas Lindkvist. In addition, we reflect ourselves in a group of orphaned orangutans in wheelbarrow walking in the devastated forests of Borneo, seen through the lens of Tim Laman; and understand that despite the evolutionary differences, we are all entitled to live and express ourselves, as did Lamon Reccord when challenged to a police during a march against racial violence in Illinois, and was recorded by John J. Kim, who simply kept silent; like Kevin Fraser, by portraying old men pushing their tricycles, while fireplace of Datong do not stop polluting, even knowing that 17% of deaths in China are caused by CO2 emissions.

A task that sometimes seems useless, however, as Pascal says: “It is dangerous to show man how like is to the beasts, without showing both its own greatness.” Something that involves such a vast and complex optics, it is not only portraying the flagellation of the world, nor the devastation of nature or the blood out of place, but revealing moments of life. Things that can be seen in works like a thirteen year old girl, Raheleh, blind from birth, who was seen by Zohreh Saberi when it was installed in the window of his home in Iran, to feel the sun’s rays. A trivial fact that liberates imaginatively a butterfly from its chrysalis. While we found chilling works, like the Syrian girl from a hospital in Damascus, watching helplessness toward the camera Abd Doumany, claiming to be assisted. Interpellation that takes Adriane Ohanesian through Adam Abdel, seven years old, who exhibits traces of burns suffered after the bombing of his home in Central Darfur, Sudan.

“To take photograph is not only a remote shutter”

Although many photographs shaking, disturbing and disturb for their crudeness, there is always a compensation. Rohan Kelly surprises us with a shot of Bondi Beach, Australia, where a huge cloud threatening rushes while unperturbed bathers are taking selfies, showing how apathy is part of daily life, at the point to ignore their own environment. Issue that can be replicated to other people’s suffering, as not belonging seems to go hand with disregard, which in any case could make Nancy Borowick, recording their parents who died just a year apart as victims a fulminating cancer, making it clear that taking pictures is not reach and seal distance.

Therefore, the role of the World Press Photo is so relevant as it calls into question those who believe that photography is only limited to good choices or focuses, dismissing the role of the photojournalist, who without fluttering draws his camera. As did Warren Richardson, who taking advantage of the moonlight achieved the winning image of the 59th version of World Press Photo 2016, on the border of Serbia and Hungary, where it was impossible to use flash, because it alerted police, putting endanger the lives of 200 refugees holed up behind wire fence. 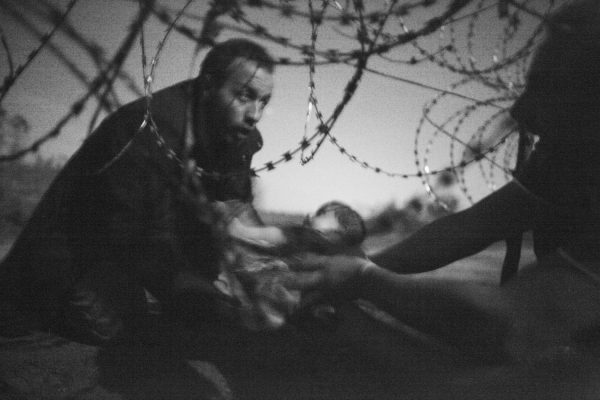 Act of denunciation and recording that ultimately is seen with resistance by many, but few dare to develop as part of an ethical commitment through visual chronicle, which even defies what Elizabeth Edwards told in the book Anthropology and photography: “the power of photography as a truth carrier document involves both a contradiction, since photography is always a choice of what to display to the receiver as truth or reality”. Event that in this exhibition does not imply partiality or subordination, but above all an undeniable testimony of how afflicting the world and that complements what was said by Giorgio Agamben: “Being contemporary means keeping your gaze fixed at the time”, in this case, summarized in 145 remarkable photographs that cross many categories as realities they face.